Using my mother’s fountain pen, I scratch misspelt words onto paper. I am writing a play in which my sister, Camilla, is the star. I am five, Camilla is eight. We are roughly the same height, have the same long, dusty blonde hair and share the same love for storytelling.

This play is inspired by parts of the 1980s Cannon rendition of Sleeping Beauty – a movie that Camilla and I watch over and over again, pausing at specific parts to re-enact moments of drama. I am particularly inspired by the good fairies, so much so that the play I have written is about “the fairies that live in our Hong Kong jungle garden”. As I write, I make a conscious effort to exclude a dark witch or a malevolent force. 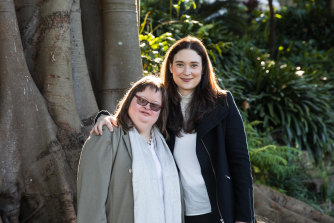 I give my sister her lines and attempt to dress her in a costume consisting of my mother’s best clothing and Halloween fairy wings.

“You are the banana leaf fairy, and you shade people from the sun. You protect people. They come from all over the world to see you because you make their hearts happy.”

Camilla laughs at me and shakes her head. “No thanks. I am not the banana leaf fairy.”

She takes out her portable cassette player and plays Tina Turner on full volume. She discards the fairy wings along with the lines I have given her, takes her pick from the items of Mum’s clothing and colours her cheeks with Mum’s lipstick. Under a patch of summer sun, she dances like her life depends on it.

Her movement is contagious and soon I find myself dancing with her. 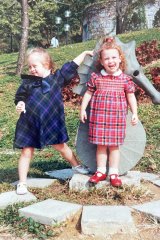 Camilla lives with Down syndrome – a term given to the condition of having an extra chromosome that causes a spectrum of intellectual and physical disability. Growing up, all this meant to me was that she needed help tying her shoelaces, or sometimes when she couldn’t pronounce a word properly she would ask me to say it. I was aware of people who treated her differently, in particular the sympathetic looks they gave with the frequent comment: “She is so lucky that you and your family take care of her so well.”

I never understood this. Camilla was a born performer. She would grab every opportunity to be on stage and was usually the lead in her school plays. When we were in public or in the middle of a crowd, she would burst into song, dance, perform segments of a movie she loved or re-enact a funny conversation she had had with someone. This was a nightly occurrence at our dinner table.

When she was a young teenager, she was cast in Shakespeare’s Romeo and Juliet as Juliet. Her boyfriend at the time was cast as Romeo. She tirelessly practised her lines each night and nailed it on the night of the performance. At the end of the play, Camilla’s Juliet stabbed herself with a dagger, but as she fell to her death she realised the goblet was in her way.

“Oh crap.” She sat upright, moved the goblet, and died for a second time. 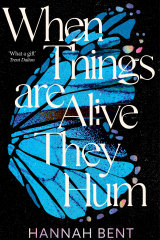 When Things are Alive They Hum by Hannah Bent

Camilla always did things her way.

There is a mysterious, other-worldly aspect to my sister that I can never quite define. This is perhaps due to the way she could intuit what someone was feeling despite the front they displayed to the outside world. Many times, Camilla has quietly held a family member or friend’s hand when they were silently suffering and hadn’t spoken much about it. Camilla will gently stroke the surface of their skin, rendering them teary-eyed.

Camilla was an avid skier. On one occasion when she was about 10, she and her skiing instructor were caught in a snowstorm. It was so bad you couldn’t see your hand if you held it to your face. She is completely blind in one eye and has about 10 per cent of normal eyesight in the other due to congenital cataracts, yet she led her instructor down the mountain, giggling and yodelling.

This mysterious quality captivated me as a child, and I find it appearing in my writing. I often think about the fairy play I wrote as a child and my desire to exclude any form of darkness from the tale.

When Camilla was 16 years old, she contracted encephalitis – a brain infection. She was in critical care in hospital for several weeks and was completely paralysed. She also lost her speech. For a while the doctors told us that they weren’t sure she would survive. Although she regained her ability to walk and slowly re-learned some speech, overnight we lost the enigmatic, intuitive performer we knew. In her place, we slowly got to know a different Camilla. She seemed vacant, uninterested in life, and when I looked into her eyes I felt as if no one was there. Often, Camilla would just sit and stare into space. For years I thought the Camilla of my childhood was gone.

And then one day Camilla picked up a paint brush. She began to paint beautiful, intricate works of art in watercolour. Her images had movement and stillness in just the right places. I noticed common themes in her work: she loves to depict angels and flowers.

Many years ago now, Camilla presented me with a painting – of a large heart in bright and bold colour. It is like a babushka doll – inside the biggest heart is another heart – a heart within a heart within a heart. Around the middle layer are glowing lights, and in the centre there is a star. She titled this piece: My Gypsy Heart.

Camilla had found her voice again. And perhaps so had I.

I have written a novel, inspired by Camilla. This time in my work, I could not avoid the darker, harder experiences that can find you in life, but for the most part while I was writing this novel I had Camilla’s Gypsy Heart painting above my head. Her colour and bright lights kept reminding me to write deeper, and deeper until I found meaning and sometimes solace in the words that worked themselves onto my page. Life has a funny way of surprising me, of revealing itself to me in ways that I least expect. I do believe Camilla has given me the gift of vision, and of courage. When I am feeling brave, I can meet life the way it wants to meet me; with a glowing gypsy heart.

When Things are Alive They Hum, by Hannah Bent, is published by Ultimo Press on July 28.

The Booklist is a weekly newsletter for book lovers from books editor Jason Steger. Get it delivered every Friday.

21/07/2021 Lifestyle Comments Off on My sister has taught me to live with a ‘brave, glowing gypsy heart’
Lifestyle