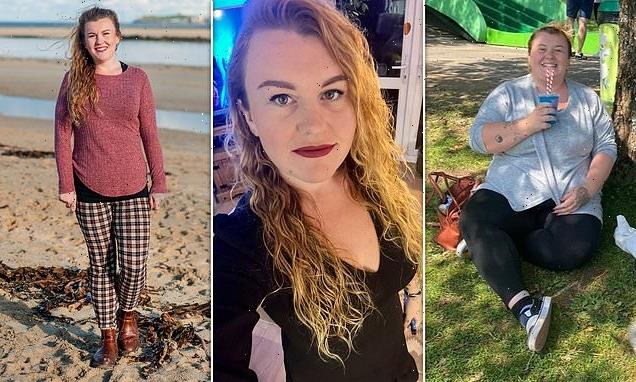 A mother-of-two who suffered from anxiety attacks and was self-conscious about her frame, revealed how she shed half her weight by refusing a gastric band surgery and embracing a healthier life style.

Sophie Ratcliffe, 29, from Hayle in Cornwall, tried many times tried to lose weight in secret because she was afraid of being judged and was embarrassed about her 23st 13lbs frame, but nothing would stick.

In 2021, her GP recommended gastric band surgery, but Sophie decided against the procedure, instead focusing on developing long-lasting healthy habits.

More than a year on, the mother-of-two, whose children were bullied because of the weight she put on during lockdown, credits her hard work and being open about her weight loss goals with losing an impressive 11st, and now weighing 12st 13lbs.

Sophie Ratcliffe, 29, from Hayle in Cornwall went from weighing 23st 13lbs, left, to 12st 13lbs, right, after she became more open about her weight loss goals and adopted a healthier lifestyle.

Sophie said ‘My health was declining rapidly, I couldn’t walk up the stairs without being out of breath or sitting down.

‘I wasn’t sleeping and I did absolutely no exercise. My son was being bullied at school because of my weight which made me feel so guilty, but I didn’t know where to start when it came to changing things,’ she added.

Sophie explained she put on the weight during lockdown, where she took up snacking and baking with her children.

The mother-of-two joined her local Slimming World group with friends, but did not believe she would succeed. 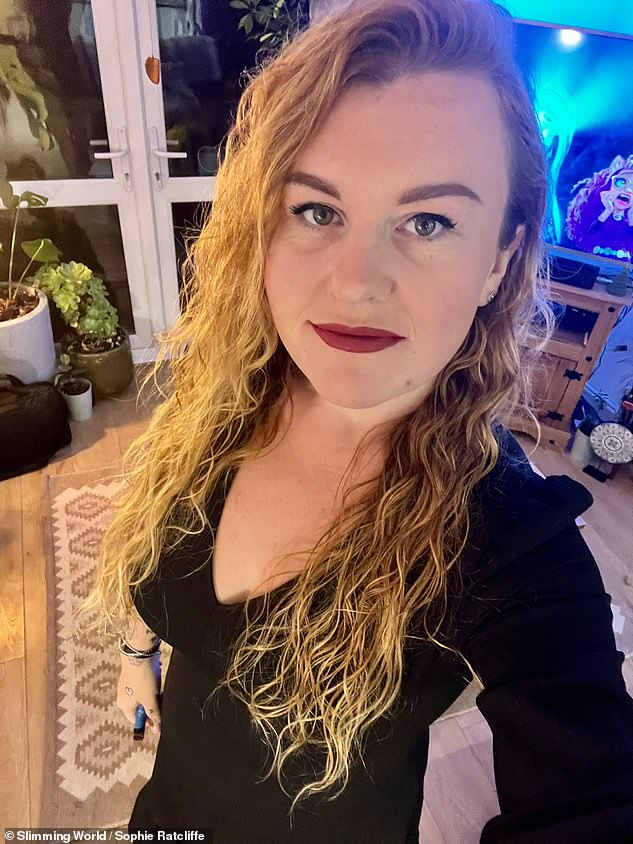 Sophie admitted her children used to be bullied because of her looks, but that this stopped when she lost the weight

‘I’d tried so many ways to lose weight, I never told anyone though because I was sure I wouldn’t succeed – just like all the times before,’ she said.

She secretly hired a personal trainer but along with the exercise plan there was a protein shake diet, and Sophie  knew she wouldn’t be able to stick with it long term because it left her hungry.

And she was equally sceptical when she joined Slimming World, but her fears soon disappeared.

‘When I joined Slimming World I was embarrassed at how big I’d become, but no one in the group ever made me feel this way and I left the first session feeling hopeful for the first time. 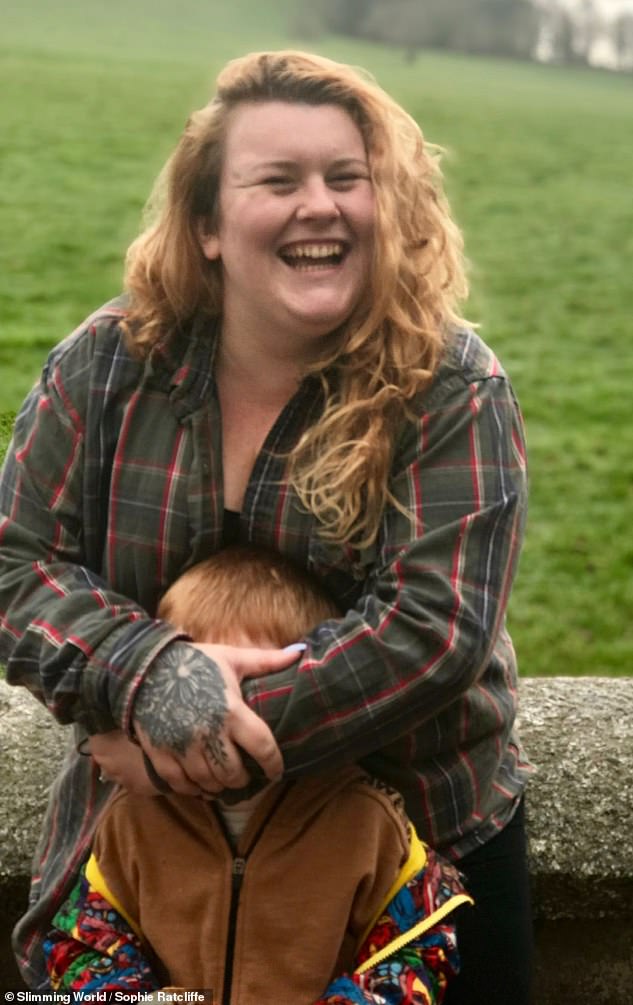 The mother-of-two, pictured before her weight loss, admitted she piled on the pounds during lockdown in 2020 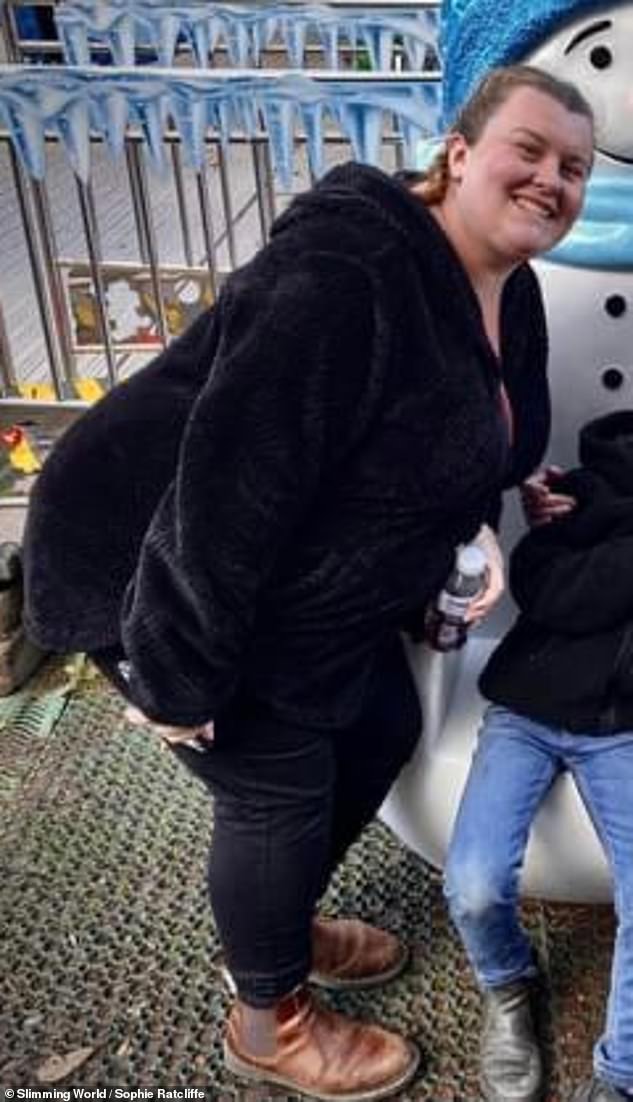 At her heaviest, pictured, Sophie felt embarrassed of her looks and was worried of being judged by others for her bigger frame

‘As soon as I understood how the eating plan worked – and that I wouldn’t have to give up all the foods I loved – and I met the other members who were such a lovely bunch of people, I knew I was safe and wasn’t going to be judged,’ she added.

Sophie, who still attends the group, said that it ‘keeps me on track and lifts me up when I’ve had a tough week.’

The mother-of-two said she experienced ‘one of the worst years in her life’ before starting her weight loss journey.

Breakfast: A full English fry up with lots of ketchup

Drinks: 6-8 glasses of water a day 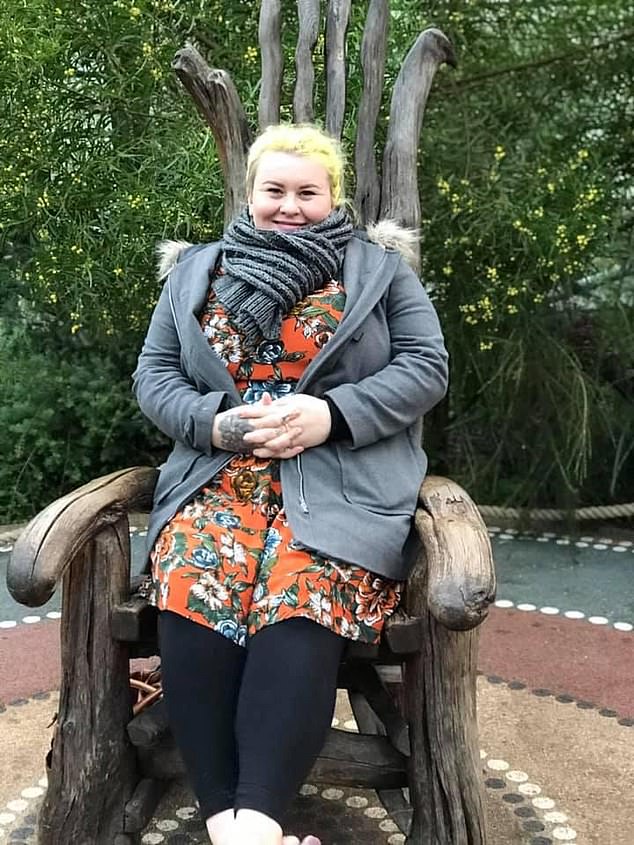 The mother-of-two, pictured before, said she tried several diets and was ashamed of her weight

‘In January 2021, I started having what we believed to be anxiety attacks, regularly around eight a day.

‘I also had a major seizure which was initially misdiagnosed as brain cancer and turned out to be epilepsy. I was put on medication to control it because the seizures could have been fatal,’ she added.

in spite of this stressful time, but thanks to the support of her loved one and her group, she managed to keep up with her weight loss.

‘I’m so proud that during such a difficult time, I stayed on track with my weight loss plans. I know I couldn’t have done it if I was trying to lose weight on my own. My Slimming World group and Charlotte, the Consultant who runs it, have been there for me every step of the way,’ she added.

Sophie is now enjoying the results of her weight loss and said she feels like a ‘completely different person.’ 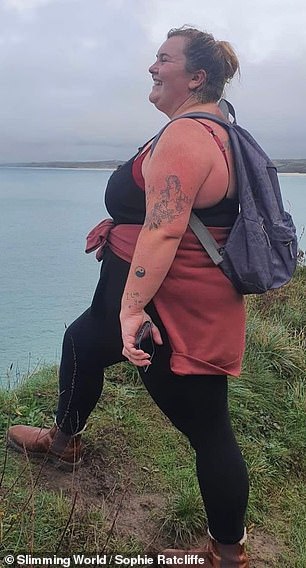 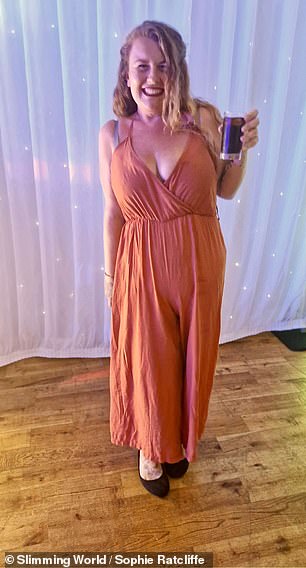 Sophie, pictured before, left, said she even tried to hire a personal trainer to help with her weight loss, but nothing worked 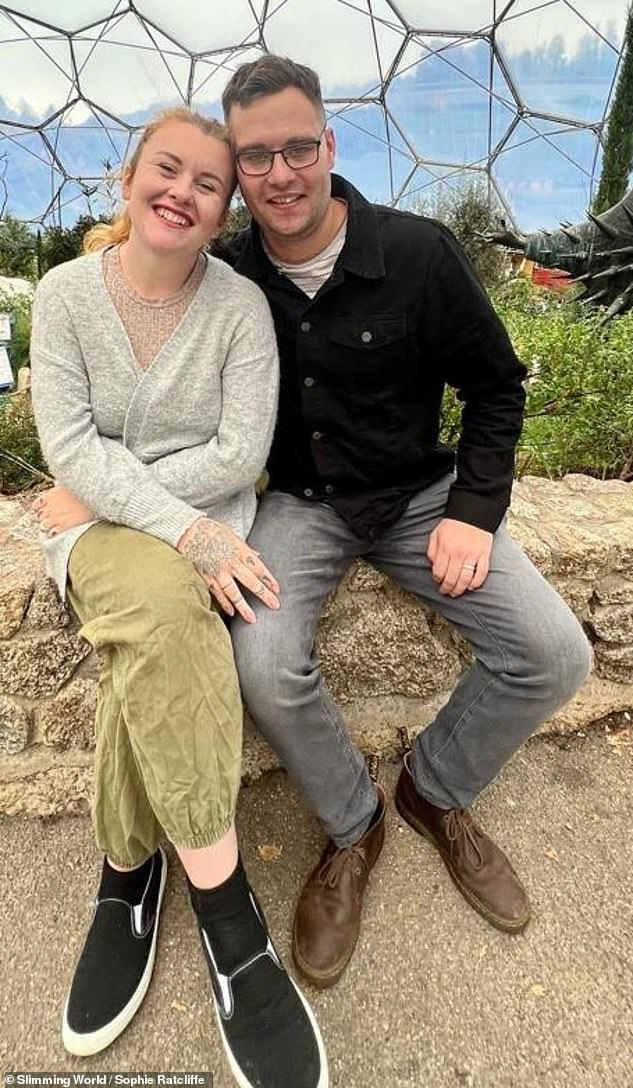 The mother-of-two, pictured now with her husband, said the weight loss saved her marriage and that her whole family is now healthier 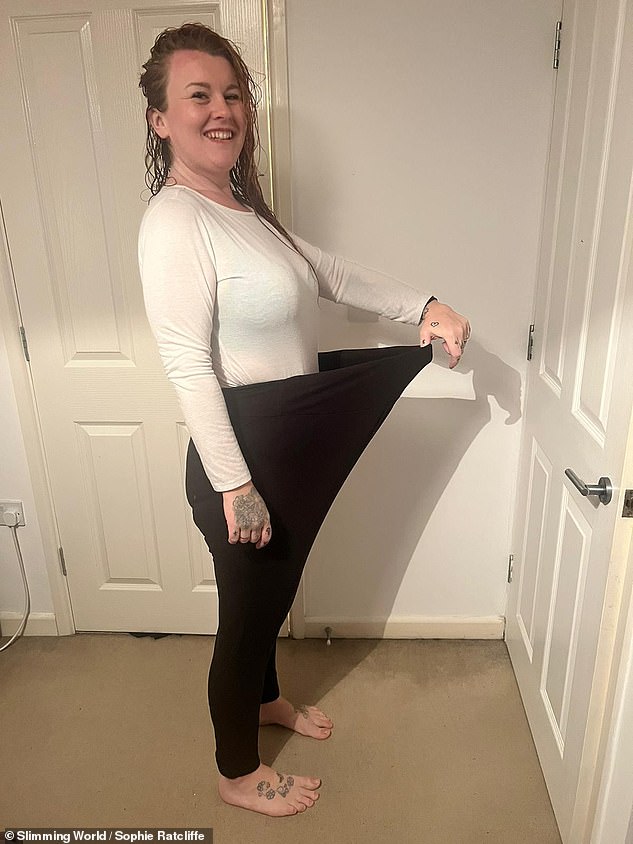 Sophie pictured now, proudly showing how much weight she lost. Sophie said she now feels better about her body

The mother-of-two, pictured now, has adopted a healthier diet and works out four to five times a week to maintain her weight

Sophie, pictured now, got a new lease on life thanks to her weight loss, after joining a local weight loss group

‘I feel I’m better equipped to deal with what life throws at me and I’m not letting life pass me by. I’ve lost weight and I’ve not had a seizure since August,’ she said.

‘I feel like Slimming World has given me a new family and I know I’ve given myself the best chance I can to be a healthy mum. My son isn’t bullied anymore and both children are very proud of me.

The mother-of-two said she looks so different from her older weight that her children don’t recognise her in pictures.

‘When they see pictures of me before I lost weight, they ask “Mummy, who’s that?”,’ she said. 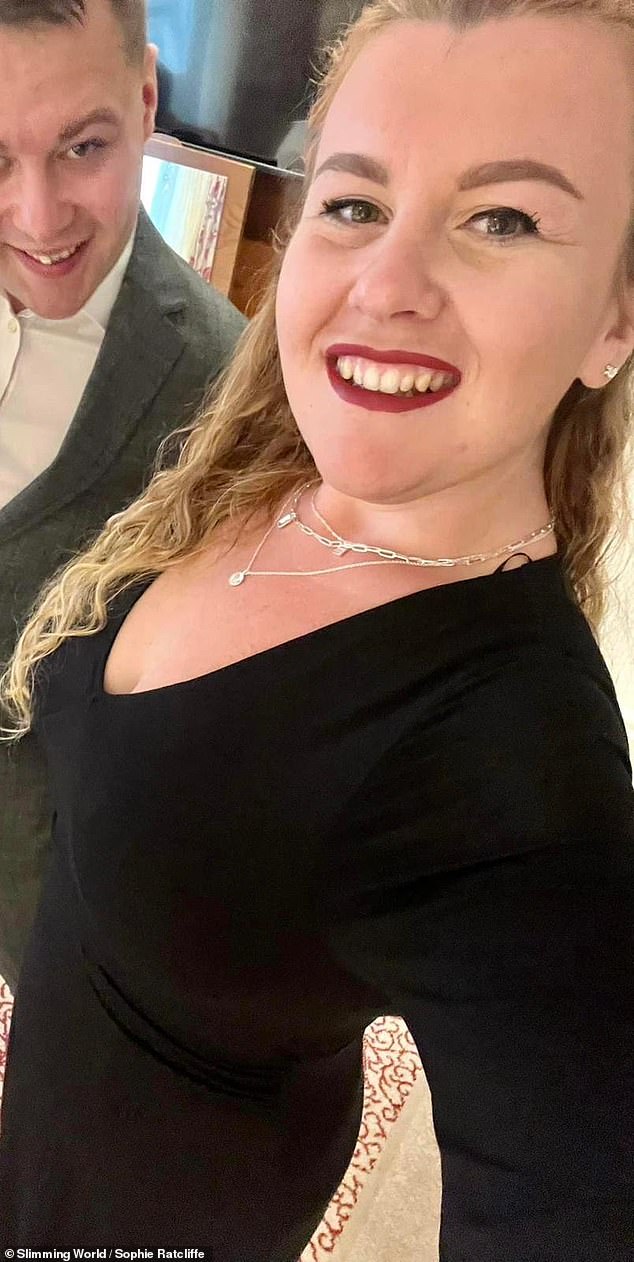 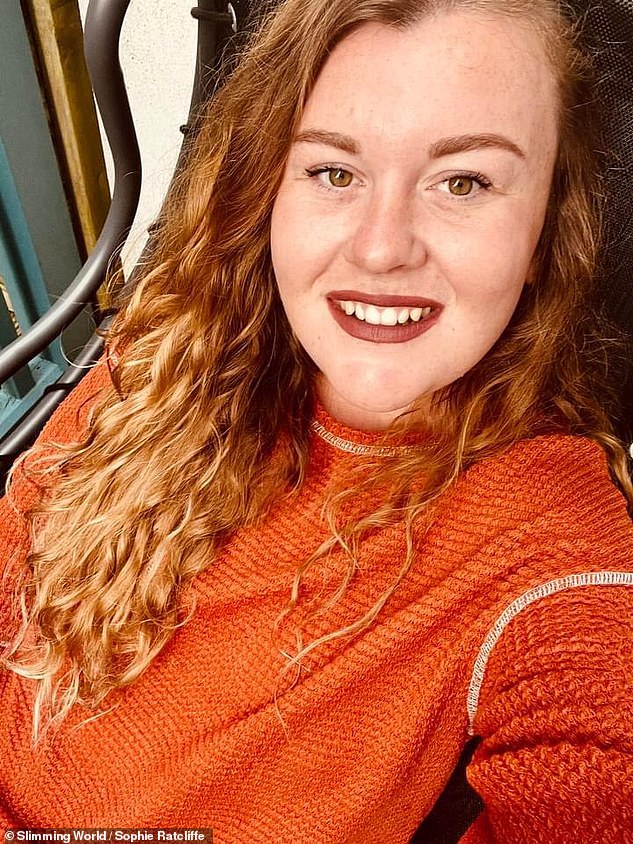 The super slimmer revealed her overall health has improved thanks to her weight loss. She would experience seizure and was diagnosed as epileptic before losing the weight, but the number of seizures has now decreased

‘When I saw both my epilepsy nurse and my neurosurgeon recently, they couldn’t believe my transformation and they tried to impress on me that it’s saved my life,’ she added.

The mother-of-two said the weight loss has ‘saved her marriage.’

‘My husband was so upset as he said he was watching me lose the bubbly person I used to be.’ said Sophie.

And now the whole family has adopted a healthier lifestyle thanks to Sophie.

The super slimmer revealed she went from doing no exercise at all to hitting the gym four to five times a week, and went from a size 26 to a size 12.

‘I enjoy spinning and cardio and the occasional weight training. I now know that exercise can be fun and enjoyable which I never believed before,’ she said.

‘Losing weight has changed my life – I feel like a door has been opened and I’m excited to keep exploring what’s on the other side.

‘Now when people see me out and about, they ask me what my secret is and how I’ve managed to lose weight and I can’t wait to tell them – and it’s funny my secret is that my weight loss goals aren’t a secret anymore,’ she added.

Sophie’s story comes as new research shows that joining a weight loss group is more effective than trying to lose weight alone, and that more than half of people have dieted ‘in secret,’ many because of hears of being judged or failing.

How attractive are YOU? Tracey Cox reveals the 13 science-backed signs that reveal if you’re hot or not – from a bottom that sticks out to a ‘fertile’ face