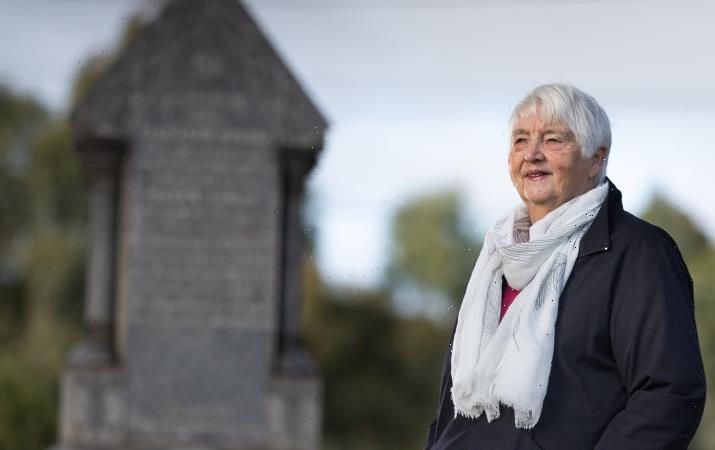 In an old cemetery in Melbourne’s north there’s a grave that contains a leg, and nothing else.

Researcher Beryl Patullo explains that in 1865, either through accident or illness, a woman’s leg was amputated. 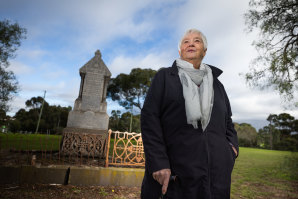 Grave honour: Beryl Patullo, secretary of Friends of Will Will Rook Pioneer Cemetery, has received a Queen’s Birthday Honour.Credit:Jason South

The limb is listed in the burial record of Will Will Rook Pioneer Cemetery, in Campbellfield, in Melbourne’s north. The woman – sans one leg – moved to northern Victoria and was buried there, more than 40 years later.

Patullo doesn’t know why the leg was buried. In elegant script, the register names the burial as ‘Mrs Duttons leg’. “Maybe they weren’t certain she would survive, so they booked the grave ready.”

It’s one of the many stories that Patullo has discovered at Will Will Rook Pioneer Cemetery.

For her volunteer work as secretary and treasurer of the Friends of Will Will Rook Pioneer Cemetery, Patullo received a Medal in the General Division of the Order of Australia (OAM) in the Queen’s Birthday Honours. 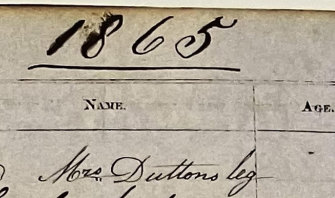 Burial records of the cemetery, dating from the early 1850s to the 1940s, were thought to be lost until Patullo pushed for Hume City Council to find them in their archives in 2019.

Patullo also found the cemetery’s cash transaction book in private hands, via an appeal in a newspaper.

The Friends group made storyboards at the cemetery about its history and people, and wrote a booklet about the 1600 known burials. They are still discovering others. Patullo runs a Facebook page and leads cemetery walks.

Among stories from burial records is how in the early 1900s the family of two local brothers, who died in the Western Australian goldfields, paid for their bodies to be exhumed, brought them home to Melbourne and buried them with their relatives at Will Will Rook. 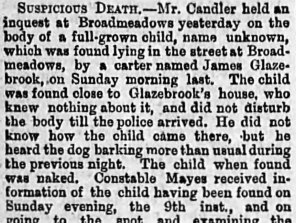 Report from The Age, June 13, 1878 on the inquest into a baby’s death at BroadmeadowsCredit:The Age archives

Also exhumed, after an inquest but before a police investigation, was a baby girl whose body had been found on a Broadmeadows street in 1878. Animals had dragged it from a secret burial place on a farm. A young local girl was found to be the baby’s mother.

Patullo, of Thomastown, first came to the cemetery in the early 1980s while researching her husband’s Scottish ancestors, 25 of whom are buried here. She became secretary of the Friends group in 2013.

Researching the cemetery and local history has become a good hobby and it’s satisfying helping people find information about ancestors, which she does for free.

“I liken it to being a detective. You like to find out that little piece that’s missing,” Patullo said. Receiving the honour was a surprise. “It’s not something I ever expected to get. But I am quite honoured”.

Patullo’s husband, Lindsay Patullo, also receives an OAM in the 2022 Queen’s Birthday Honours for his volunteer work with disability support and Freemasons groups.

12/06/2022 Lifestyle Comments Off on Mystery of one leg in the grave, and other cemetery tales
Lifestyle