Netflix issued an apology on Thursday after thousands signed a petition demanding the immediate removal of the controversial French film Cuties from the streaming platform.

The movie, about an 11-year-old who rebels against her family and joins a "free-spirited dance crew," is accused in the online campaign of sexualising young girls "for the viewing pleasure of paedophiles." Originally titled Mignonnes, the project premiered earlier this year at the Sundance Film Festival, where it won a jury award for directing. 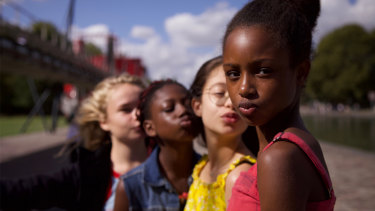 A Change.org campaign to delete Cuties on Netflix had amassed more than 100,000 signatures as of Friday morning.Credit:Netflix

On social media, people are calling Netflix's poster for the movie – which pictures its four pre-teen stars posing in costumes baring their legs and midriffs – "disgusting," "upsetting" and "sick". Netflix has apologised for its promotional materials but there are no plans to scrap the film, which is set to debut globally on September 9.

"We're deeply sorry for the inappropriate artwork that we used for Mignonnes/Cuties," Netflix said in a statement. "It was not OK, nor was it representative of this French film which won an award at Sundance. We've now updated the pictures and description."

The original plot summary for Cuties, preserved via screenshot in the petition, introduced 11-year-old Amy, "who becomes fascinated with a twerking dance crew" and "starts to explore her femininity". The Change.org campaign to delete the title had amassed more than 100,000 signatures as of Friday morning, and Netflix's apology did not go over well with those who believe altering the poster and synopsis is not enough.

In a recent interview with Cineuropa, director Maimouna Doucoure explained the inspiration for Cuties, which is based in part on her own childhood experiences, as well as those of girls growing up today.

"This isn't a health and safety ad," Doucoure told Cineuropa. "This is most of all an uncompromising portrait of an 11-year-old girl plunged in a world that imposes a series of dictates on her. It was very important not to judge these girls, but most of all to understand them, to listen to them, to give them a voice, to take into account the complexity of what they're living through in society, and all of that in parallel with their childhood which is always there, their imaginary, their innocence."