While Melbourne patiently suffocated under its masks, the NGV must have been clandestinely busy with a huge rehang to accommodate its Triennial. The challenge was not just whether they’d be able to bring in hundreds of works from abroad but where to put them in a building already crammed with a permanent collection.

Big commanding pieces fit in large changing spaces like the forecourt, where Quantum Memories by Refik Anadol (Turkey) heaves with computer-generated waves. Created with the help of artificial
intelligence, the illusion of a reflective liquid looks both real and odd, flowing like a feral cream of cauliflower soup. 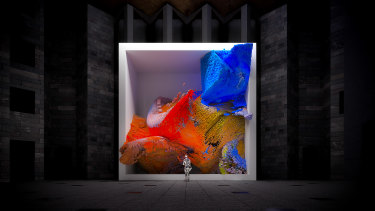 Some works demand their own space because they’re all about how we use space. Take the amusing installation by the consortium BTVV (Switzerland/Finland/USA). You walk into a city apartment with splendid views, fitted out in clinical white and posh appliances. But the scale is haywire. Everything is either huge or tiny, reflecting the way architecture is photo-manipulated for the real estate market.

As an antidote, you can de-stress in a beautiful pavilion created by Kengo Kuma & Associates (Japan) in collaboration with Geoffrey Nees (Australia), built in timber salvaged from the Botanic Gardens. Thousands of pieces splay over one another like the tiling of a leaf canopy. You wander through this tessellated arcade till it ends in a bower for observing an abstract painting by Lee Ufan (Korea/Japan).

The Triennial contemplates ecology – as well as race and gender – in thoughtful and critical ways. An example is how global culture has set terrible goals for us, symbolised in an installation by Diamond Stingily (USA) with racks of athletic trophies. The prizes that are all about winning contain consolations that are all about losing.

Some of the knock-out works don’t demand much space, like a crystalline ball by Stuart Haygarth (UK). Reminiscent of a chandelier, it hangs happily among the old masters and decorative arts. It takes you a moment to realise that the sphere is ingeniously made of thousands of suspended optical lenses from cast-off prescription spectacles, arranged in careful gradations. 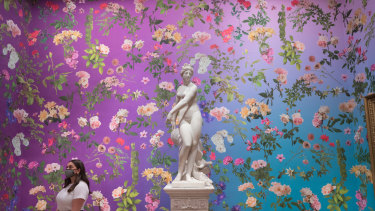 There are also works that take up their station in a vitrine or on a table as if they belong amid the period pieces of the collection. Indigenous artist Tony Albert recreates Aboriginal caricatures in glass, as if the NGV has momentarily acquired a racist Edwardian drawing room; and Richard Quinn (UK) creates an Elizabethan costume that combines the look of chainmail, punk and pearly Tudors, that could only survive in a museum case.

Other works make more demonstrative incursions on the permanent collection. They don’t just sit alongside the masters but uproot them from their timeline. Some rooms that normally contain renaissance and baroque works have been wallpapered by Fallen Fruit/David Allen Burns and Austin Young (USA) in luminous spectral progressions.

In a 19th century gallery, Cecilie Bendixen (Denmark) creates clouds to complement the meteorology in the pictures; and Faye Toogood (UK) creates three environments for the Dutch old masters to evoke daylight, candlelight and moonlight. The candlelight room really messes with the
spick-and-span interiors of Holland.

In sympathy with these interventions, the large salon hang of 19th century works has been electrified with rapid fire lighting, at various times picking out turbulent weather, animals or music. It reminds me of the projection works of the film-maker Peter Greenaway.

Most works have a recognisable point, like the fine architectural studies by Véronique Ellena showing majestic buildings in Rome but with homeless people sleeping in the portals. We spend so much time admiring the aesthetic achievements of European architecture but seldom worry about the Europeans who still have no roof.

Given that triennials are at least three years in the making, the inclusion of pandemic content is impressive. As well as masks by Alice Potts (UK) and Scotty So (Hong Kong/Australia) a work by Indigenous Australian Megan Cope shows the word Unprecedented in Gothic script but with the letters “precedent” picked out. For Indigenous people, small-pox and Spanish flu are bitterly remembered as the fruit of colonisation.

There’s a lot of scholarship behind the Triennial, which is represented in a five-volume catalogue. It’s fair to say that the gallery didn’t let coronavirus get in the way.

18/12/2020 Lifestyle Comments Off on NGV rises to the challenge with beautiful, thoughtful Triennial exhibition
Lifestyle