It sounds like the plot of a novel: an English actor, starring in a musical at Melbourne’s Princess Theatre, has a romance with a chorus girl in 1925. She falls pregnant; he returns to London. Almost a century later, their great-grandson – upon the very stage where they met – draws standing ovations and critical acclaim.

In reviews published 94 years apart, The Age praises the comic abilities of both men. 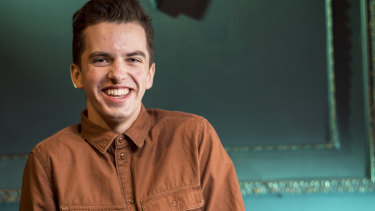 William McKenna is the youngest of four generations to perform at Melbourne’s Princess Theatre.Credit:Eddie Jim

On a sunny Friday morning, in the Wintergarden Bar of the Princess, McKenna takes a seat near the stained glass windows. His paternal great-grandparents are not his only familial link to this historic theatre; his mother, actor Michelle McKenna, and her mother, opera singer Gheda Fitzmaurice, have also performed here.

He pretends to be despotic stage dad, browbeating his future child. “You will be the fifth generation! You will perform at the Princess!”

Almost since he could talk, McKenna has impersonated those around him: his family at first – including his father Chris, also an actor, and sister Maddelin, now a filmmaker – then his classmates.

“He does a brilliant impression of me,” says Amanda Sykes, his drama and theatre studies teacher at Eltham College.

“He was always in my office, especially in Year 11 and 12, hungry to know how he could improve. He describes himself as an old man in a teenager’s body – he has a real respect for older people and their wisdom – but he’s also full of youthful openness and vitality.”

In Cursed Child, Scorpius becomes friends with Harry Potter’s boy Albus in their first year at Hogwarts. He has the quick wit of his father Draco, but none of his slick confidence. He'll compliment a fellow student with inadvertent zeal, for instance, then backtrack in a flurry of awkward self-deprecation.

Even in this otherworldly realm, feigned indifference is still the height of teenage cool.

“If a joke doesn’t land, Scorpius is acutely aware of it,” McKenna says. “A lot of people relate to that, including me.” 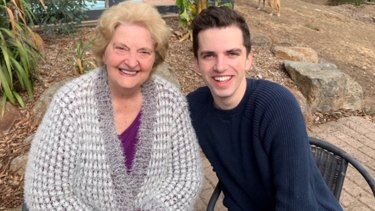 When he was in Year 7, a teacher requested volunteers for the school’s musical. McKenna shot his hand into the air, then retracted it in crimson-faced humiliation when he saw that no one else had.

He soon found his tribe: a group of students who threw themselves into the school’s esteemed performing arts program.

At 14, he entered Class Clowns, a nationwide contest run by the Melbourne International Comedy Festival. In his act, he pretended Gheda was hopelessly incontinent – then pointed her out in the audience.

Not every grandparent would take kindly to such ribbing.

"But as a performer, she was just happy the joke got a laugh,” McKenna says. "She was thrilled that I won."

He doubts he’ll return to stand-up (“you show people your best material and if they don’t laugh, it’s brutal”) but his mother, Michelle, believes his comic training has sharpened his dramatic abilities.

“He used to practice jokes in his little joke book and then try them out on us,” she says. 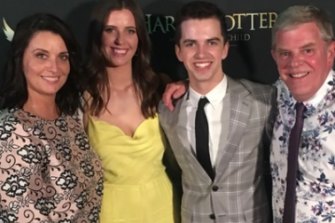 The McKenna family at the premiere of Harry Potter and the Cursed Child: Michelle, Maddelin, William and Chris.Credit:Michelle McKenna

“He always loved performing. When he was asked to be the captain of his primary school, he chose to be choir captain instead because it was more fun.”

He warned his parents to expect an ATAR score below 70. He got 95.

“We’re more proud of the boy he’s become than anything else,” says Chris, who runs a touring theatre company.

“He’s always been very sensitive and aware of other people’s feelings – and you can see that on stage.”

Harry Potter and the Cursed Child is playing at the Princess Theatre. New tickets go on sale Tuesday at www.harrypottertheplay.com/au/.

03/05/2019 Lifestyle Comments Off on On the very stage where his great-grandparents met, a star is born
Lifestyle