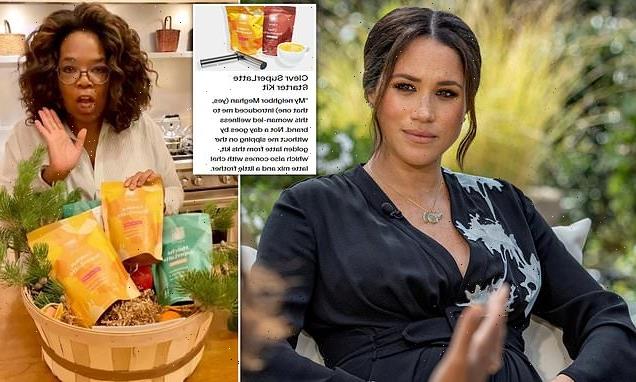 Billionaire TV mogul Oprah Winfrey has given her friend Meghan Markle’s woke coffee brand another leg-up after featuring the superfood latte company in the latest edition of her Favorite Things gift guide.

The TV host included products from instant oat milk latte brand Clevr Blends in this year’s version of her Christmas guide, in which she gushed over the ‘woman-led’ brand – which she was introduced to by her ‘neighbor Meghan’, who invested an unspecified amount in the company last year.

Meghan, 40, announced in December 2020 that she was backing the California-based ‘wellness brand’ – and quickly made a move to promote its products via her friend Oprah by sending her a gift basket filled with the company’s superfood brands.

Oprah happily shared the products on her Instagram account, which had more than 19 million subscribers at the time, in a post that was estimated to be worth a staggering $1 million in free publicity.

Now Oprah, 67, has offered Meghan’s coffee company yet another promotion by including its instant lattes in her list of Favorite Things from 2021.

‘My neighbor Meghan (yes, that one) introduced me to this woman-led wellness brand,’ she said in the list. 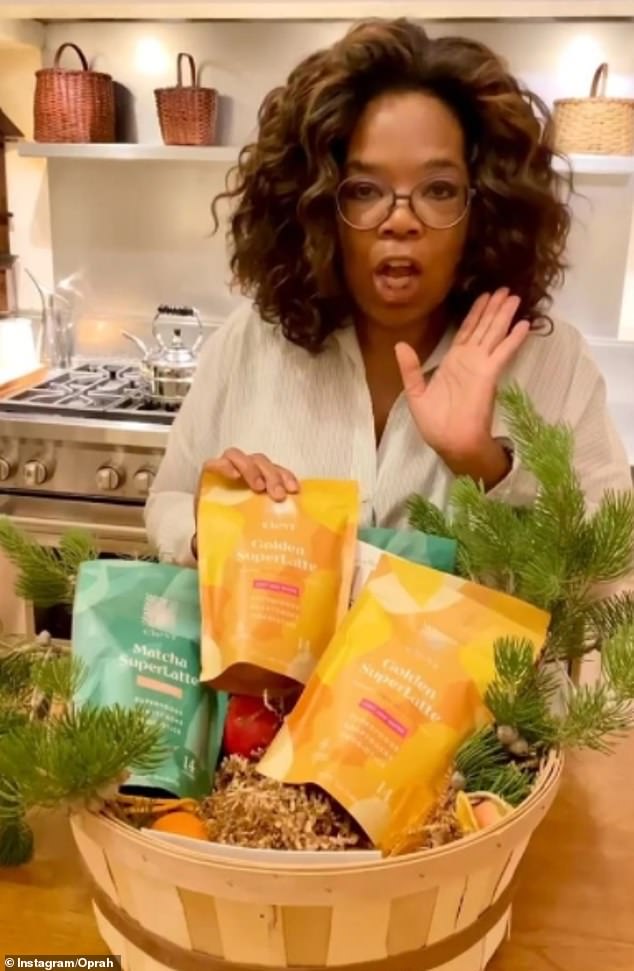 Promotion: Oprah Winfrey has once again touted her ‘neighbor’ Meghan Markle’s ‘ethical’ coffee brand by including it in her Favorite Things gift guide 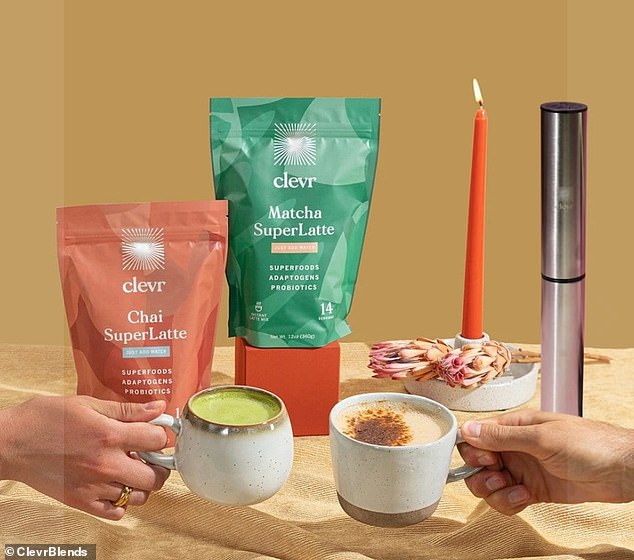 Helping hand: The inclusion comes 11 months after Oprah, 67, promoted the brand’s products on her Instagram page, where she had more than 19 million followers at the time

‘Not a day goes by without me sipping on the golden latte from this kit, which also comes with chai latte mix and a little frother.

‘You can add the mixes to smoothies for a flavor boost, too.’

The listing on Oprah’s website also included a link to the Clevr Blends website, where customers can purchase the brand’s $74 SuperLatte Starter Kit at a discount of 20 per cent if they use the code ‘Oprah’.

Gushing: In her 2021 gift guide, Oprah claimed that she drinks Clevr Blends’ lattes daily – and she included a link and discount code for customers to buy the brand’s $74 SuperLatte Starter Kit

When Meghan first got involved with the product last year, she sent a gift box full the vegan coffee to Oprah, who shared a video of herself unboxing it to her Instagram account.

The post was reportedly worth at least $1 million and experts told MailOnline at the time that it was likely the most valuable piece of free publicity in history.

‘On the first day of Christmas my neighbor “M” sent to me… A basket of deliciousness! (Yes that M). My new drink of choice for the morning and night. Wish I had @clevrblends sooner ’cause I would’ve added it to my Favorite Things list. #HappyHolidays,’ she wrote in the post.

It’s unclear how much money Meghan invested in the company.

It was her first investment after she and her husband, Prince Harry, stepped back from their royal duties and moved to Los Angeles to pursue a private life and seek ‘financial independence.’

‘This investment is in support of a passionate female entrepreneur who prioritizes building community alongside her business,’ said Meghan of the brand’s founder and CEO, Hannah Mendoza.

‘I’m proud to invest in Hannah’s commitment to sourcing ethical ingredients and creating a product that I personally love and has a holistic approach to wellness.

The startup business sells latte powders in matcha, chai and coffee flavors, which are made into a drink by adding hot or cold water.

In a statement, Hannah said, ‘Entrepreneurs need funding, but they also need advisers who care deeply about what they are building.

‘I’m grateful to have found both in the Duchess of Sussex.

Jasmine Birtles, Founder of MoneyMagpie.com told FEMAIL that no matter the amount Meghan’s investment in the company her involvement will be worth millions in free publicity.

She added that she wouldn’t be surprised if Meghan got a good deal from the company because of her star-power.

‘A lot of celebrities have invested very successfully in start-ups, Ashton Kutcher has done some really amazing investments. He was an early investor in Skype, AirBnB and Uber. There are some actors who have done very nicely, and others who have lost their shirt, Paris Hilton invested in some cryptocurrency, and lost money. There are lots of these start ups that happen, some do amazingly well and some just drop like a stone very quickly

‘Investing in start ups is a very risky proposition for celebs or ordinary people, it’s something you should be very cautious about, only put in money you can afford to lose.

‘What often does happen is neighbours, friends, family members decide to set up a business and people think it’s going to be great.

‘People can get in at the ground level and I’ve done that, and lost money doing it. I think when it’s friend or family you need to be extra cautious and your natural inclination is to help – but you need to be extra sure it’s got legs, and do extra due diligence. It can cause a lot of bad feeling if something goes wrong – just need to be careful. Having said that, if you’d put £100 in Google as a start-up you’d be a millionaire now.

‘I definitely I suspect that, if Meghan’s got any sense she would have put it to them to get herself a good deal. Given the publicity that she’ll give them, it wouldn’t surprise me if she said I’d like it at half price, i would assume she’d struck a good deal, given her global recognition and PR.

‘Investing in start ups is a really good thing to do, but I wold say it’s good to invest in more more solid things first, pensions, blue chip and stocks and shares and then have a bit of a punt in starts up. I think even if you’re in your twenties it’s a good time to start.

‘Meghan is nearly 40, so I would hope she’s already got some other investments by now too.’

‘Her passion for what we’re creating is palpable, and I couldn’t imagine a more aligned partnership. We’re excited for the road ahead.’

However, despite marketing itself as an ethical brand, Clevr Blends sparked controversy earlier this year when The Mail on Sunday revealed that the company had imported a large amount of its ingredients from a Chinese supplier that is based in a brutal police state.

Human rights groups had urged Western companies to cut all business ties with China’s Xinjiang region because of appalling abuses, including the widespread use of forced labor and the detention of a million Uighur Muslims in re-education camps, where it is claimed women are systematically raped.

Despite this, it was revealed in April that Clevr Blends had received almost 19 tons of oat milk powder from a company based in Urumqi, the capital of Xinjiang, before switching to a US-based supplier several months ago.

The supplier – Xinjiang Haiyan International Trade – had its head office within four miles of four suspected detention centers, including a possible maximum security prison, and an alleged re-education site.

However, there is no evidence to suggest that Xinjiang Haiyan has used forced labor and The Mail on Sunday reported that the oats received by Clevr Blends were neither grown nor processed in Xinjiang.

Still, the US Department of State issued an updated warning to American businesses about ‘supply chain and investment links’ in the region in July of this year, urging all companies to end any existing relations with suppliers in the area.

‘Given the severity and extent of these abuses, including widespread, state-sponsored forced labor and intrusive surveillance taking place amid ongoing genocide and crimes against humanity in Xinjiang, businesses and individuals that do not exit supply chains, ventures, and/or investments connected to Xinjiang could run a high risk of violating U.S. law,’ the warning states.

Oprah did not address the controversy surrounding Clevr Blends’ connection to the Xinjiang province, however the news has certainly not stopped her from continuing to tout the brand’s products.

The TV mogul has been friends with Meghan for several years now and was a guest at the Duke and Duchess of Sussexes’ wedding in May 2018, however their relationship appears to have grown even stronger after Meghan and Harry moved into a $14 million Montecito mansion last year, which is located just a stone’s throw from Oprah’s own sprawling home.

Then, in March of this year, she sat down with Meghan and Harry for a bombshell interview that aired on primetime TV, in which the couple aired a series of very damaging allegations about the royal family – including accusations that someone inside The Firm made racist remarks about their son Archie’s skin tone before his birth.