Overlooked is a series of obituaries about remarkable people whose deaths, beginning in 1851, went unreported in The Times.

The alarm went off at 2:15 a.m. Grace Banker stirred awake and roused three of the women she was bunking with. Groggily, they shared a quick breakfast by candlelight, then reported to their posts. As Signal Corps operators, they were responsible for decoding and transmitting messages through the telephone switchboards used on the front lines by the United States Army during World War I.

It was mid-September in 1918, and the battle for the St. Mihiel salient, the war’s first large campaign led by the Americans, had started. Under the command of Gen. John J. Pershing, the American Expeditionary Forces and more than 100,000 French troops had set out to take back the salient, a strategic outpost occupied by the Germans.

Over the next few days, cannons boomed in the distance as Banker and the five women under her command at the switchboards connected calls around the clock, their gas masks and helmets slung over their chairs.

Though they were within German artillery range, the gravity of the task kept them going. “Never spent more time at the office and never enjoyed anything more,” Banker wrote in her diary, as quoted in Elizabeth Cobbs’s 2017 book, “The Hello Girls,” the title taken from the term by which the switchboard operators came to be known. “My girls work like beavers.”

The switchboard operators, made up mostly of women, handled messages in English and French. Communication between the military command, supply depots and even the trenches rested in their hands.

Some 7,000 American women volunteered to be part of the Corps; about 450 were selected to be switchboard operators. Banker was the chief operator of the first group, of 32 women, to be sent to France.

“These women were in positions of extreme trust, because every command to fire or cease-fire or advance or retreat in World War I was made by telephone,” Cobbs said in an interview. “And that telephone call was connected by a woman who could hear every word.”

The job was fast-paced and exhausting. The Signal Corps often connected 150,000 calls a day, and the coded language they used to mask critical details about the Army’s positions and personnel changed frequently to deter the enemy. For example, Toul, the French city where the Army was based, could be identified by the code “Podunk” one day and “Wabash” the next.

“Once in a mad rush of work I heard one of the girls say desperately, ‘Can’t I get Uncle?’ and another, ‘No, I didn’t get ‘Jam.’ It all sounded like the Mad Hatter,” Banker wrote in an article for Yankee Magazine in 1974.

For security reasons the codes couldn’t be written down; the Signal Corps operators had to memorize them each time they changed. The switchboard messages between Army officials often dealt with top-secret information, like battle orders, artillery commands and emergency calls from the trenches.

By the end of the battle of St. Mihiel, more than 4,500 American soldiers had died and 2,500 more were injured, but the gains were pivotal: Allied forces pushed the Germans out of territory that had been occupied for four years.

Grace Derby Banker was born in Passaic, N.J., on Oct. 25, 1892, to William and Edith (Armstrong) Banker. Her father was an accountant. At a time when public education wasn’t widely available, Grace managed to finish secondary school and graduate from Barnard College in New York with a double major in French and history.

Banker began working as a telephone operator for the American Telephone and Telegraph Company at their headquarters in New York. She rose in the company quickly, becoming the rare woman to work as an instructor in AT&T’s long-distance division.

One Sunday in December 1917, Banker was reading The New York Post when she came across an Army advertisement seeking women who could speak French and English to operate switchboards, which was relatively new technology at the time.

Male recruits had proved largely inexpert in the work, Cobbs said. It took a man an average of 60 seconds to connect a call, while it took a woman only 10. The difference could mean winning or losing a battle.

Banker wrote in and volunteered. “My grandmother and, I think, many women at that time wanted to do their part,” Carolyn Timbie, Banker’s granddaughter, said in a telephone interview. “To be a part of the war. To help win.”

The operators underwent months of training and were then given dog tags and uniforms that for the sake of modestly included skirts and bloomers.

“Sailed this morning in a dismal gray drizzle,” Banker wrote in her diary on March 7, 1918. “Watched the Statue of Liberty fade from sight. For the first time, suddenly realized what a responsibility I have on my young shoulders.” 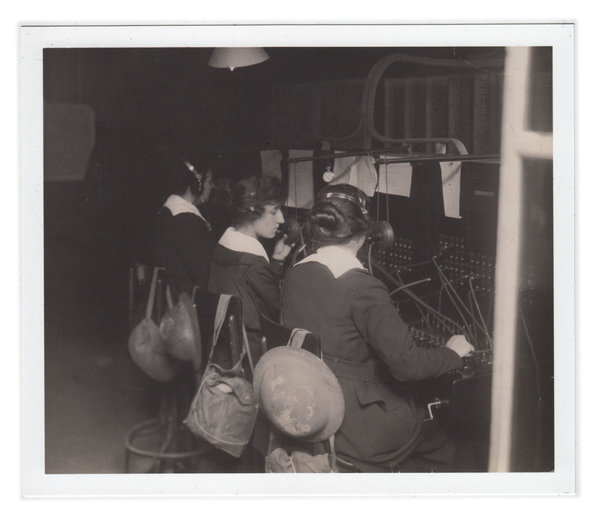 When foggy conditions forced the ship to dock temporarily along the French coast, soldiers on patrol there mistook it for an enemy vessel, surrounded it and prepared to attack before recognizing their mistake.

While overseas Banker received news that her father had died.

After the war, she was awarded the Distinguished Service Medal, the Army’s highest honor, on May 10, 1919.

But despite the honor, the Army did not consider her or her fellow Signal Corps operators to be veterans, a designation that came with monetary benefits. Instead, they were considered civilian contract employees.

Banker was largely silent on the issue, but some Signal Corps women took up the cause, petitioning Congress for decades to give them veteran status. It was finally granted in November 1977 by President Jimmy Carter despite opposition from the Veterans Administration and the American Legion. By then, only 18 of the women survived. Banker was not among them.

The Signal Corps has received renewed attention in recent years, in addition to Cobbs’ book. Last year, a documentary film, also called “The Hello Girls,” was released and an Off Broadway musical of the same name was staged. The book “Girls on the Line,” a fictionalized account of the women’s story by Aimie K. Runyan, was published in November.

Despite never receiving recognition from the Army in her lifetime, it was clear from her diary that Banker had relished serving in the war.

“If you were to ask every girl in my party about her hardships, I know she would answer that she had none worth mentioning,” she wrote, “and that her work overseas helped her in every way and made her a bigger person than she was before.”

15/05/2019 Lifestyle Comments Off on Overlooked No More: Grace Banker, Whose ‘Hello Girls’ Decoded Calls in World War I
Lifestyle