While many dismiss pop music as superficial fluff, for Powerhouse Youth Theatre Fairfield artistic director Karen Therese, it is the perfect outlet for reflecting on deeper topics such as identity, womanhood and culture.

“When you politicise artists like Courtney Love and Rihanna, you get into some really profound conversations about visibility of women and intersectional feminism,” says Therese.

“You can dissect what's happened to so many female artists over the generations of pop culture and realise a lot of them have been pushed back or demonised or were not given nowhere near the same presence in our culture as male artists.” 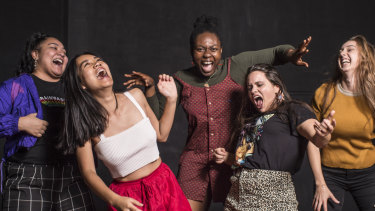 These ideas come together in Playlist, a dance-theatre show by the western Sydney youth theatre company that is described as "Beyonce meets the women’s marches, meets Australian Idol". After its successful debut in Fairfield in August last year, the show is getting a second season on a much bigger stage – the Sydney Opera House – as part of Festival UnWrapped.

To create Playlist, the five women and Therese worked over nine weeks, discussing their lives and society at large. Those deeply honest and vulnerable conversations were then woven into the piece with choreography from Larissa McGowan.

“One of the first times we met was just after the #MeToo stories were breaking and I remember crying in that rehearsal room talking about past experiences we had as young women,” says Tran.

“There is a lot of joy in the show, we celebrate our femininity, we celebrate being together to create art, but there is anger at the political climate. There is a sadness that things haven't advanced as much as we'd like.”

It is not all serious, however. Uba says at its core the work is “a riot told through some feisty women who have very different ideas of what feminism is to them personally”.

She says the strength of the piece is in the authenticity created when people tell their own stories, as opposed to being mouthpieces for the words of another. “When someone tells someone else's story, the story itself can be twisted,” she says.

“When you give someone a platform to tell their own stories, you will see that there's more power, more passion.”

Therese feels a deep pride that Powerhouse Youth Theatre is providing such a successful outlet in sharing the perspectives of young western Sydney creatives.

“We're transforming Australian culture by creating these amazing works and putting diverse artists on the Australian stage. I feel like we are producing the new breed that will be the future. It's exciting.”

Playlist is at Sydney Opera House for Festival UnWrapped from May 16-19.