Justin Madden won’t name names, but a handful of former AFL players have approached him when considering following his lead and entering politics after hanging up the boots.

The 332-gamer and dual premiership ruckman was grateful for his opportunity to run as a Labor candidate in the 1999 Victorian election, but he wouldn’t recommend others do so without being prepared. 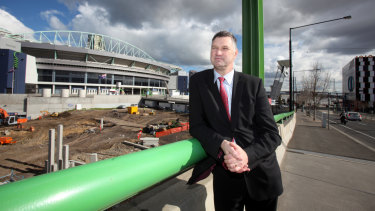 “I think you’ve got to have a yearning for it, in some sense [I’d recommend it]. And you’ve also got to do some legwork to get there in one shape or form. If you went in as a complete novice you could easily get steamrolled in the process,” Madden said this week.

There are a handful of former professional sportspeople running in next weekend’s federal election including Winter Olympic bronze medallist Zali Steggall, who is looking to unseat former prime minister Tony Abbott in the Sydney seat of Warringah.

Though there are plenty of ex-politicians heavily involved in football, notably former Victorian premier and now Hawthorn president Jeff Kennett, and former federal finance minister Lindsay Tanner, these days the chairman of Essendon, there aren’t too many former top footballers who have headed the other way in recent years, although Doug Hawkins did run for Clive Palmer’s party in 2013.

A member of the Victorian upper house between 2002 and 2016, former Fremantle coach Damian Drum moved into federal politics ahead of the 2016 election, winning the safe National seat of Murray in Northern Victoria. Drum is running again this year, in the renamed seat of Nicholls. 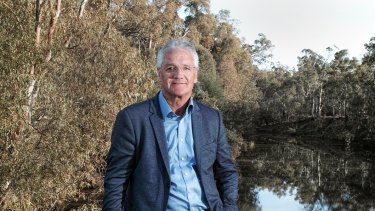 Damian Drum is running in the federal seat of Nicholls.Credit:Simon Greig

Drum was approached about a political career while coaching with Bendigo in the VFL early last decade. He’d been interested in politics after becoming disenchanted with Labor during the high interest rate period of the late 1980s when he’d been running a garage and shed business.

He says that some of the skills are transferable, but suggests footballers receive more guidance.

“There’s an awful amount of professional education and professional development put into our footballers to make them better. Whereas that environment doesn’t seem to happen in politics. You are more or less in there to find your own way through the maze. It’s why the National Party have always been good, because they are a smaller party, and they are quite collegiate,” Drum said.

He is keen to see more players consider politics as a post-footy option.

“I would love to talk to anybody that it is interested,” Drum said. 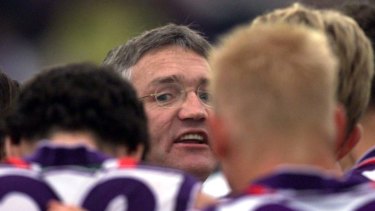 “Many of our superstars like to think that there is simply media work that is waiting for them at the end of their career, that will be pretty cushy. This particular role is far from being cushy. It’s tough, horrible hours, incredible scrutiny.

Madden had built Labor connections during his time at the helm of the AFL Players Association. He’d been approached by Labor powerbroker Marsha Thomson at short notice about making a run for the Victorian upper house. 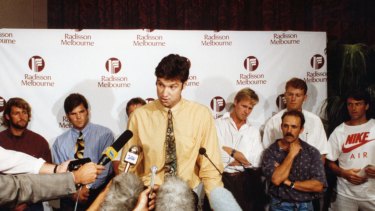 Justin Madden and other members of the AFL Players Association at a press conference in Melbourne in January 1993.
Credit:Joe Sabljak

“We had that chat, I think it was 10 o’clock in the morning on Puckle Street. And I said, 'When do you need an answer by? And she said, ‘By three o’clock this afternoon!’” Madden recalls.

By the turn of the century he was a minister, with Labor prevailing in an upset win on the day Madden two former clubs contested a famous preliminary final.

Like Drum, Madden sees parallels between the two fields.

“You know who the opposition are, but you’ve also got to fight for survival within your own team, because everyone else would like a similar position,” said Madden, who wound up his political career ahead of the 2014 state election.

“Disunity is death. Whether it’s football, or whether it’s politics," he said.

“I was very fortunate in that I was supported to go in quickly and you just get in there. But if you’ve got to go through a whole pre-selection process, it can be more time consuming, and that makes it very difficult. I was very fortunate on a number of fronts.”

10/05/2019 Lifestyle Comments Off on Political footballers: Life in a new ball game
Lifestyle