Prime Minister Scott Morrison has just overseen Christian Porter’s assuming of the role of Acting leader of the House of Representatives. Amid a burgeoning, pre-eminent mass awakening to the endemic issue of sexual abuse, this decision marks a proverbial slap in the face of our entire nation.

Less than two years ago, the twice-convicted paedophile who abused me and others before me was awarded a doctorate by the University of Tasmania, despite breaking the student code of conduct and being charged and jailed a second time for producing child exploitation material during his PhD tenure. 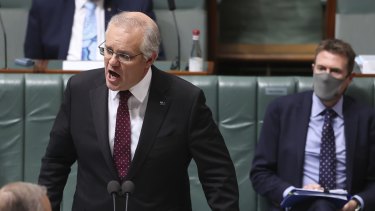 In light of my own experience, it’s hard to process how an accused rapist – albeit one who will never face prosecution – could be offered one of the highest positions of power in the country by none other than our nation’s leader himself.

Christian Porter has been accused of raping a woman in 1988. Last year, his alleged victim suicided. He has denied the accusation.

But it isn’t just Porter’s character that’s in question here, it’s the morality of our current leadership.

Outside of Parliament, positions of public trust are governed by codes of conduct that stipulate one must be a “fit and proper” person in order to occupy them, such as in the case of doctors who are bound by the Hippocratic oath. Furthermore, their adequacy – in terms of both knowledge and ethics – is repeatedly challenged and updated through mandated continuing professional development. 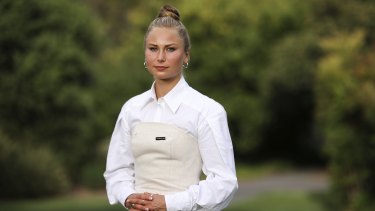 Australian of the Year Grace Tame says Porter’s elevation is a slap in the face for survivors of sexual abuse.Credit:Alex Ellinghausen

In Parliament, however, no such requirements exist. It is the Prime Minister who sets the standards and maintains them by appointing cabinet ministers at his or her discretion.

Given the seriousness of the allegations against Porter, the bare minimum test of his fitness to hold ministerial office would be an independent inquiry. How damning it is that the government refused to allow for one.

If the Prime Minister’s recent rhetoric about wanting to support assault survivors and protect women’s safety was indeed true, he would surely go to any lengths possible to ensure there was not an accused rapist amongst his own staff. Clearly, it has been nothing but lip service. His actions speak volumes that drown out his every word.

And now, not only has Porter been permitted to remain in office, he’s been temporarily elevated. His are circumstances steeped in the protective privileges of a patriarchal Parliament.

There is no way this decision was accidental. It is a transparently deliberate, definitive statement that reeks of abuse of power and a blatant disregard of the people.

Last week I had what I thought was a productive meeting with the federal government, and now this has happened.

Sexual abuse is an issue of human rights and should therefore transcend all divides; political and otherwise. And yet, by his actions our Prime Minister has proven he is of a different mind. He is determined to associate his party with outmoded, oppressive cultures and attitudes.

I’m not party-political, but I call out injustice where I see it, and in this instance, it is damn-near blinding.

Typically, one of the things the leader of the House does is shut down debate. The role is embedded with the power to enforce silence; the power to suppress truth. How powerfully ironic.

Demonstrative actions at the apex of influence – such as the elevation of Porter –have a dangerously permissive effect on future corruption whilst simultaneously stifling progress. They send an intimidating message of chilling apathy.

In particular, this appointment is an insult to all survivors, and indeed the whole country. It reinforces the idea that accused predators are too often protected, feeding into the already crippling fear of victims and bystanders. It is an act of emboldening perpetrators.

My heart breaks at the thought of survivors still living in silence, looking to our leaders for hope.

Grace Tame is a survivor of child sexual abuse and the 2021 Australian Of The Year.