From the moment it was clear the pandemic was going to infiltrate Australia, and lockdowns were proposed, schools have been a vexed issue. Victoria moved quickly, shutting schools early despite Prime Minister Scott Morrison and Chief Medical Officer Brendan Murphy strongly advising they were safe and should remain open. Premier Daniel Andrews made the right call.

Once the curve was initially flattened, pressure from Canberra to allow students to return to face-to-face teaching soon grew. But Mr Andrews continued his cautious approach, with Victoria being the last state to fully reopen school doors to all students. Again, it was the right call. 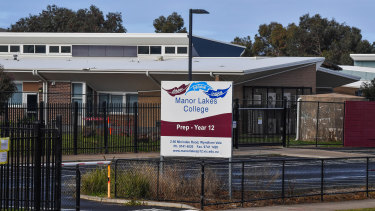 Manor Lakes P-12 College was shut down after a senior student tested positive to COVID-19.Credit:Joe Armao

Victoria's second surge of infections put an end to that. On the first day of the winter school holidays, on June 27, there were 41 positive infections recorded in Victoria. By the end of the two-week break that number had rocketed to 273, it was rising. When the stage three lockdown was reinstated in metropolitan Melbourne and Mitchell Shire, the decision on schools was put on hold.

With the hope that the new lockdown would stem the number of infections, it was a sensible solution that gave VCE students the best chance to continue their studies in the best environment, which is in the classroom, with the least disruption. And with schools in regional Victoria fully open, it also put all VCE students on a level playing field.

But that is no longer the case. As the number of positive infections has continued to rise, the impact on schools has become highly disruptive. At one point this week, more than 80 schools were closed after being linked with recent positive cases.

And far from it being a temporary shutdown while cleaning and contact tracing are carried out, some schools are having to close for extended delays. Al Siraat College, in Epping, shut for more than two weeks after recording a single positive infection in its community. The school's principal, Fazeel Arain, said this week the lack of information from the Department of Health and Human Services had exacerbated anxiety within the school. "We didn’t hear from them for 10 days," he said.

The principals’ union backed these concerns, saying the Health Department had been "staggeringly poor" at managing positive cases in schools. Australian Principals Federation president Julie Podbury said it was time for all students to go back to remote learning. She also called for the Department of Health to be stripped of responsibility for communicating with schools, instead backing the Education Department to carry out these duties.

This criticism cannot be easily ignored. For schools to operate effectively, principals must have absolute confidence that they have the support and backing of government.

But Mr Andrews is having none of it. He is adamant that schools are "very low risk" and need to stay open. He is also dismissive of attacks on the Health Department. "I don’t think that’s a fair criticism. I think everyone’s doing their best," h said.

Under the huge strain of a pandemic, the Health Department probably is doing its best. But, in this instance, its best is not good enough. The pressure on VCE students is enormous during the best of times. It's time they were given full recognition of the extra burden they are carrying, and clearer direction on what lies ahead. A return to remote learning would be a start, and some innovative thinking would be welcome on how to ensure students who want to enter university are not thwarted by the chaos of this year.