A PrettyLittleThing shopper was left disappointed after a dress she ordered was so small it could barely fit over her head.

April Bolger, 23, from Manchester, shared photos of herself trying to squeeze into the £20 Broderie Anglaise Smock Dress before getting herself ‘stuck’ in the frock when she tried to take it off.

Taking to Twitter, the marketing manager questioned whether the dress was designed for adults.

April Bolger, 23, from Manchester,  ordered the £20 Broderie Anglaise Smock Dress (left) from PrettyLittleThing but found it so small she got herself ‘stuck’ in the frock (right) 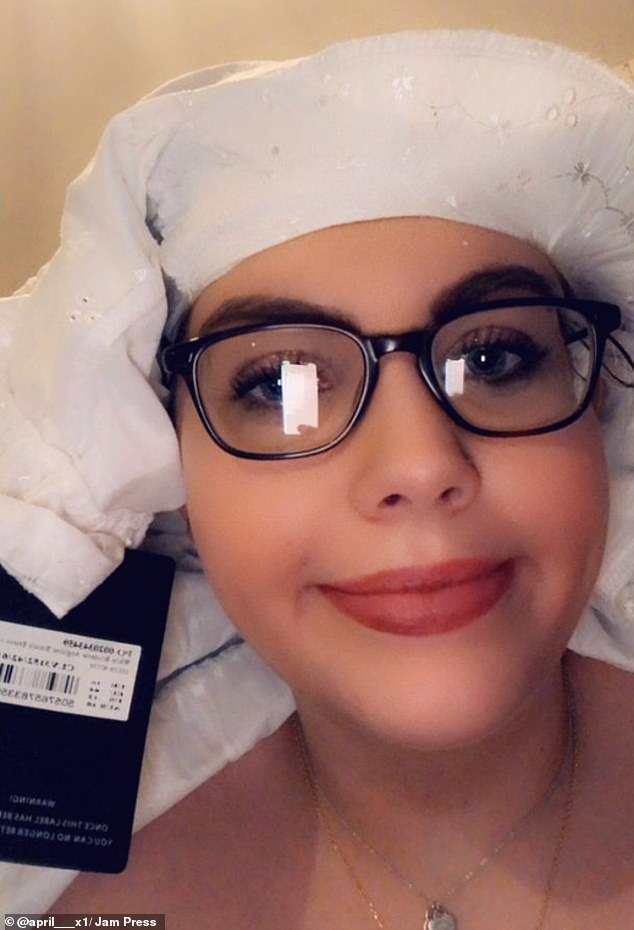 The 23-year-old marketing manager shared a snap of the dress worn as a ‘hat’ as she struggled to pull it off and over her head. She shared her hilarious ordeal on Twitter

She also shared snaps that showed the dress was so short it could only be worn as a top with shorts.

The hilarious social media thread started when April posted a photo of the white dress laid out on the floor with the caption: ‘In what world is an adult sized head meant to fit through that head hole?’

She tagged the retailer in a bid to get its attention. 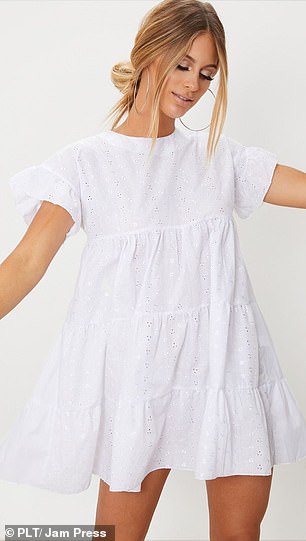 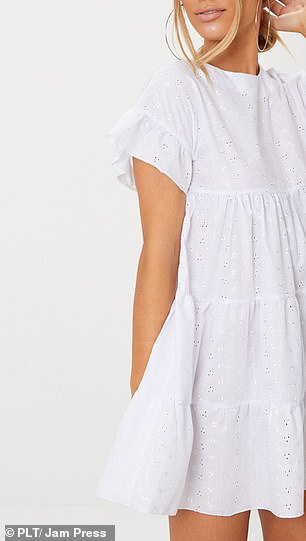 Photos on the PrettyLittleThing website show the feminine, floaty dreass draped on a model 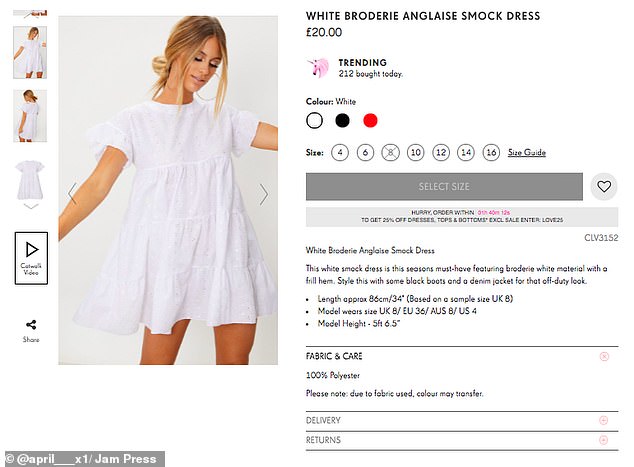 Updating followers, she shared a photo of her standing in the frock. April added: ‘Finally got my head in, I’m now stuck in the dress.’

The shopper finally forced her way out of the dress and added a third photo, writing: ‘Arms are out, but head is still stuck.’

She added a final photo in response to her friends’ comments on the thread, revealing she had ‘finally made it to hat level’. 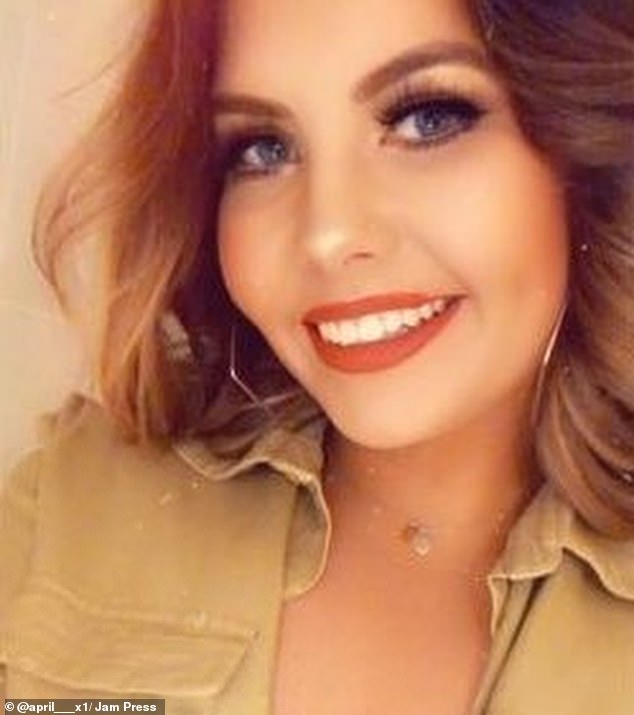 April, pictured, questioned whether the dress was made for adults, saying it was like a child’s 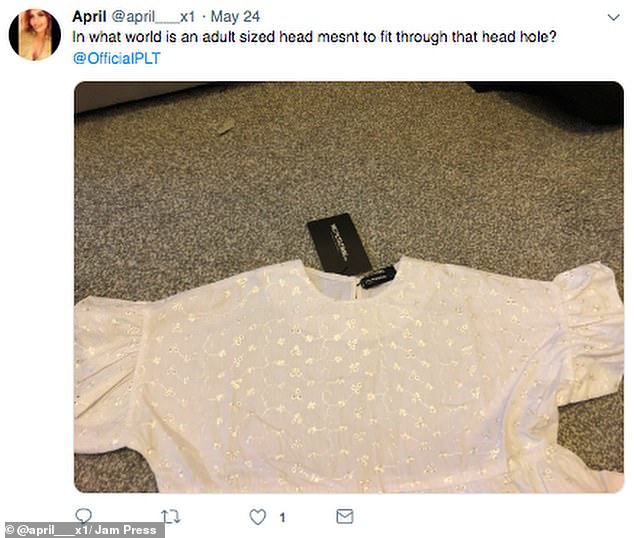 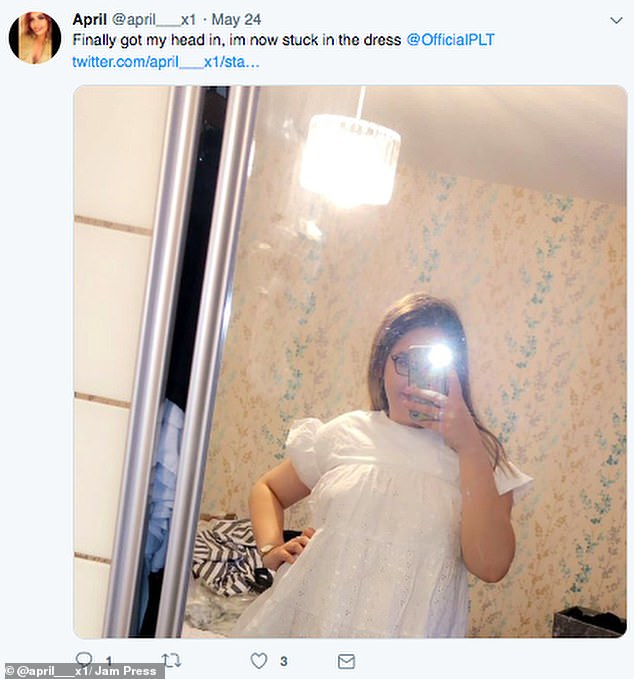 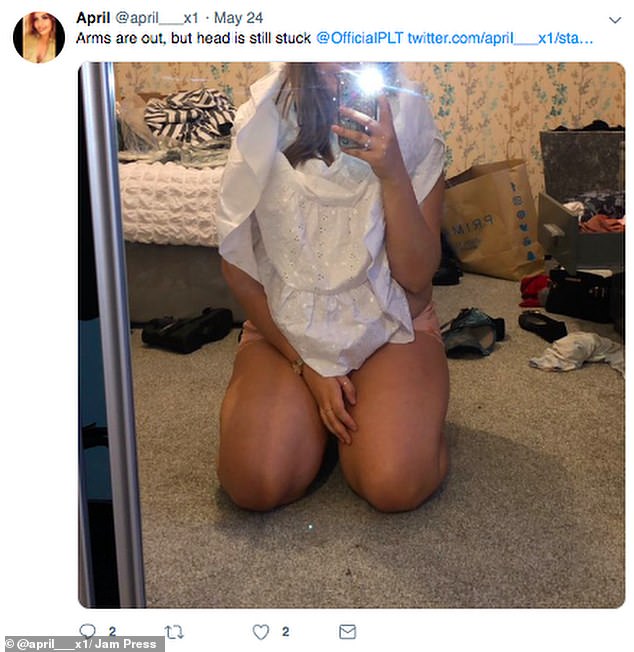 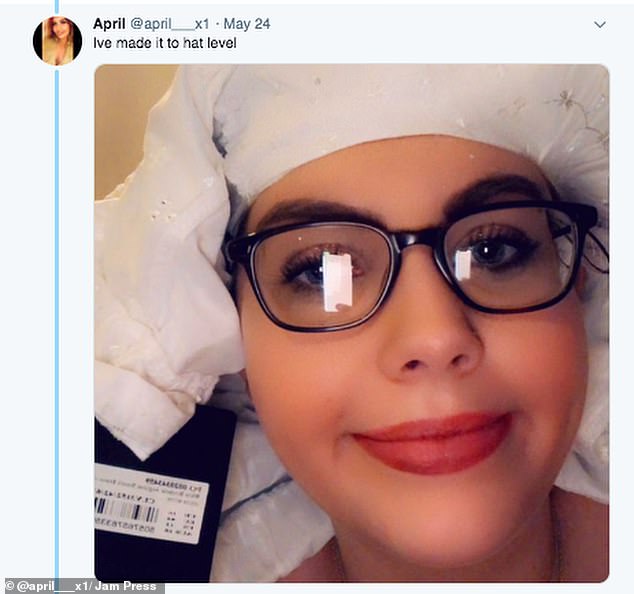 The shopper updated followers as she tried to get the dress on, before finding herself stuck in the frock. Her final photo was to show that the dress finally made it to ‘hat level’

The retailer, which has faced a string of complaints over ill-fitting garments in recent months, swiftly contacted April and asked for her order number to resolve the matter.

However April decided to return the dress and is currently waiting for a refund.

Despite being left disappointed by the ‘childlike’ sizing of the dress, April said she could continue to order from PrettyLittleThing.