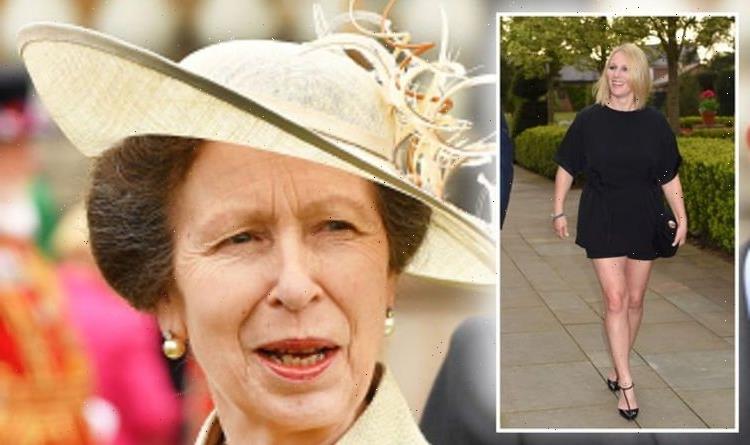 Princess Anne, 71, married her first husband, Captain Mark Phillips, 73, in 1973 in Westminster Abbey. They welcomed their first child Peter Phillips, 44, in 1977, followed by their daughter Zara Phillips, 40, in 1981. But what kind of mother is the Princess Royal?

Both Peter and Zara were raised without royal titles as they are the grandchildren of the monarch through the female line.

Tradition dictated that only the father could pass on his royal title, hence why Prince Andrew’s children are both Princesses but Anne’s children are not.

Judi James, a body language expert, spoke exclusively to Express.co.uk on the relationships between Princess Anne and her most high-profile child, Zara Tindall.

Zara is married rugby star Mike Tindall in 2011 after dating since 2003.

Although Zara was raised without a title, her involvement in the 2012 Olympics and subsequently winning a silver medal has earned her a high-ranking profile in the Royal Family.

Judi said: “This is one of the closest and most functional parent/child relationships in the Royal Family, with signals of mutual respect and empathy.

“There are obviously many loving parental blends among the royals but with Anne and Zara there seems to be a meeting of minds at every level.

“If you took the weight of the air of royal formality out of Anne’s body language what you would have left would probably look very much like Zara.

“Anne appears to have given her daughter the freedom she missed out on as a top-tier and very dutiful royal.

“But Zara seems to have paid her mother back by leading the kind of life Anne might have wanted for herself.

“Anne’s gift of freedom has never appeared to have been wasted on Zara.

“This probably accounts for some of their friendship signals together now,” she said.

Judi expanded on Anne and Zara’s “friendship” and how this is really “expressive” to the British public.

She continued: “Zara’s body language is unrelentingly upbeat and spontaneous and she seems to be openly happy and openly emotional whenever we see her in public.

“She is tactile and expressive and it is notable that she appears to bring out those qualities in her mother when they are together.

“Anne has often looked dour and rather haughty in the past.

“But with Zara there are clear links of shared humour and a sense of fun,” the expert noted.

Judi added: “The two women also share high levels of success outside the Royal Family, giving both of them what must feel like a certain amount of confidence that they have earned their place in the public eye and the public’s respect.

“Both have had amazingly successful careers as Olympic-level riders.

“This shared love of horses plus the shared respect for the discipline involved has thrown up many signals of professional as well as parental respect.”