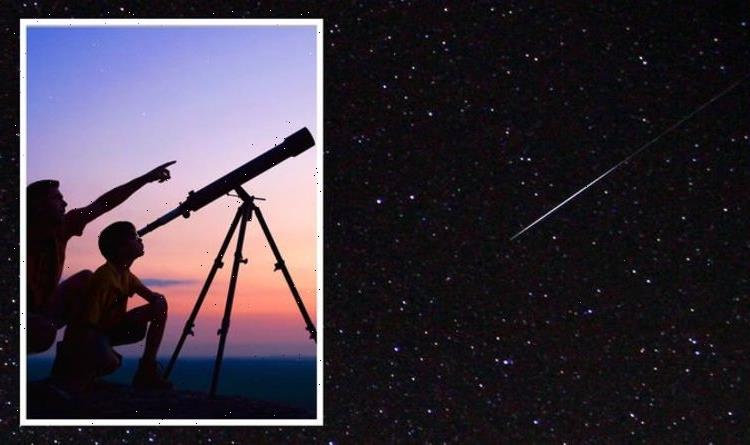 The Quadrantids meteor shower will be lighting up the night sky tonight, as hundreds of blue meteors will be visible from parts of the Northern Hemisphere. Spotting meteors can be tricky and requires a lot of patience. These are our top tips to catch a glimpse of the celestial display from the UK tonight.

Taking place over two weeks from December 28 to January 12, the Quadrantid meteor shower will peak between January 3 and 4.

The Quadrantids meteor shower will be visible from the UK tonight.

This spectacular shower can reach a peak of up to 120 meteors per hour.

How can I watch the Quadrantids meteor shower?

The shower is thought to begin to peak just before 9pm tonight on January 3.

DON’T MISS:Kate and William broke ‘special’ tradition they have with children

The peak is most likely to last a few hours, but meteor spotting can require patience.

You can recognise the meteors by their bright blue appearance and fine trains.

The conditions for spotting meteors should be favourable, as it closely follows the New Moon meaning the sky is clearer than usual.

You can spot meteors without a telescope or binoculars, you should be able to spot them with the naked eye.

Royal Museums Greenwich says: “Hunting for meteors, like the rest of astronomy, is a waiting game, so it’s best to bring a comfy chair to sit on and to wrap up warm as you could be outside for a while.

“For the best conditions, you want to find a safe location away from street lights and other sources of light pollution.

“The meteors can be seen in all parts of the sky, so it’s good to be in a wide open space where you can scan the night sky with your eyes.”

What is the best way to photograph a meteor shower?

Witnessing a meteor shower is an incredible display, and you may want to take a photograph to remember the moment.

Capturing a meteor shower can be tricky, as it’s difficult for a photograph to reflect the beauty of the real thing.

A tripod can help you to angle your camera at the right part of the sky for your picture.

Shooting pictures on a long exposure can help you to capture the impressive trains of the meteors.

The Quadrantids are most visible from the Northern Hemisphere, meaning we have a good chance of seeing them in the UK.

The shower was named after a former constellation Quadrans Muralis which is now part of Boötes.

03/01/2022 Lifestyle Comments Off on Quadrantids meteor shower: Best time to look into the night sky to see the meteor shower
Lifestyle