Queen Elizabeth II’s 95th birthday is a poignant one as it falls just four days after her husband Prince Philip’s funeral. This year no official new portrait was released to mark the milestone but the Palace shared a personal message from the Queen instead.

The Queen’s 95th birthday message thanked fans for their kind wishes and shows of support as she mourns the late Duke.

The poignant message read: “I have, on the occasion of my 95th birthday today, received many messages of good wishes, which I very much appreciate.

“While as a family we are in a period of great sadness, it has been a comfort to us all to see and to hear the tributes paid to my husband, from those within the United Kingdom, the Commonwealth and around the world.

“My family and I would like to thank you all for the support and kindness shown to us in recent days.” 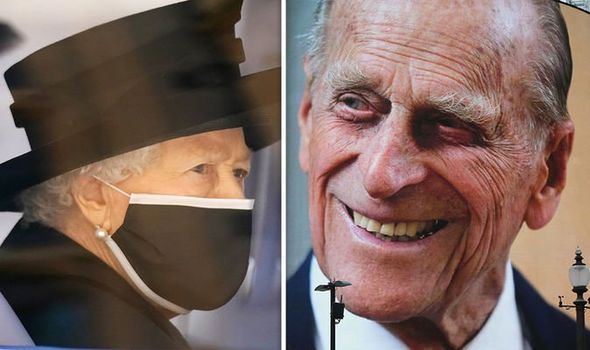 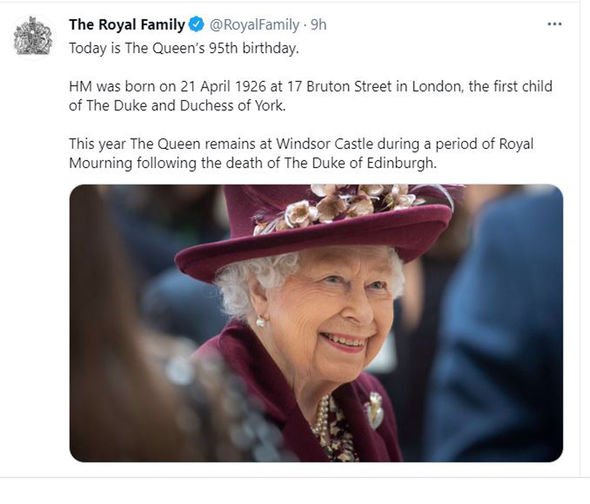 The Queen added: “We have been deeply touched, and continue to be reminded that Philip had such an extraordinary impact on countless people throughout his life.”

Language expert and author Judi James analysed the Queen’s message for Express.co.uk and shared her insights.

According to the expert, the Queen puts honouring her husband before marking her birthday.

Judi said: “This is a birthday message in name only, as the Queen uses only two lines to mention the fact that she is 95 today, spending the rest of the message referring to her husband and the tributes paid to him following his death.” 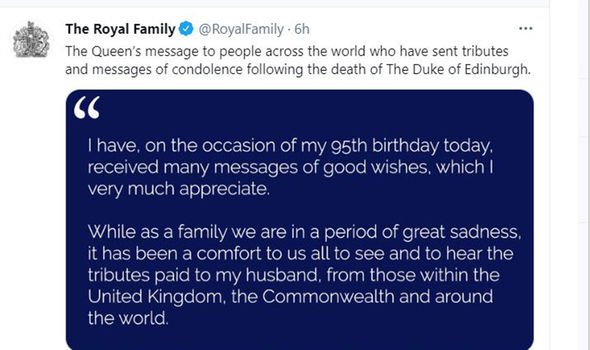 Judi added: “The birthday thanks are brief and understated in terms of emotion.”

The Queen seems “preoccupied with other sentiments” in her birthday message, Judi claimed.

She said: “The wording sounds a little unusual, suggesting the Queen was understandably preoccupied with other sentiments.”

In her message the Queen seems to hint at the grief she is experiencing following the loss of her husband, Judi claimed.

Queen birthday picture: Fans to miss seeing ‘relaxed side of Queen’ [PICTURES]
Sophie Wessex waited 11 years for title Kate Middleton got in 8 [INSIGHT]
Why does the Queen have two birthdays? [VIDEO]

She added: “Her ‘neutral’ words about her birthday messages: ‘Which I very much appreciate’ seems to hint at the levels of grief she is feeling, despite their customarily stoic sound.

“It’s hard to not get the feeling that she has barely noticed the fact that it is her birthday this year.”

The Queen’s use of language seems to suggest her mind is elsewhere on her birthday this year.

Judi said: “This mention of her birthday might have come first in the message but it still reads like an add-on, suggesting where her thoughts really do lie right now.”

“The words become more eloquent in the second paragraph, where the Queen moves the attention away from herself and onto her husband and the tributes being paid to him.

“Here she speaks on behalf of her family as well, again apparently deflecting attention away from herself.

“‘We as a family…’ and ‘…a comfort to us all…’ are words that stress the scope of the grief that she refers to as ‘great sadness’ in what sounds like an understatement.”

The Queen’s message hints at how much she appreciates the support of her family right now, Judi claimed. 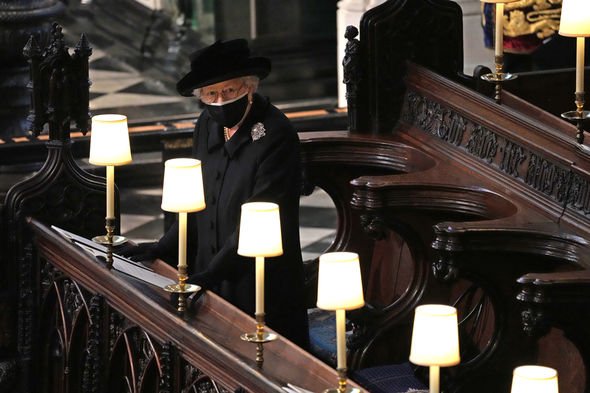 The expert added: “These references to family sadness rather than just her own period of mourning lets us know how much she is appreciating the presence of her family right now and how they are all mourning their loss together in a group, albeit a socially distanced one.”

Judi claimed the Queen seemed to want to reassure royal fans she was doing OK after many felt for her having to sit alone during the Duke’s funeral.

Judi said: “It is as if The Queen is trying to offer reassurance to the royal fans who were so upset to see her sitting isolated at the funeral.

“The use of ‘My family and I’ and ‘we’ appears in the last paragraph too and the Queen ends with a touching tribute to her husband as she writes:…we continue to be reminded that Philip had such an extraordinary impact on countless people throughout his life’.

“The use of the word ‘Philip’ rather than his titles sends a fondly informal and accessible message rather than a more regal one, which is perhaps in keeping with the mentions on the day that the Prince was fuss-averse.”