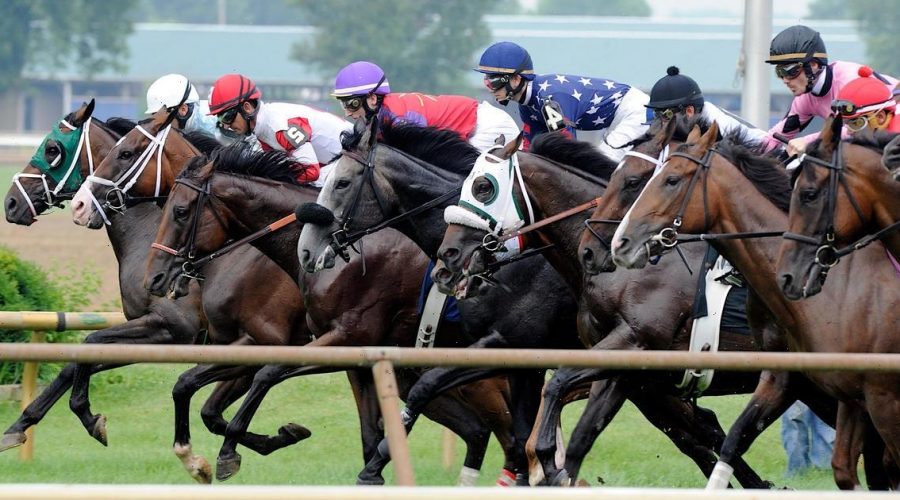 A 2-year-old filly got loose before a race at a Kentucky track and ran onto a highway alongside cars before being apprehended Saturday.

The filly named Bold and Bossy got loose on her way to the starting gate at Ellis Park. The incident, which was live-streamed on YouTube, shows jockey Miguel Mena being thrown off and the filly running away.

She then ran off the track and over a levee heading to U.S. 41. Bold and Bossy ran briefly onto Interstate 69  and Veterans Memorial Parkway, with a posse of trainers chasing her in their vehicles. Police and the sheriff’s department also showed up.

Just in: Ellis Park officials tell Eyewitness News a race horse bucked its rider and escaped the track before the first race this afternoon. It traveled along US-41 before the owner managed to rescue it at the Evansville Water Department. pic.twitter.com/YWbaklhDaO

Cullen Stanley was in his car on Interstate 69 when he managed to capture the horse on video, which he shared on Facebook.

“Horse running at me full speed on I-69 today,” the video caption says. “No idea how it started or ended. Odd times we live in.”

Another Facebook user, Amanda Waggener, posted video of the horse running on the highway.

“Thank God for all the people who jumped in to go find her because she left town,” her owner-trainer Michael Ann Ewing said from Lexington.

Ewing said Bold and Bossy lost two shoes and a hind hoof knocked some flesh off the heel of a front foot during her escapade, but she wasn’t seriously injured. The trainer said the filly was cramping from dehydration when she was finally corralled by a man and his wife.

Bold and Bossy was wearing her saddle and blinkers to restrict her vision as she galloped down the highway close to vehicles in other lanes. The blinkers probably made it harder to stop her, said Jack Hancock, a trainer who gave chase.

“She couldn’t see anything beside her, so that made it a little worse trying to catch her,” he said. “I’ve been here all my life and I’ve never seen one to do a run like this, not that far and not that much highway.”

Horses that get loose on a racetrack often run back to the familiar setting of their barn, but Bold and Bossy had shipped in from Lexington to run in a race for the first time.

“She didn’t know where to go home,” Hancock said.