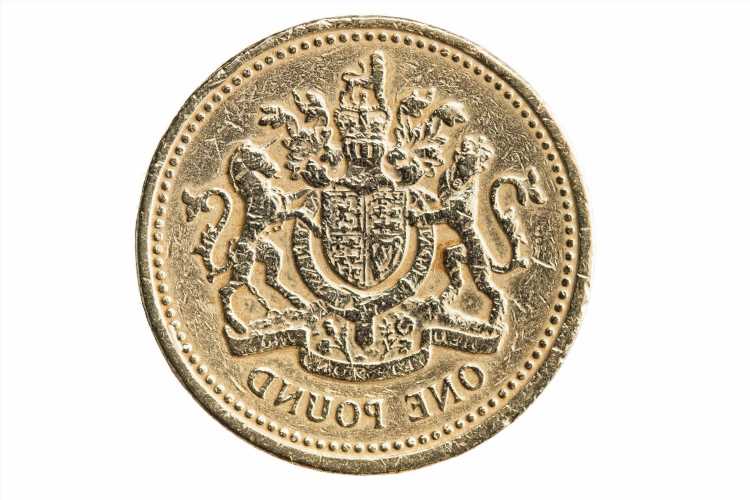 A RARE £1 coin has sold for £155 after a minting error left it with upside down writing on its side.

It sold for more than 100 times its face value on eBay last month after two buyers locked horns in a bidding war for it.

Coins with mistakes tend to be among the highest values because of their extremely limited numbers.

The seller claimed the £1 coin was an old round one issued back in 2015, featuring the Royal Coat of Arms.

These old “round pound” coins ceased to be legal tender back in October 2017.

They were replaced by the new 12-sided quid instead, which are much more difficult to counterfeit.

The old round pound features the latin phrase “DECUS ET TUTAMEN” inscribed on the edge of the coin, which means “glory and defence”.

But the seller claimed a minting error had left the words on the coin inscribed upside down.

This means you would need to hold the coin with the Queen's head facing downwards to be able to read it.

The same error has previously been found on other £1 coins, and some have been flogged for thousands of pounds.

An old £1 coin celebrating Northern Ireland sold on eBay for a huge £5,100 – and its latin inscription on the side was printed upside down too.

The dangers of selling your coins on eBay

THE most valuable coins are usually those that have low mintage numbers or those with an error.

The most valuable coins are usually those that have low mintage numbers or those with an error.

These are often deemed the most valuable by collectors.

Once you’ve found out whether the coin is real or not, you have a number of options – either selling it through a coin dealer, at auction or on eBay.

Sell it at auction

If you’ve got a coin that you would like to sell at auction then you can contact a member of the British Numismatic Trade Association.

They usually deal in very old coins but they may be able to help you assess whether it’s worth selling your coin at auction or whether it would be valuable to collector.

Sell it on eBay

If you want to sell the coin you’ve found in your spare change on eBay then you need to know the risks.

Remember to set a minimum price that is higher or at the very least equal to the face value of the coin.

Even if your coin “sells” on eBay for a high price there’s no guarantee that the buyer will cough out.

It its terms and conditions, the auction website states that bidders enter a “legally binding contract to purchase an item”, but there’s no way to enforce this rule in reality.

The most eBay can do is add a note to their account acout the unpaid item or remove their ability to bid and buy.

This is because in order to sign up to the website users do not need to put in valid bank or PayPal details before making a bid.

If a bidder refuses to pay, then the only option for sellers is to give “second chance offers” to other bidders or relist the item.

For items of a high value eBay recommends that sellers put a limit on their listing to approve bidders.

It means bidders must email you before placing a bid but NOT that they must pay out the cash if they win.

Other minting errors have also been found on £1 coins.

One was sold for £112 in February last year because the silver-coloured inner part of the coin was mis-struck – making it look like a fried egg.

Meanwhile, coin collectors were flogging rare £2 Shakespeare skull coins which had inscription errors on them last year for up to £230.

The £2 coin is supposed to have "WHAT A PIECE OF WORK IS MAN" inscribed on the side of the coin, which is a line from Hamlet.

But eagle-eyed collectors noticed some had "FOR KING AND COUNTRY" written on it instead.

This is the phrase that's supposed to be on the Royal Mint's First World War £2 issued in 2016 to commemorate the role of the army in WWI.

If you notice your spare change looks different to what it’s supposed to look like, you might want to keep hold of it and check out how much it could be worth on eBay.

You can also use an online tool called Coin Hunter, which gives you an estimated valuation of your coin based on the average of the most recent sales, as well as a range of how much you can expect it to fetch.

You can also check how much coins previously sold with the same or similar minting error have been sold for on eBay to give you an idea of pricing.

To do this, search the full name of the coin, select the "sold" listing and then toggle the search to "highest value".

It will give you an idea of the amount of money that the coin is going for.

A rare 50p coin featuring a picture of Kew Gardens has been sold on eBay for £255.

We round up a list of the rarest and most valuable 50p coins which could be worth up to £707.

There are also many rare 2p coins – do you have one worth up to £600 in your pocket?