Resources Minister Madeleine King says gas companies who mount a High Court challenge or an advertising blitz will be wasting their money and should focus on engaging with the government, as the industry fumes over its contentious intervention into the energy market.

The furious response to the energy price laws rushed through the parliament last week has fuelled speculation the gas industry is gearing up for a protracted fight that could include a major anti-Labor advertising campaign like the one that derailed the Rudd government’s mining super profits tax a decade ago.

But as the industry weighs up its next steps, King urged the companies to “just keep talking” to government. 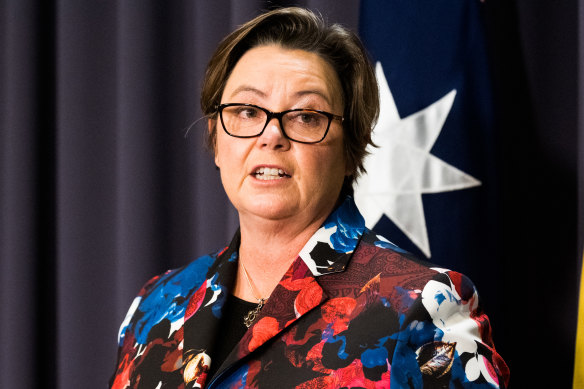 Resources Minister Madeleine King has urged gas companies to engage constructively with government rather than embark on an anti-Labor advertising campaign or challenge the energy laws in the courts.Credit:James Brickwood

“The sector is, of course, entitled to undertake those kinds of campaigns and we’ve seen them do it before… I hope they don’t. I think it could be pretty wasteful spending,” she said.

“This is an intervention that no one really wanted to do, but it was essential to do and the more constructive the gas companies can be in this consultation period over the next couple of months, I think the better the result will be for the whole country.”

King, who was locked in rolling discussions with gas producers last week as parliament was recalled to rush through the measures, said she had received no indication from the sector that it was preparing a legal challenge. But she warned “they won’t make any friends in the wider community by doing it” and “in the end, only the lawyers win”.

“No one has mentioned that (a legal challenge) at all,” King said.

“I hope that does not happen, but it is everyone’s right to use the court system… so if they want to do it, I guess go right ahead.

“I’d rather they didn’t and I think engagement is a better way to spend one’s time and money on trying to get this right.”

As part of an energy package the Albanese government claimed will take “the sting” out of power price hikes, the new laws imposed a 12-month price cap of $12 a gigajoule on uncontracted gas, and — in a move considered more problematic by the industry — created a permanent code of conduct to enforce the sale of gas at a “reasonable price”.

King will spend the coming weeks negotiating with industry on the final design of the code and how the “reasonable price” measure will work, but she said it would not be removed entirely despite the concerns raised by the sector.

“I just can’t see that happening because we have work-shopped this for a number of weeks, and it’s the best way we see [of] forcing your purchasers and producers of gas to negotiate well with each other,” she said.

The Australian Petroleum Production & Exploration Association, the lobby group representing oil and gas producers, has called the changes “reckless reforms” that would give the government “unprecedented control” over the Australian gas market. It declined to comment on whether it intended to challenge the laws in court or mount an anti-government advertising campaign.

Constitutional law expert Professor George Williams said he expected lawyers for the gas companies would spend the next few weeks scrutinising the legislation closely for any avenues that could be used to mount a High Court challenge.

“When you’ve got a combination of legislation drafted quickly, vested interests with deep pockets and a complex scheme involving cooperation across the federation, I’d be really surprised if those companies affected aren’t getting some legal advice to look into this,” he said.

Credit Suisse analyst Saul Kavonic, who has flagged the likelihood of the industry responding to the laws with an anti-government advertising campaign or a legal challenge, said companies and regulators will now “scramble to try to make sense of the policy details, and tweak regulations, before a market pile-up arises”.

The deal, which commits to delivering 157 petajoules of additional domestic gas – about 25 per cent of annual east coast demand – during 2023, was brokered following a forecast from the national consumer watchdog that the eastern seaboard was facing a 56-petajoule shortfall.

Shedding light on a meeting she had with the producers last week, King said each group was “keen to maintain their commitments” and the agreement would not need to be renegotiated.

“They’re just considering the implications, having an appropriate pause and it’s my expectation that those expressions of interest will restart as soon as they can make sure they’re complying with the new regulations,” she said.

18/12/2022 Lifestyle Comments Off on Resources minister urges gas companies to work ‘constructively’ with government, not lawyer up
Lifestyle