Pub owner hits back at ‘unadulterated b*******’ Tripadvisor review which blasted ‘tasteless food’, ice-cream that was ‘too icy’ and ‘uncomfortable cutlery’

The owner of Worcestershire pub has blasted a diner who left a scathing two-star review on TripAdvisor criticising the cutlery, food, drinks, and service.

According to the reviewer, ‘Bubbamum’, they had a poor experience at the Plough Inn, near Bewdley, despite it having received 522 five-star and 174 four-star write-ups, out of a total of 1,152.

And the pub’s owner Mark G did not take kindly to the two-star review, which was titled Friendly service, awful food, which he described as ‘unadulterated b*******’.

The review said: ‘First time here on stopover mid journey from Wales to home. Had high hopes of a nice carvery but our hopes diminished when the drinks arrived flat and watery (Fosters and a lemonade) followed by very anemic looking dry chicken skewers, watery soup and unappealing mushrooms.

‘Carvery was edible but tasteless with tough beef and biscuit worthy yorkshires. Cutlery also awful, uncomfortable in the hand and bladeless. 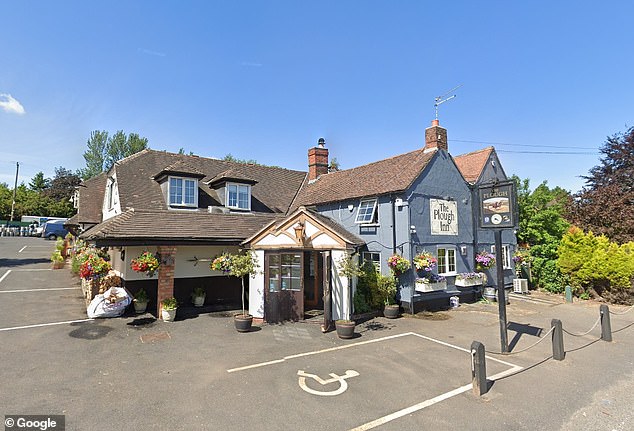 The Plough Inn, in Worcestershire, recently received a two-star review from a diner, who criticised the food and drinks – prompting the pub’s owner to leave a scathing response

‘Stay well clear’: the two-star review of the pub blasted various aspects of the dining experience – including the cutlery and the ordering system

‘We attempted dessert as we had already paid ( a weird concept where you pay for your courses at the bar and then the waiter takes your order at your table?!!).

‘The ice cream was very icy, the lemon meringue filling like glue and the cream like water. We now understand why they take payment before feeding you…stay well clear!!!!’

‘Thank you for your TA.

‘Right then how do I address this unadulterated b******?

‘If we could rate you on Tripadvisor you would probably get 3 stars, maybe if you could have thought just that little bit harder (PROBLEM I SUPPOSE) and said you tripped up on the way in, then bumped your head on the beam to the restaurant, you would achieve the 5 star status!!!!!

‘I’ll put a strong recommendation into our chefs, to change their recipes even though they execute 10 thousand meals a month. 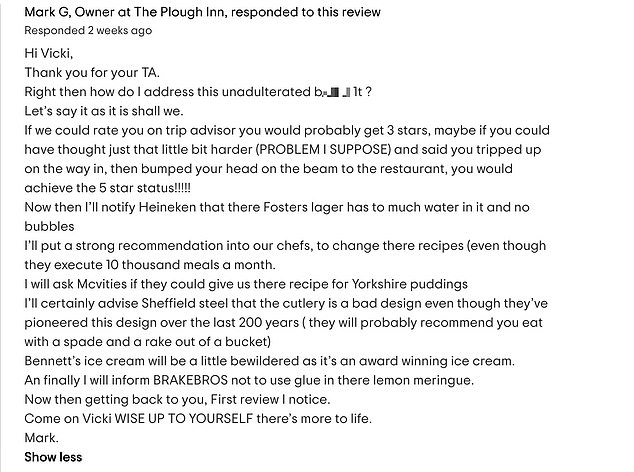 The pub’s owner, Mark G, did not take kindly to the two-star review, and fired back with a scathing riposte

‘Bennett’s ice cream will be a little bewildered as it’s an award winning ice cream.

‘An finally I will inform BRAKEBROS not to use glue in their lemon meringue.

‘Now then getting back to you, First review I notice.

‘Come on Vicki WISE UP TO YOURSELF there’s more to life.’

Despite the seething two-star review received by the pub, it has received numerous positive write-ups, and has an overall score of 3.5 stars

Among the positive reviews, is one which says: ‘Greeted by a lovely lady when we arrived, taken to our table. Excellent service throughout. All of the staff were really pleasant.

‘We had the set menu for £12, 3 courses wow!! The menu was amazing such a great choice. One of the best places I have eaten at.

‘Will be back next week, can not praise enough. Well done to a fantastic team, already recommended to friends who are attending on 30.7.22 and ourselves again next week.

And another added: ‘Lovely pub , had the £12 pound 3 course menu , food was tasty and great value . Can’t fault the place.’