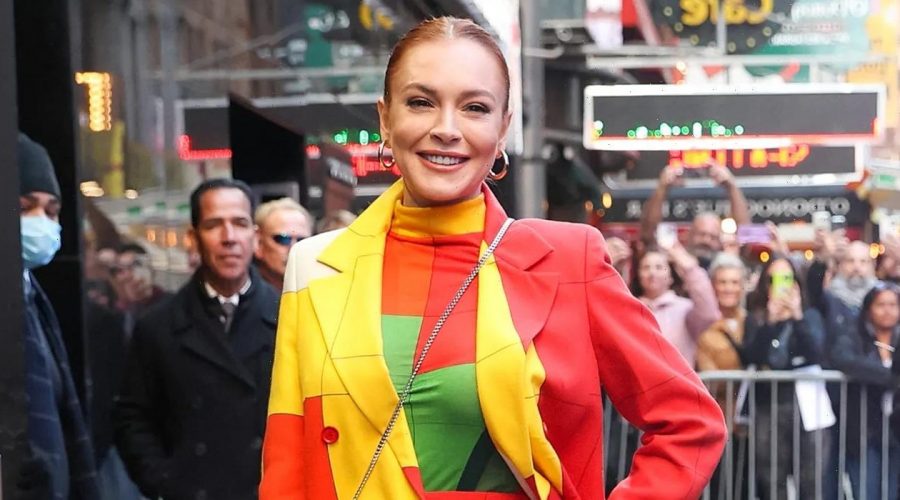 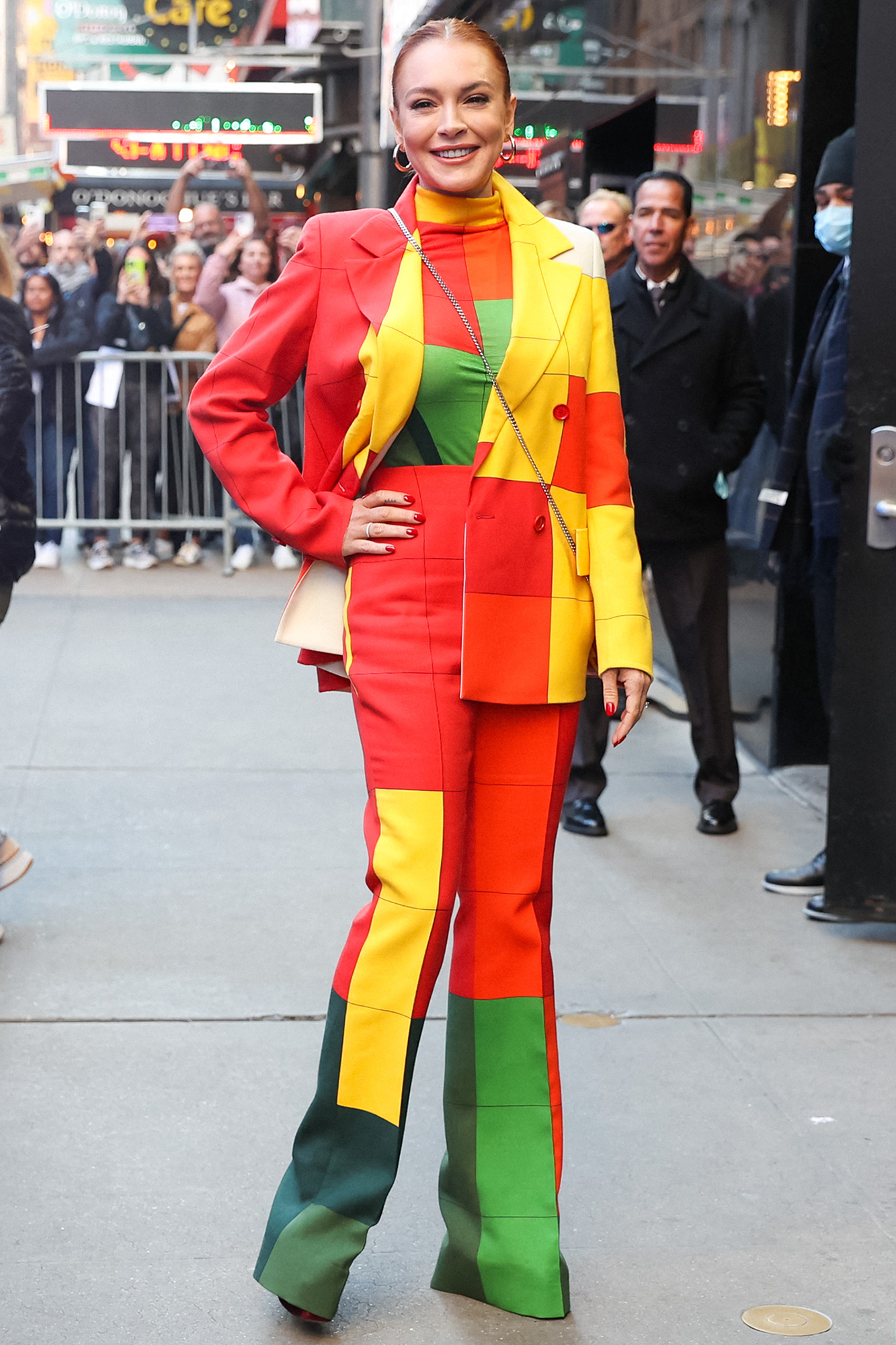 It’s Lindsay Lohan‘s world and we’re just living in it! The actress made the streets of New York City her own personal runway while heading to the Good Morning America studio on Tuesday, November 8.

Lindsay Lohan Through the Years

For her appearance, Lohan, 36, looked vibrant in a suit by Akris. The ensemble featured a double-breasted blazer and coordinating wide-leg trousers with a patchwork pattern of red, yellow, orange and green. The Freaky Friday star complemented the look with a matching turtleneck and towering platform heels that came in warm maroon hue. She accessorized with chunky hoop earrings and a crossbody handbag. For her glam, Lohan kept her makeup soft, rocking a subtle pink lip and a little mascara. The Parent Trap actress had her hair styled in a sleek bun.

During her interview, Lohan opened up about her new Netflix movie, Falling for Christmas, and told anchor T. J. Holmes that she’s excited about her return to acting.

“It’s a great movie,” she said. “I wanted to make this movie because I missed being on set and I really miss bringing characters to life, and this was just the perfect script full of love and family and romance and joy all in one.”

Chord Overstreet, who stars alongside Lohan in the movie, echoed similar sentiments. “It’s a really fun, feel-good holiday comedy and Lindsay’s fantastic in it,” the Glee alum, 33, told Us Weekly exclusively last month.

Overstreet added that working with the Georgia Rule actress and getting to watch what she does “so well up close” was a “really fun” experience. 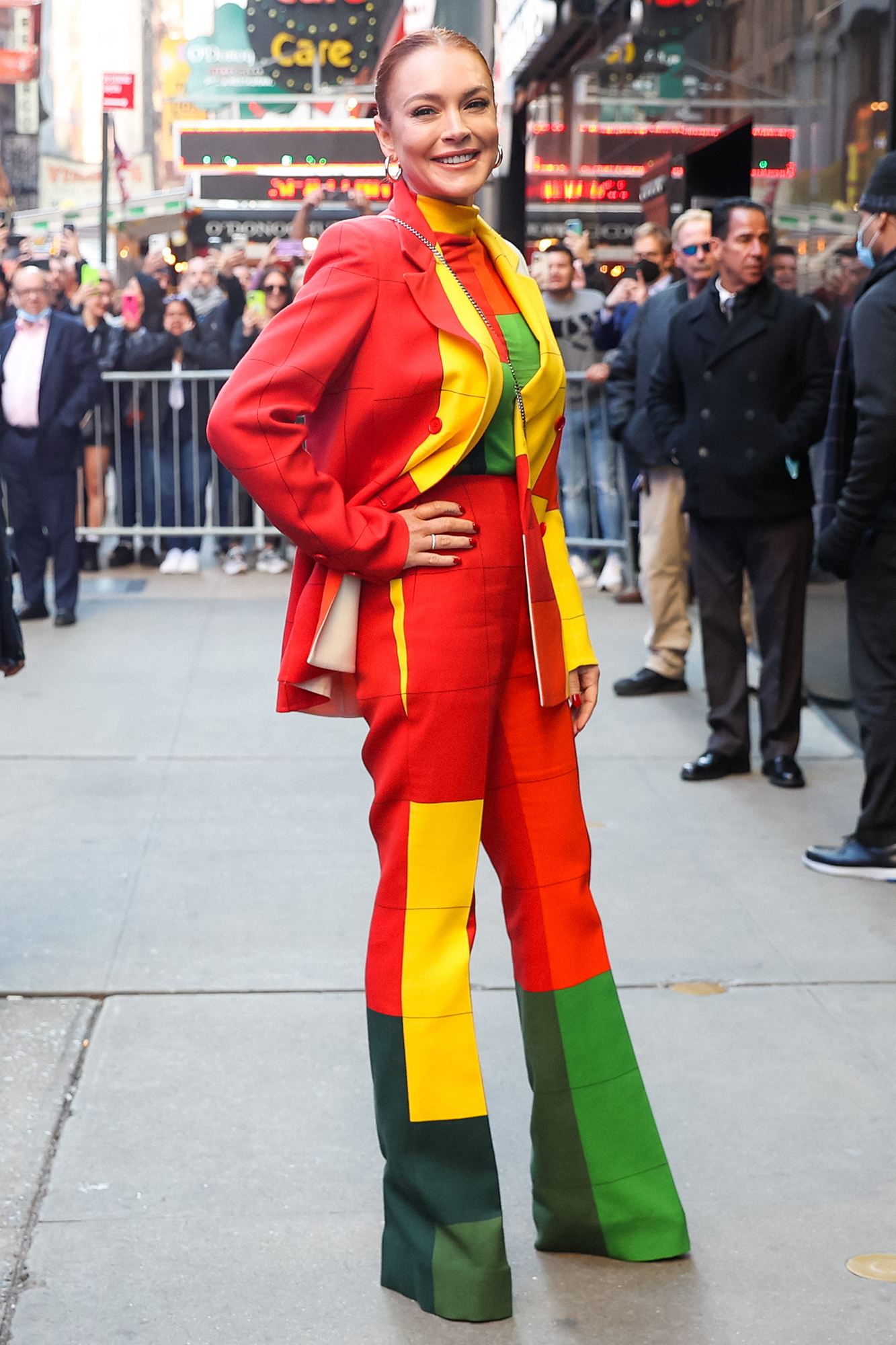 In the romantic comedy, which premieres on November 10, Lohan plays a spoiled heiress who gets amnesia following a skiing accident in the days leading up to Christmas. She wakes up in a small town where struggling inn owner Jake (Overstreet) and his daughter look after her and help her find herself again.

A Guide to Every Holiday Movie on TV This 2022 Season

Lohan is also making a musical comeback. As part of the movie’s soundtrack, The New York native released a cover of “Jingle Bell Rock.” As fans know, she famously danced to the hit in the beloved film Mean Girls, which was released in 2004 and also starred Rachel McAdams, Tina Fey and Amanda Seyfried.

“What a bright time, it’s the right time, to track the night away … to this music video for @LindsayLohan’s cover of Jingle Bell Rock from Falling for Christmas,” the official Netflix account tweeted on November 4.

09/11/2022 Lifestyle Comments Off on Retro! Lindsay Lohan Takes It Back to the '70s in a Vibrant Patchwork Suit
Lifestyle