Specialists from the NSW Rural Fire Service could soon be assisting in the fight against deadly wildfires raging across California, with a request for assistance expected to be just days away.

Six people have been killed and around 700 buildings destroyed by 560 wildfires currently raging across the western American state. 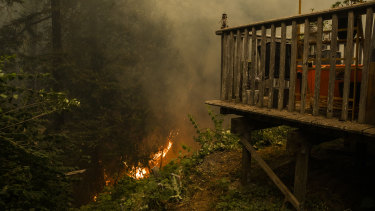 No formal request has yet been made to the RFS, but spokesman Ben Shepherd said a request for incident management specialists was probable "in coming days".

Around 175,000 people were forced to evacuate their homes around the San Francisco Bay Area, forest areas at Santa Cruz and large sections stretching to Sacramento.

Nearly 14,000 firefighters have been deployed to the blazes, but the state is expected to call on Australia for assistance from "the world's best wildfire-fighters", California Governor Gavin Newsom said this weekend.

Any request from a foreign government would be examined by the Australasian Fire and Emergency Service Authorities Council and Emergency Management Australia, a division of the federal Attorney-General's Department.

"Traditionally we haven't sent firefighters into the US. We have sent to Canada, but not to the US," Mr Shepherd said.

"We are in a pretty good position [to assist] compared to where we were at this stage last year. The consideration would just be what the request is in relation to COVID-19 and quarantine restrictions for going there and on return."

Among those killed were former US service men Ian McBeth, Paul Hudson and Rick DeMorgan Jr who were killed when a large air tanker they were flying crashed, south of Canberra.