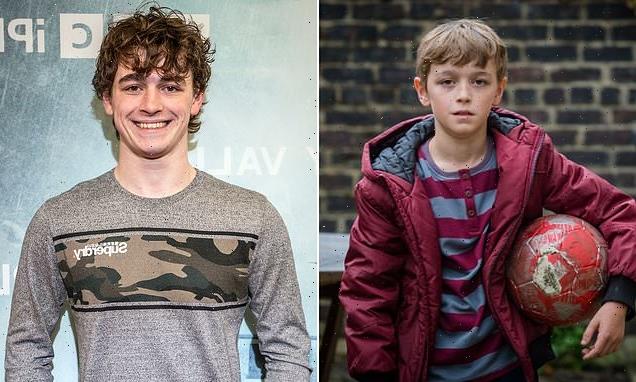 From angry schoolboy to secretive teen: Rhys Connah, 16, reprises his role as Ryan in Happy Valley after first appearing aged 8 in season one – and fans can’t believe he’s all grown up

Happy Valley returned to BBC One with a bang last night as viewers welcomed back tough-as-nails police sergeant Catherine Cawood (Sarah Lancashire) and her dysfunctional family.

The first episode saw the Cawoods mark Catherine’s grandson Ryan’s 16th birthday, set nearly a decade after series two ended – and fans were quick to comment on his transformation into a teenager.

The show’s creator Sally Wainwright previously revealed that the programme took a deliberately long pause between series two and three as she wanted to wait for Rhys Connah, the actor who plays Ryan, to grow up and reprise his role as an angsty teenager.

And in the series three premiere, the talented young thespian proved it was worth the wait as he stropped around on the football pitch while in goal and got up to mischief on his bike, mocking his cruel PE teacher Mr Hepworth before cycling off.

Rhys first appeared as Ryan Cawood when he was just eight years old in the first series of the gritty West Yorkshire police drama.

With a mop of brown hair and newly-cut adult teeth, the adorable child actor charmed viewers portraying the son of murderous rapist Tommy-Lee Royce (James Norton), as he gave flashes of an uncontrollable temper and a foul mouth. 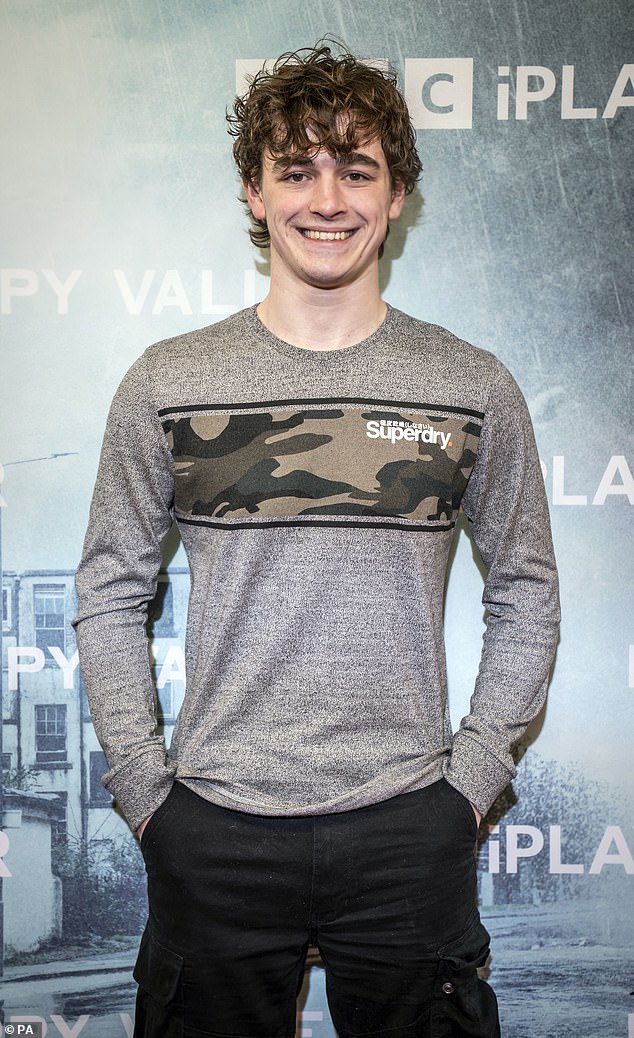 Rhys Connah, now 16 years old, has reprised his role as Ryan Cawood in the gritty BBC drama Happy Valley, after first starring in the drama when he was just eight years old (pictured at the launch of the third series) 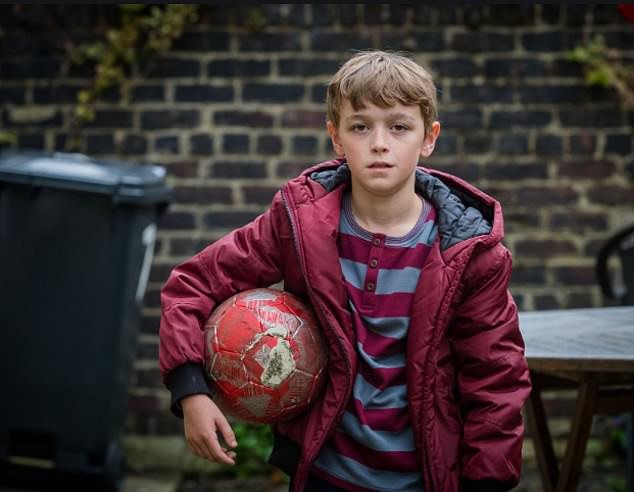 Rhys Connah first appeared in Happy Valley as an eight-year-old playing frustrated young boy Ryan Cawood, who is raised by his grandmother after his mother Becky took her own life after being raped (of which Ryan was a product)

Portraying a young boy who never knew his parents after his father was sent to prison before he was born and his mother took her own life after being raped (of which Ryan was a product), he was full of questions about his parentage and couldn’t understand why his grandfather Richard and uncle Daniel wanted nothing to do with him.

Throughout the series the young Ryan gets himself into trouble at school for throwing chairs and swearing at teachers, and the boy’s frustration spills out of him when he calls his granny ‘an ugly old b****’.

However, Rhys portrays the young boy’s innocence when he finally begins spending time with his father Royce, who is hiding on a narrow boat while on the run after murdering a police officer and kidnapping and raping a young graduate.

In a scene which chilled viewers, Royce doused his young son in petrol and threatened to set him alight in front of Catherine, while the frightened young boy screamed and called for his granny.

The second series of Sally Wainwright’s drama was set just 18 months after the first and saw Ryan reach his 10th birthday as he grew more and more curious about his father (who was back in prison for kidnap, rape and murder). 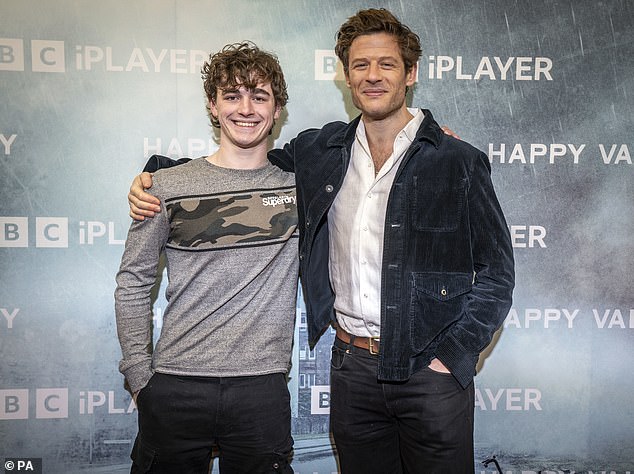 Rhys plays the son of murderous psychopath Tommy Lee Royce (played by James Norton) after Royce raped Ryan’s mother Becky (who took her own life before the series began). Pictured: The actors at the launch of the third series

As Catherine battled with the young boy to stop him asking questions about evil Royce and shut down any suggestion of the pair making contact, the series raised the question of nature versus nurture as she feared her grandson may take after his father, despite all her efforts to raise him well.

After the series ended, Wainwright decided to bide her time before writing and creating series three.

She explained to Radio Times: ‘The plan was to wait for Ryan to be older so that he can make his own choices about whether he wants to have contact with his dad or not. So it really explores that.’

The creator added: ‘He’s someone who’s trying to make sense of his past and find out the truth about his past.’

Upon his return to TV screens, viewers were shocked to see Rhys’s transformation from a young boy to a tall teenager, as they joined the Cawood family seven years on.

In Ryan’s first scene in series three, he is pictured in goal on the football pitch while playing with his school team – and although he looks different in stature, some things about the actor’s portrayal of the character haven’t changed at all, including his fiery temper.

He shouts at his teammates (in a deep voice), who have given away possession of the ball to the opposing side before he is faced with a striker who taps the ball past him into the goal, leaving him frustrated and blaming other people for the 6-0 loss.

After seeing an older Ryan onscreen, viewers took to Twitter to express their shock at how he has grown up.

Another wrote: ‘Feels so weird seeing Ryan all grown up.”

Away from Happy Valley, Connah has had roles in films including The Runaways in 2019 alongside Jodie Comer, and The Snow Maze in 2020.

However, aside from these acting credits, the teen has lived a relatively quiet live in between series two and three of the BBC drama.

Connah’s Instagram and Twitter accounts share little snippets of his life on and off screen and ahead of the release of series three, he has shared affection for his co-stars.

In a tweet posted last summer after the filming had wrapped, he wrote: ‘After the most incredible journey that’s Ryan Cawood wrapped on Happy Valley.’

On Mother’s Day this year, Rhys retweeted a video montage of clips between himself and onscreen mother Sarah Lancashire as Catherine, with the caption: ‘Happy Mother’s Day everyone.’

His Instagram account also gives an insight into Connah’s life, and he posted photos of himself with a friend on new year’s eve as the pair watched the fireworks to ring in the new year.

02/01/2023 Lifestyle Comments Off on Rhys Connah, 16, reprises his role as Ryan in Happy Valley
Lifestyle