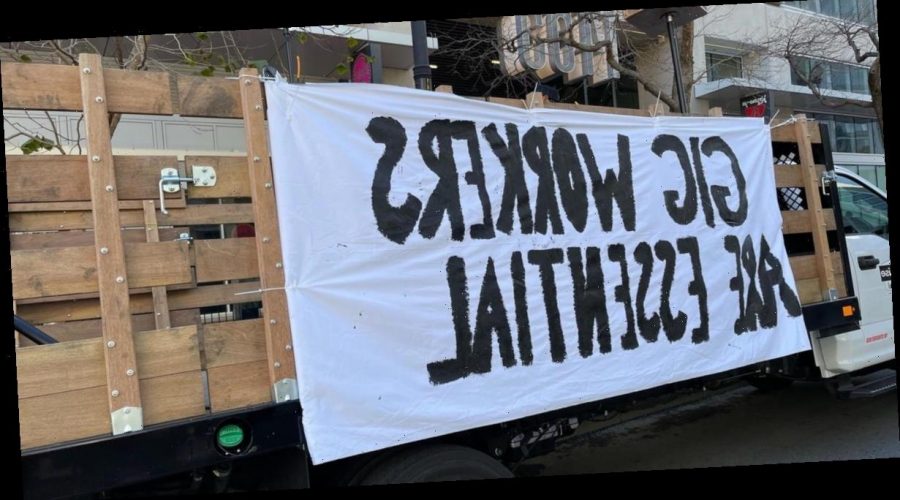 Rideshare and delivery drivers gathered outside Uber’s San Francisco headquarters Wednesday morning to demand that companies like Uber, Lyft, and DoorDash provide them with adequate personal protective equipment and compensate them for the time it takes to disinfect vehicles throughout the day.

Dozens of drivers from several app-based services blocked off Market Street in downtown San Francisco and turned off their apps for two hours to highlight what they described as a lack of action from gig companies to keep them safe during the coronavirus pandemic.

“Eleven months into this pandemic and workers are still asking for the most basic life-saving protections for themselves, their families, and their communities,” Cherri Murphy, a Lyft driver and organizer with Gig Workers Rising, one of the groups behind the protest, said.

Organizers distributed masks and cleaning supplies to drivers, who wiped down their cars in public to demonstrate the time and effort required to keep themselves and customers safe. Most drivers spent 10 to 15 minutes using wipes and cleaning spray to disinfect frequently touched surfaces of the car, including door handles and lock buttons.

“I need the companies to show us that they really support us,” said Saori Okawa, a delivery driver for DoorDash and Instacart. “They need to give us way more PPE and more often.”

Okawa told CBS News she works 12-hour shifts five to six days a week and cleans her vehicle every day before leaving home. Throughout the day, Okawa said she stops to disinfect her car three to four times.

“I need masks and I need gloves because we’re handling food and I need face shield[s] because some customers don’t wear masks,” Okawa said. 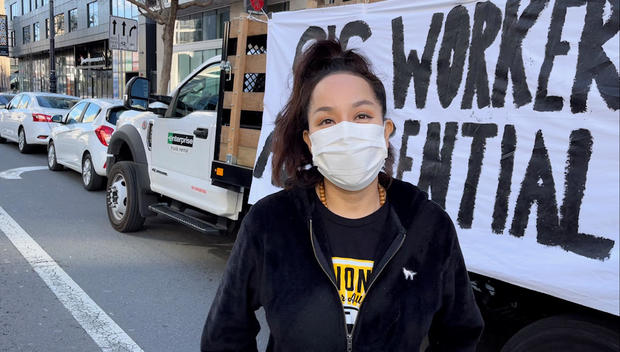 She added that customer ratings and the pressure to make on-time deliveries is part of the job — but now, she said, “we are under the pressure of cleaning our cars, getting enough PPE to protect ourselves and protect the customers and that’s a lot of stress.”

Omar Gabides told CBS News he’s been driving for Uber for over three years and said working as a driver during the pandemic has been “terrible.”

“I have the safety responsibility for me, my family, and the passenger,” Gabides said. “We need more stability, more safety, and more resources from the companies.”

Gabides said he has received PPE equipment from Uber once in the last three months and said he buys Lysol wipes and hand sanitizer twice a week. “It’s expensive, it adds up,” he said.

Last summer, Uber said it set aside $50 million to purchase health and safety supplies for its drivers. A spokesperson told CBS News the company has already sent 21 million masks, disinfectants, hand sanitizers and gloves to one million drivers and delivery partners in the U.S and Canada. Uber drivers can also request free PPE supplies as needed directly from their apps, the spokesperson said.

“The workers have been providing critical services during the pandemic and we’ve been working and doing our best to support them while they’re supporting communities,” the spokesperson said.

In a statement to CBS News, a DoorDash spokesperson said “we continue to provide COVID-19 support for Dashers, including PPE, such as masks, gloves, wipes and hand sanitizer.” The spokesperson added that PPE items for drivers are free and can be reordered on a weekly basis.

Deryush Mobarakeh said he’s worked for a handful of the gig companies and focuses mostly on driving for Lyft and Uber. He said he drove over an hour from San Jose on Wednesday morning to support other gig workers in protest. 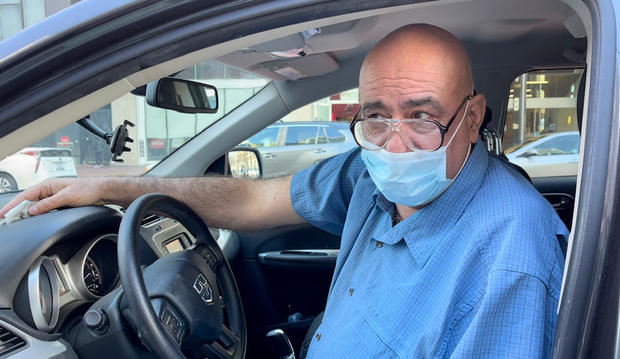 Mobarakeh told CBS News he cleans his car “after each ride” and added that “none of these companies have given us any PPE at all.”

“It all depends on us now. That is not the way,” Mobarakeh said.

Lyft said it has provided “tens of thousands” of face masks, cleaning supplies, and in-car partitions to drivers for free and will continue the policy. “Our most active drivers also received a free safety kit, consisting of a reusable cloth face covering, sanitizer and disinfectant,” a Lyft spokesperson said in a statement to CBS News.

Instacart said it distributes safety kits with washable masks and hand sanitizers. The company said it has distributed nearly 700,000 free kits to its shoppers, adding that workers can easily reorder more kits online as needed.

The city and county of San Francisco requires that employers provide their workers with basic PPE or reimburse them for PPE expenses. But gig economy drivers say little effort has been made to comply with these mandates.

Gig Workers Rising, a campaign that supports and educates app-based workers organizing for better wages and working conditions, said the lack of action on the part of the rideshare companies “is largely due to the passage of last year’s Proposition 22, which legally classified app workers as independent contractors and stripped them of many rights and protections that employees are entitled to.”

Prop 22, which passed with 59% support in California during last November’s election, allows gig companies to classify their workers as contractors instead of employees and therefore deny them protections granted to employees.

“With new restrictions on the ability of local governments to protect drivers in the aftermath of Prop 22, drivers fear that conditions will only deteriorate,” Gig Workers Rising said in a press release.

Matt Haney, who represents the 6th district in San Francisco and is one of 11 members on the San Francisco Board of Supervisors, said he’s introducing legislation requiring on-demand delivery app companies to provide drivers with sanitizing equipment and pay for the work of cleaning their cars.

“It is outrageous that while delivery app corporations continue to rake in profits, workers are forced to shoulder these burdens while struggling to make ends meet,” Haney said. “Workers have been doing their part since the start of the pandemic, it’s time for on-demand delivery service corporations to do the same.”