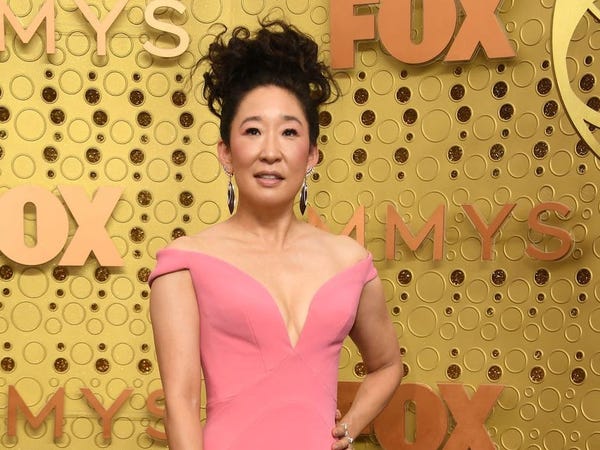 The 2020 Emmys may not have had a red carpet, but Sandra Oh still sent a powerful message through her awards show fashion.

Oh sported a purple KORELIMITED silk bomber jacket for the virtual ceremony on Sunday, and the design paid tribute to both her Korean heritage and the Black Lives Matter movement.

Embroidered on the front of the reversible jacket are the words "Black Lives Are Precious," written in Korean.

Oh told Vogue UK's Hayley Maitland that she chose the word "precious" because "the literal translation of Black Lives Matter is impossible in Korean" due to the way the characters are read from top to bottom and right to left.

The "Killing Eve" star also revealed that she chose the jacket's royal purple hue because it's "a super Korean color and brings a certain mindset for me," and noted that the bomber also has the dashes of the Korean flag and the national flower of Korea.

Oh's KORELIMITED bomber jacket can be purchased on the brand's site for $375. Her matching mask is also being sold for $24.

It was an honor to work on this year’s Emmys outfit for the talented @iamsandraohinsta with her amazing stylist @elizabethsaltzman. This BLM hanbok-style bomber jacket is embroidered with the phrase ‘BLACK LIVES ARE PRECIOUS' in Korean; and has the traditional Korean hanbok style and elements throughout. These reversible bombers are available now exclusively at korelimited.com in two styles: in lavender with a cropped fit and in black with a unisex fit. Link in bio to check out all the details and our inspiration behind the design. A part of the proceeds from the sale of these bombers will go towards Campaign Zero and Black Girls Code, an organization hand-selected by Sandra Oh.

The products come in both lavender and black (the lavender bomber has a cropped fit, while the black jacket is unisex) and a portion of the proceeds will go towards the nonprofits Campaign Zero and Black Girls Code — both of which Oh had chosen to support.

Emmys attendees were informed in July that the virtual show's dress code would be "come as you are, but make an effort!"

Black Lives Matter protests against police brutality were spreading across the US, and Oh said she knew she wanted to wear "fashion that's important and sends the right message."

"These are unusual times," she told Vogue UK. "And, in a lot of ways, it's been an extremely creative one. We're having to reconsider the whole system of awards shows and fashion and red carpets. Everybody's used to having relationships and fittings with designers of certain prominence — and this shift has forced me to reflect on who I am and how I express myself through clothes."

"After George Floyd's death and the protests that followed, I felt that as an Asian-American, a Korean-American person, I wanted to express my support for the Black community in a way that felt personal to my community," she added.

One of Oh's friends told her about designer Matthew Kim's brand KORELIMITED, which is based in Los Angeles. Oh then reached out to her stylist, Elizabeth Saltzman, and said she wanted to work with Kim for her Emmys look.

KORELIMITED shared more details about the collaboration on its blog, revealing that the brand wanted to create something that would "bolster visibility" of the Black Lives Matter movement.

The brand said it was also excited to work with Oh and was inspired by "her fearlessness."

"In the past, Oh mentioned the importance of preserving her identity as a woman of Korean descent in the less-than-diverse entertainment industry," the post read. "As our brand name stands for 'Keepin' Our Roots Eternal,' we found the idea of working with someone who shares a similar vision with us as a brand an amazing opportunity to create something unlike anything we had done before."

Representatives for Elizabeth Saltzman and KORELIMITED did not immediately respond to Insider's requests for comment.