RETAILERS have started Christmas and Boxing Day sales early this year by already slashing prices by up to 72 per cent.

Brits are predicted to spend less this Christmas, £408 each down from £421 in 2018 according to consultants PwC, so retailers are having to up their game to entice last minute shoppers. 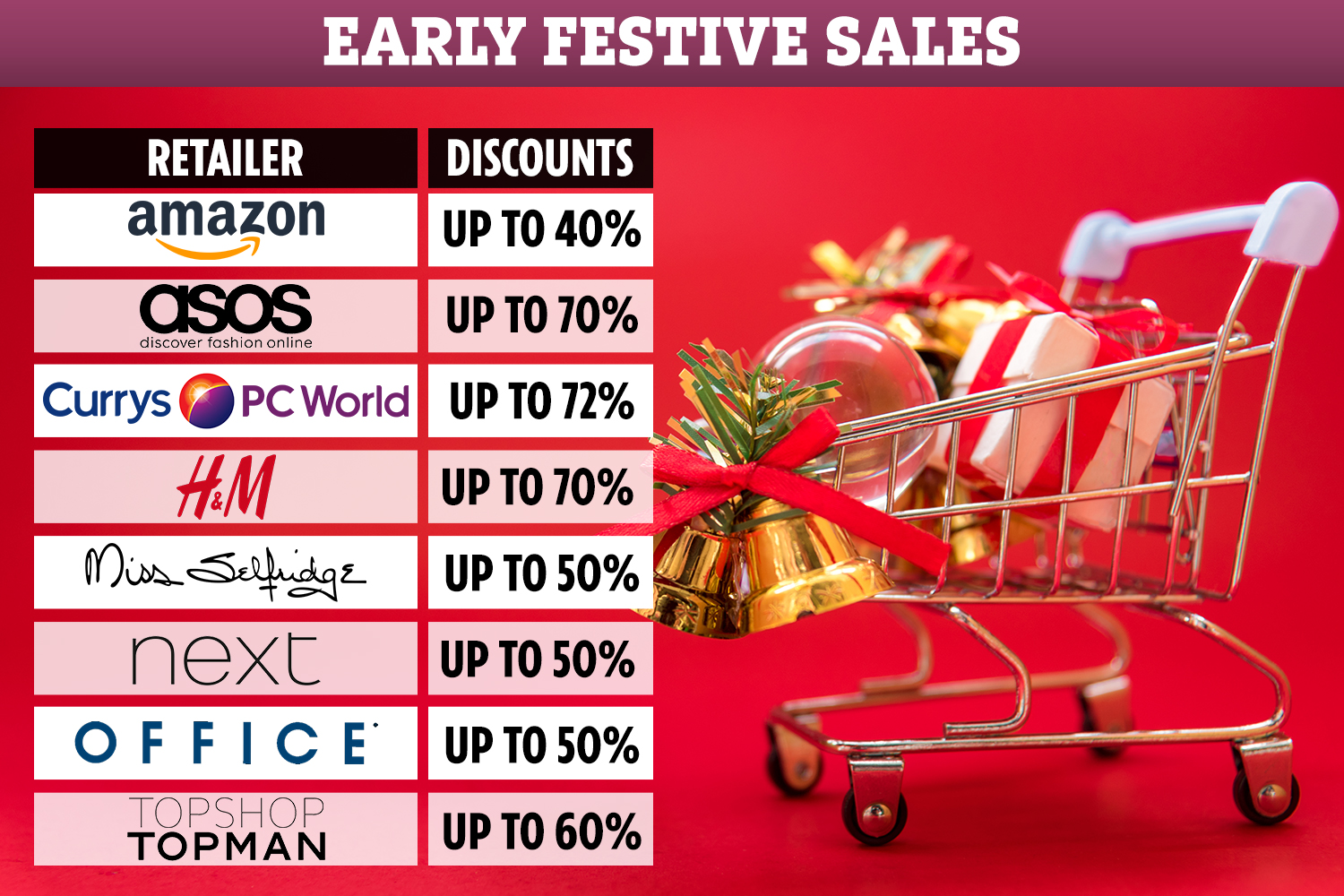 And because of Brexit stockpiling and weak autumn trading, shoppers can expect "bigger discounts" this year in the days leading up to December 25.

Following Black Friday success, Amazon has launched 14 days of deals with up to 40 per cent off Yankee Candles, iPads and Ted Baker goods.

ASOS and H&M have already both launched clearance sales offering shoppers up to 70 per cent off, while customers can bag up to 72 per cent off in the Currys PC World Crimbo deals section on its website.

MoneySavingExpert's deals prediction tool reckons that more prices drops are yet to come from retailers including John Lewis, Boots and Debenhams.

Which retailers have launched their sales early?

THESE are the retailers that have already launched their festive discounts:

Miss Selfridge – Up to 50 per cent

PwC figures show that this year there were discount sales in 68 per cent of stores on the high street and 88 per cent of online retailers.

This has dropped to just 36 per cent of high street shops currently running sales and 46 per cent of stores online.

So far, the early sales haven't been as good as they were last year, with some retailers slashing prices by up to 80 per cent.

"What we’ve seen so far this year has been similar to what’s happened in the past five years," Lisa Hooker, UK leader of industry for consumer markets at PwC, told The Sun.

"The number of stores running discount sales peak at Black Friday and then drop in the first few weeks of December, before creeping back up again.

"We expect more retailers to start launching their sales, which would have traditionally launched on Boxing Day, over the next couple of weeks."

Some of the top deals that we've spotted so far include a huge saving of £71.99 on a Tassimo TAS1003GB coffee machine in the Curry's PC World sale.

Our tips for finding the best deals in the festive sales

IT might be tempting to dive in and snap up LOADS of items in the Christmas sales but here’s how you can guarantee you’re getting a good deal.

PREPARE Research the items you want to buy and find out the cheapest price. Websites like PriceSpy, PriceHistory and CamelCamelCamel will give you historical data on prices so you can see how much you should pay.

EARN CASHBACK Check websites like Quidco and TopCashback BEFORE you place your order. Cashback websites PAY you to shop. All you have to do is click through their links and the money is added to your online account, usually within 14 days.

CHECK FOR CODES Take a look at The Sun Vouchers, and see if you can get extra savings with discount codes.

"It’s the same clearance stock going on sale now that will be in the January discounts," explained Lisa, "but there’s more of it.

"The discounts tend to get better in the New Year but there's less stock available."

The general election has partly been blamed for sales stumbling in the first two weeks of December but shoppers will bounce back in the days before Christmas.

Retailers are hoping that early sales will see a positive end to an otherwise challenging year for the high street.

Economic and political uncertainty, as well as poor weather since September, has had a damaging affect on footfall, reports PwC.

And brands are still being squeezed at both ends by rising operating costs, which eat into profits.

Casualties this year include Mothercare, Links of London, Select and Bonmarche.

Even Debenhams cut 22 out of 50 stores from its portfolio following going into administration in April, and House of Fraser extended its administration period for another year.

Despite the doom and gloom, Lisa believes we've seen the worst of the closures on the high street.

She added: "I think we will see more firms take out CVAs to consolidate their debts and maybe even cut back on their portfolios.

"But most of the big players have already taken action so I think there will be less than we’ve seen in 2019."

Related posts:
12/12/2019 Lifestyle Comments Off on Shops slash prices by up to 72% as Christmas and Boxing Day sales start early – The Sun
Lifestyle