It was a suitably stylish affair when Sir Terence Conran’s fashion designer granddaughter tied the knot with her art dealer boyfriend in a ‘covid-safe’ wedding earlier this month.

Coco Conran, 24, wore a dress of her own design for her low-key nuptials to art dealer Alex Vardaxoglou on 20 December.

The civil ceremony took place in Marlborough, Wiltshire, which remains in Tier 2, meaning 15 guests could attend.

Among those present were the bride’s parents Alex Willcock and Sophie Conran – the daughter of Sir Terence and his third wife, Caroline – as well as Coco’s uncle Jasper Conran and his partner, the artist Oisin Byrne. 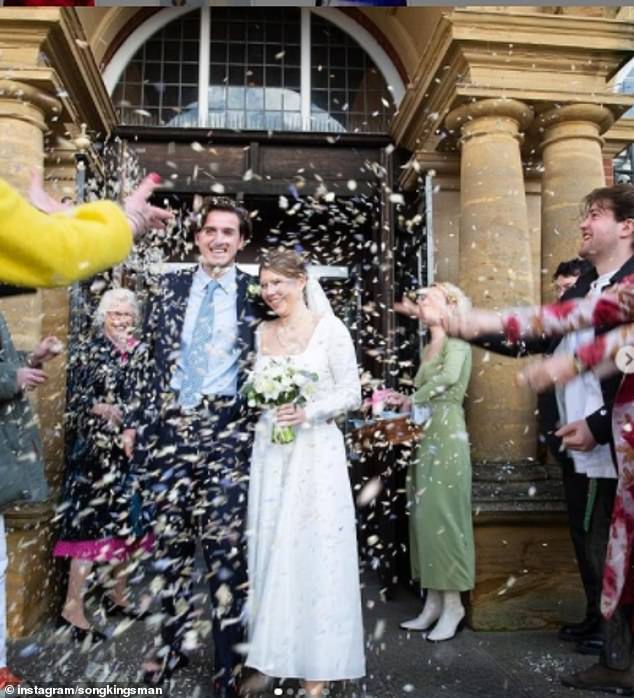 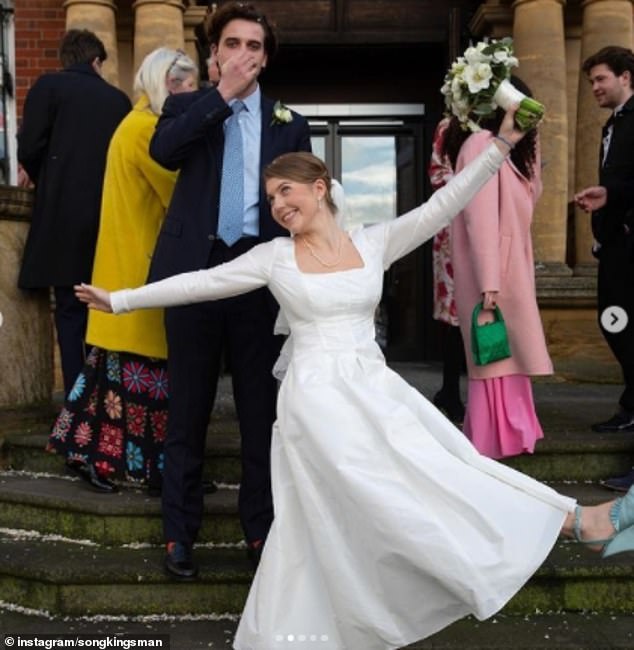 The Conrans were joined by the groom’s mother and brother and friends who introduced Coco and Alex.

Sharing a photo on Instagram, proud newlywed Alex wrote: ‘I married the most wonderful person, Coco, in a magical covid-safe ceremony in the English countryside yesterday, with very close family there. I am so happy and grateful, but sorry that more of you could not be with us to celebrate.’

Alex and Coco became engaged in May and had planned a wedding in May 2021 but decided to bring the date forward and scale back their plans in light of the pandemic restrictions.

Speaking to Tatler, Coco said: ”The whole day was totally magical from beginning to end and I wouldn’t change one single thing. 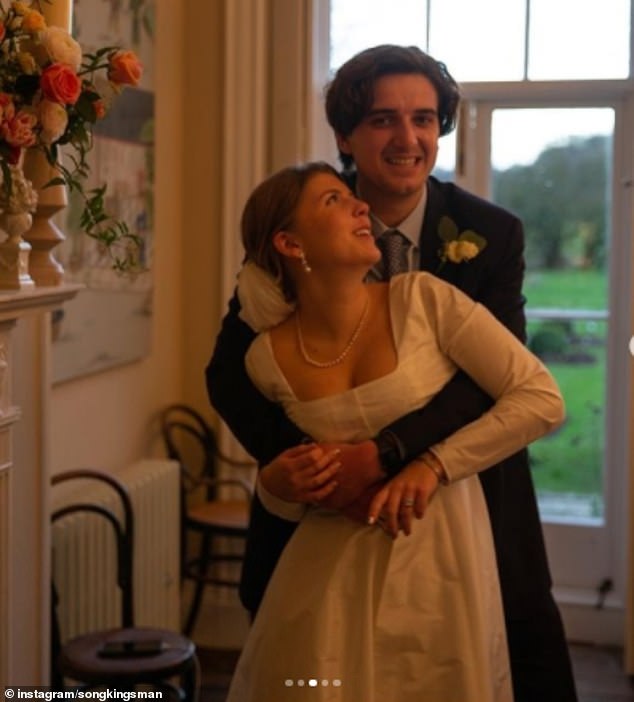 In snaps shared by Coco’s sister Song, the couple appeared overjoyed, cuddling up for photographs at their Wiltshire venue

‘What was particularly lovely about having a smaller scale wedding was being surrounded by people we care so deeply about and having so much time to spend with them individually on the day.’

The bride designed her own dress, creating one with her signature square neckline, and complete with a matching jacket and trousers hidden under the skirt.

Meanwhile Coco’s sibling Song Willcock wore a similar design in a bright pink colour, while another donned a gown in a forest green fabric.

Song shared a selection of snaps online, posting: ‘Congratulations to the most beautiful Coco and Alex!’ 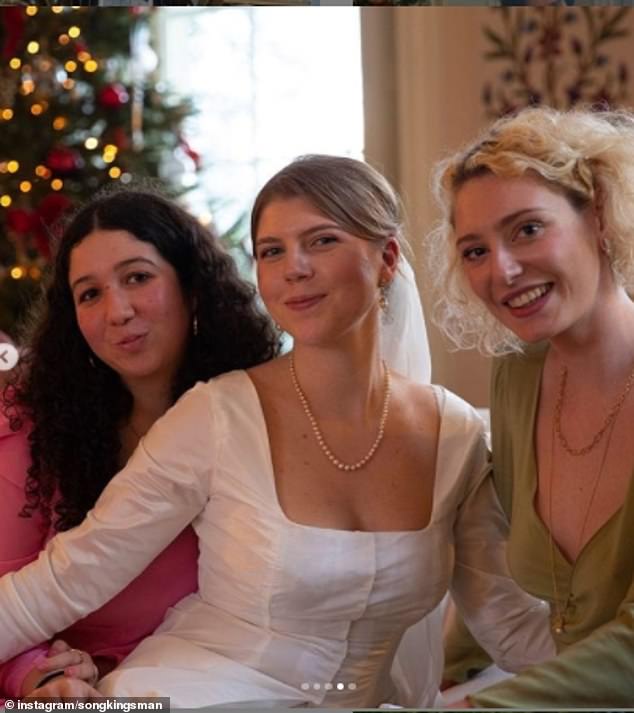 In another photograph taken at the reception of the wedding, Coco posed with a friend and her sister Song 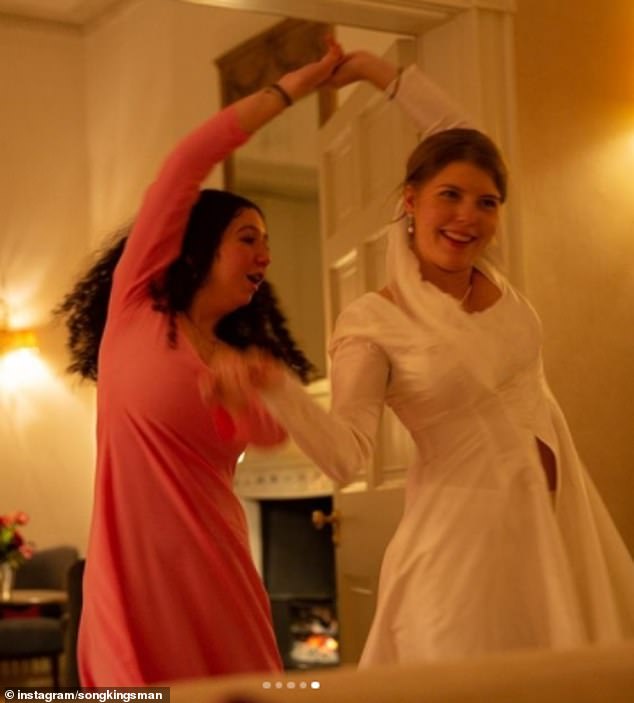 In one of the images, Coco appeared to dance across the steps of the building with joy while in another, they were covered in confetti by playful guests.

The entire wedding was a family affair, with Coco’s uncle Tom providing oysters from his pub The Cow, in West London, while mother-of-the-bride Sophie hosted the reception at her Wiltshire home.

Coco’s wedding ring was the one used by her mother when she married. Alex also toasted Coco’s late grandfather Sir Terence in his speech.

Sir Terence, best known as the founder of Habitat, died in September aged 88. 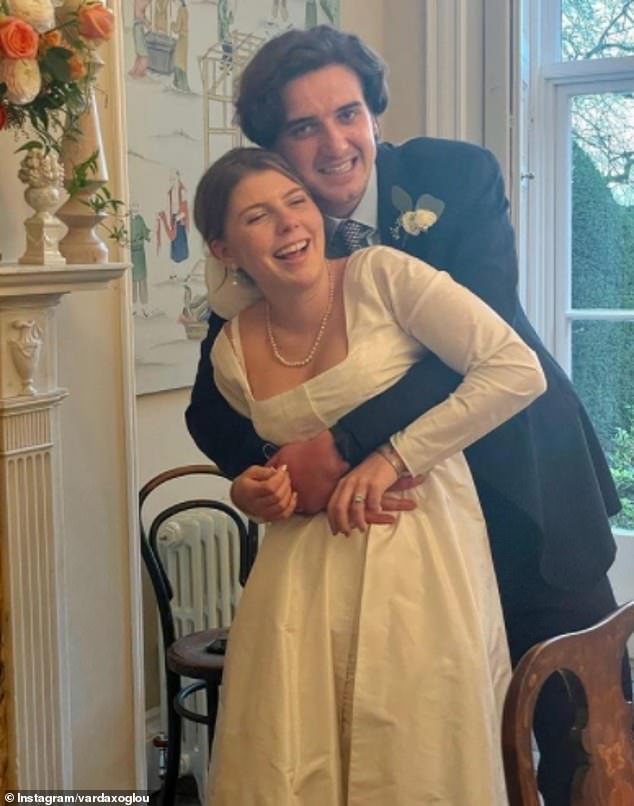 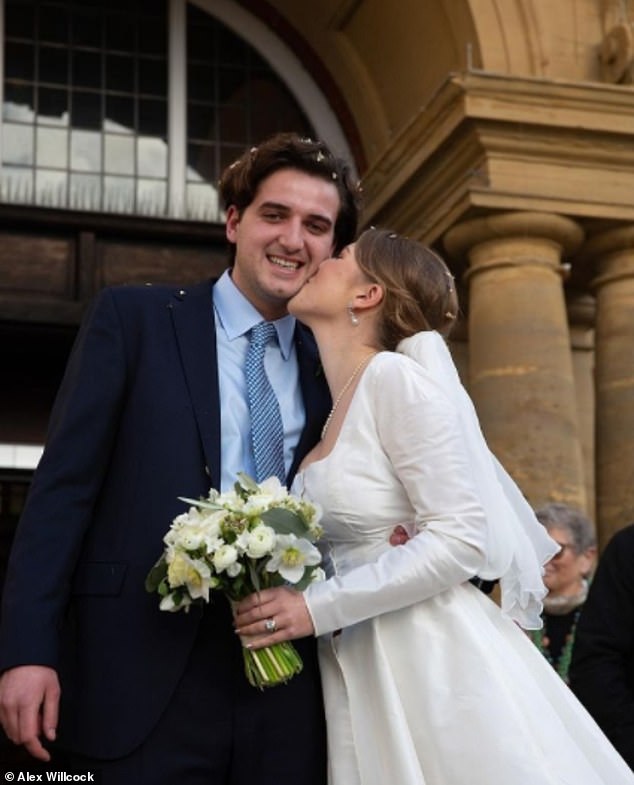 Sealed with a kiss: The bride designed her own dress, creating one with her signature square neckline, and complete with a matching jacket and trousers hidden under the skirt. Coco shared this photo taken by her father to mark the occasion