South Korean President Moon Jae-in has insisted his visit to Australia has nothing to do with China despite enhancing defence ties with Canberra amid increasing tensions with Beijing. 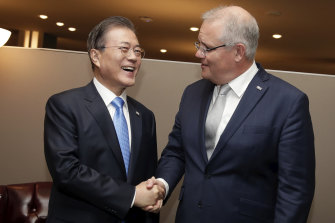 “We will continue to cooperate with Australia for peace in this region,” Mr Moon said.

“The state visit I make at this time has nothing to do with our position over China.”

South Korea recently adopted a more cautious approach than neighbouring Japan to China because of its reliance on Beijing to negotiate a peace deal with North Korea. This has sparked fears Asia’s fourth-largest economy is being left behind by the members of the Quad grouping of Australia, the United States, India and Japan.

But Mr Moon backed in the Quad and AUKUS defence pact Australia signed with Britain and the US to help it build a fleet of nuclear-powered submarines, saying both groups had the potential to maintain “peace and prosperity” in the Indo-Pacific.

Countries throughout the region are growing increasingly concerned about escalating tensions in the region including in the Taiwan Strait and the South China Sea.

Australia and South Korea have both been hit by Chinese trade strikes in recent years.

Beijing has imposed more than $20 billion of tariffs and other trading measures on Australia over the past 18 months in response to the federal government’s push for an independent inquiry into the origins of COVID-19 as well as other national security decisions. China hit South Korea with trade strikes in 2017 over the deployment of a US missile defence system.

Asked about how countries should deal with China’s economic coercion, Mr Moon said South Korea and Australia upheld the “same values and on our position in terms of the geopolitical situation, we are like-minded”.

Mr Moon said his nation’s alliance with the US was the “basis of our diplomacy” and “security affairs” and its the relationship with China was “important”.

But, he said, South Korea also had to take into account “peace and security on the Korean Peninsula” and the “de-nuclearisation” of North Korea”.

“We need the constructive efforts of China to enable de-nuclearisation of DPRK. Therefore, Korea is focused on the steadfast alliance with the US and also with China,” he said.

“And, of course, with regard to the relationship with China, there may be certain conflicts and there may be some issues of competition. However, if you look at climate change and the supply chain issue and also in terms of pandemic and infectious diseases, there are global challenges, and these are domains where we do need to engage in cooperation and collaboration.”

Mr Moon also confirmed his government was not considering following Australia, the US, Britain and Canada in imposing a diplomatic boycott of the Beijing Winter Olympics, to be held in February.

There has been growing concern about tensions in the Taiwan Strait where Chinese military aircraft this year increased their incursions into Taiwan’s air defence identification zone. Defence Minister Peter Dutton last month said if the US committed forces to defend Taiwan, it would be “inconceivable” that Australia would not join in.

Mr Moon said maintaining stability in the Taiwan Strait was “critical if we also want the peace and security on the Korean Peninsula, and it is closely related”.

Mr Morrison said South Korea had a “very important role to play” in calming tensions in the Taiwan Strait.

“It does have its own unique standing within the region and its own relationships with each of the key principles that are engaged in that issue,” he said.

“Equally, Korea also has a very strong and open dialogue with China.”

Hanwha is also vying for a $30 billion contract to build new infantry fighting ­vehicles for the Australian Army.

The two leaders also finalised an agreement to create an Armoured Vehicle Centre of Excellence in Geelong, and elevated their ties to the status of a Comprehensive Strategic Partnership.