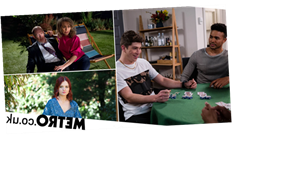 Danger is the word on the street in Neighbours this week as many of the locals find themselves in some very tricky situations. There will be injuries, addiction, and someone making a bad decision over a saucey video. Yikes!

Terese (Rebekah Elmaloglou) is hospitalised over a dreadful mistake made by Hendrix (Benny Turland), will she be ok?

Speaking of Hendrix, he jumps from one disaster to another when he and Jay (Dhruv Malge) decide to run a con on a game of blackjack. But they’ve bitten off more than they can chew when they face off against an old Ramsay Street nemesis.

Pregnant Nicolette (Charlotte Chimes) finds herself in a terrible situation when the son of the man she stole from comes back for revenge, and he makes an offer she just has to refuse – but will she?

The danger continues elsewhere when Sheila (Colette Mann) finds herself in danger of a broken heart thanks to her ex, and Roxy (Zima Anderson) is in danger of making a wally of herself by recording yet another sexy vid for Kyle (Chris Milligan).

Here’s what’s ahead in Neighbours.

Thanks to Hendrix being distracted at work, he causes a terrible accident that leaves Terese injured – she comes a cropper of the steam press that Hendrix managed to damage. She’s rushed to hospital and everyone’s very worried, but David declares all she needs is fluids and rest. Beside himself with guilt, Hendrix tells Harlow he thinks he caused the accident, and he quits.

Amy forced to reveal the truth about deception

Amy is worried she hasn’t done enough to secure the deal to design the Lassiters uniform, so she goes all out, arriving at Paul’s door with flowers for Terese after her accident. He’s unamused, thinking she’s overstepped the mark, but he sort of likes her tenacity and can’t hide it – he tells her she’s now his front runner, which is exactly what Amy wants to hear. And later, she wins gold when Terese awards her the contract. But as things start gathering speed, with Ned modelling the uniforms for a photoshoot, Amy’s guilty secret is eating away at her. She turns to new pal Shane and drops a huge confession on him – she’s a phoney.

David is still being off with Nicolette and she’s struggling to come up with ways to appease him, while Aaron is growing concerned over the divide between him and his husband. Nicolette decides she needs to do some making up to prove she’s not the terrible person they think she is. She decides to face Ricardo, son of the man she stole from, and he most definitely wants what he’s owed, and more. Ricardo tells her he wants the money, no big surprise, so she resolves to get a job and earn it back. She has a little resistance from Dipi, but eventually gets the job at Harold’s. But money isn’t enough for Ricardo, and he offers her a way to pay off her debt that would involve her providing a service more than is required of a waitress. Nic is horrified, but could she consider sleeping with him to get him off her back?

Hendrix and Jay want a quick and serious buck so they devise a risky little strategy for their blackjack games – Jay will count the cards and give signals to Hendrix. What can go wrong? Hendrix has a gut feeling it’s probably not a good idea, but he decides not to listen to it and Jay looks for a private game for them to join to put their con into practice. They find one and join, but little do they know it’s being run by an old enemy of Erinsborough and they are about to get more than they bargained for.

Sheila for heartbreak as Clive moves on with Jane

Jane and Clive feel a little bit uneasy about their romp between the sheets, especially as Sheila is leaning on Jane to help her find out why Clive doesn’t seem to be into her anymore. Feeling like she can’t say no, Jane agrees. But She’s got herself in a pickle as she’s enjoying the chemistry with Clive and the couple decide they want to take things forward. Sheila is, however, unfortunately convinced that a dinner with Clive means the odds are in her favour when really he’s about to break her heart. Jane starts to get a little paranoid about Clive and wonders if she is making the right move, that is until a talk with Roxy shows her she needs to find out where this could lead.

Roxy might be dishing out the love advice and telling Jane not to be so paranoid, but things aren’t going so swimmingly for herself. In fact, the paranoia is definitely starting to creep in. She sends Kyle a sexy video, but he doesn’t reply. Alarm bells are ringing. Roxy fears this means he’s getting it back on with Georgia so she decides to make another sexy video for him. She probably should quit while she’s ahead, but nope she decides a naughty vid is the way to go. Is she about to get her heartbroken too?