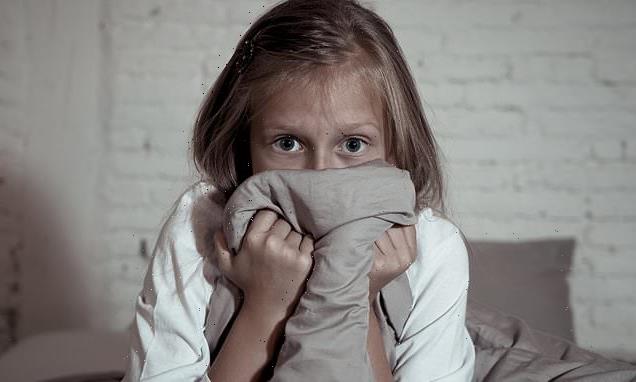 ‘Daddy, I’ve had a past life!’ Parents share VERY creepy stories of children who claim they’ve been reincarnated – from a boy who says he was a soldier to a girl who claims she died in a car crash

Halloween is a long way off yet, but it hasn’t stopped parents from sharing spooky stories about their children.

British father Dan Schreiber took to Twitter to reveal that his three-year-old child calmly told him they had a family ‘a long time ago’ – and even came up with a selection of names.

After the spooked father posted the story online, it wasn’t long before other parents came forward with similar tales – including one who said her three-year-old daughter often pointed out photos of her great-grandmother saying, ‘that’s me.’

Another child creeped out a taxi driver when he claimed a Claire’s Accessories shop they were driving by used to be a pet shop that he’d visit – and the driver confirmed that it was indeed, true. 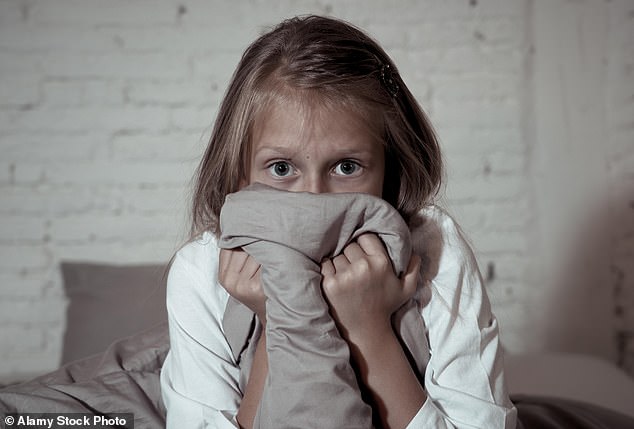 British father Dan Schreiber took to Twitter to reveal that his three-year-old child calmly told him they had a family ‘a long time ago’ – and even came up with a selection of names.

British dad Dan Schreiber revealed his three-year-old said she used to have another family and be named Anke. Other parents shared similar stories they heard from their children

Kickstarting the thread online, Dan Schreiber penned: ‘Interesting bedtime chat with my 3 year old tonight: “daddy, I had a family a long time ago & my mummy was called Sochi & I was called Anke but then I died & now I’m with your family.’

‘Anyway, if anyone needs me, I’ll be up cleaning the pants I just s*** for the rest of the night.’

Soon, other parents shared their equally as spooky  stories about their children’s alleged past lives.

‘My niece saw some archive footage of the miners strike ‘battles’ when she was about 3, 20 odd years ago. She got hysterical and when her mum calmed her down she explained that’s where she died “last time” by a blow to the head. She described her other mummy in detail too,’ one person wrote.

A second commented: ‘Very similar conversations when my son was very young. He used to say “when I was Andrei… ” – then one day, he was watching the cartoon Anastasia, and pointed calmly and said “There – that’s where I lived when I was Andrei” Kids are spooky.’

Meanwhile, a third recalled: ‘We nicknamed our daughter “spooky” as she talked about two previous lives between the ages 3 and 5.’

‘After we had a car accident in which no one was hurt, she remained totally calm saying her friend had told her it would happen and that we would be fine.’

In a case that hit close to home, a toddler claimed he was the reincarnation of their mother’s grandmother. 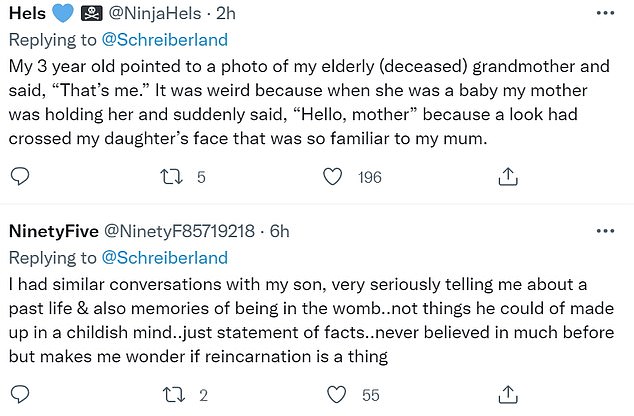 ‘My 3 year old pointed to a photo of my elderly (deceased) grandmother and said, “That’s me.” It was weird because when she was a baby my mother was holding her and suddenly said, “Hello, mother” because a look had crossed my daughter’s face that was so familiar to her mum,’ the mother wrote.

Another parent, who recalled her son telling her of a past life and his memories of being in the womb, said she’s never believed in much before but added it makes her ‘wonder if reincarnation is a thing.’

A third remembered back to when her son was little and never liked his toenails being trimmed.

‘Used to go grey and physically shake. Proper panic attack. He said it’s because when he was a soldier he had his toenails pulled off,’ she wrote.’

Elsewhere, another explained: ‘My mum and sister were in a taxi with my nephew when he was about 3. He pointed at a branch of Claire’s Accessories and said, “when I was a big boy & I was a fireman I used to go in that pet shop.” Elderly taxi driver almost crashed. Said it had been a pet shop when he was a kid.’

While some children spooked their parents with ‘memories of their past lives,’ others said they experienced paranormal occurrences at night.

‘A few years ago my then three year old was struggling with a bad dream. I went to her to stroke her head and calm her down and she was half awake already and she whispered: “Daddy, when the night babies come, I take the hearts from inside their bones so they can’t bite anymore,”,’ one father wrote.

A second told how his son used to tell him about “the wobbly daddy” that used to come in his room at night.’

Elsewhere, a third wore: ‘My now 6 year old used to regularly wake up around the age of 3 and be terrified of ‘the monster on the ceiling’. Staring over our shoulders in horror while we tried to calm him down. Always at the same point in the room. Bloody terrifying.’

Another added: ‘My toddler used to be woken regularly by “the crying man and the angry lady”, who didn’t pay any notice to him, but woke him with their fighting. On a visit to the local museum, we learned that his bedroom sat very precisely on the site of the town’s old debtor’s jail.’