After 18 months of scandals, Catholic boys’ college St Kevin’s has appointed its first female principal in its 102-year history.

Deborah Barker, who is currently principal of girls' school Santa Maria College in Northcote, starts her new job on January 1. 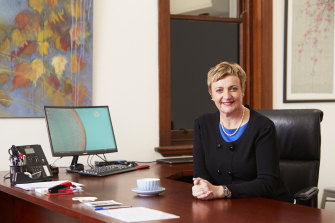 Deborah Barker has been appointed Principal of St Kevin’s College from January 1, 2021.

The statement announcing the appointment, from Edmund Rice Education Australia, which runs the exclusive Toorak secondary school, does not mention she is the first female to assume the post, but a spokesman confirmed she was.

The appointment of Ms Barker, who declined to be interviewed on Monday, comes after a turbulent 18 months for St Kevin’s, which has been linked to a string of scandals and alleged sexism.

In October last year, a group of St Kevin’s students were condemned as misogynistic for singing a salacious chant, about women, on a tram.

In March, five St Kevin's staff left the school amid a child grooming scandal. They included former principal Stephen Russell and head of sport Luke Travers, who had given court references for athletics coach and convicted child groomer Peter Kehoe.

The statement announcing Mrs Barker’s appointment does not mention the school’s troubles.

Edmund Rice Education Australia board chair Mrs Bobby Court thanked John Crowley, who has been acting principal since February, ‘‘for the courageous leadership he has provided throughout this year".

Mr Crowley, who didn’t apply for the principal job, said of Mrs Barker that he was ‘‘thrilled with the appointment of such a high-quality and innovative educator to the role of Principal of St Kevin’s’’.

Mrs Barker said in the statement that she felt privileged to take up ‘‘this significant role’’ and it was a school with a proud history of excellence across a range of academic, cultural and sporting pursuits.

‘‘Deborah is well known as an accomplished lead educator dedicated to the highest standards of learning outcomes and the unconditional support of a safe and inclusive community for each student in her care.

‘‘She is well known to many in Catholic education in Victoria and comes to us with the highest recommendation of her colleagues.’’ Ms Barker was also ‘‘a deeply committed person of faith and will bring her authentic faith witness to the role of spiritual leader and community builder at St Kevin’s’’.