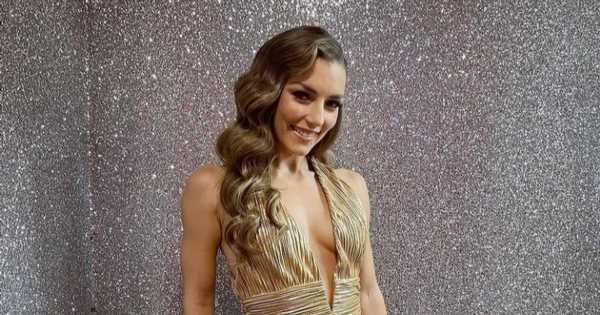 With Strictly Come Dancing back on our screens, a whole new host of celebrities are getting to put their dance moves to the test in a bid to get their hands on the famous Glitterball Trophy.

While viewers at home may be being introduced to a brand new Strictly cohort, which is full of celebs from the world of acting and sport, it’s not just the contestants who will be saying hello to the BBC ballroom.

In fact, this year the show has the biggest professional line-up in its history, with 20 pros taking to our screens.

And one person returning to the Strictly floor is Jowita Przystal, who is paired with wildlife cameraman Hamza Yassin. But who is she and what do we know about her? Let’s take a peek…

Jowita, 28, was born in Poland where she took an interest in the world of performing and began dancing at the age of 12.

“Never lose that sparkle which makes you unique. Don’t be scared to be different. Love yourself, because you’re beautiful as you are.”

While at a summer dance camp in Krakow in 2013, she met her then-dance partner Michael Danilczuk and the duo went on to represent Poland at various ballroom competitions. In 2014 they were also crowned the Polish Open Latin Champions.

Following their competition success, Jowita and Michael went on to perform on cruise ships and appeared in shows such as Rock of Ages and Legally Blonde.

The pair later entered BBC show The Greatest Dancer and took home the trophy in 2020. As part of their winning prize, the pair were given £50,000 and the opportunity to perform on Strictly.

A year after the competition win saw her take to the Strictly floor, Jowita became a permanent professional dancer on the show in 2021.

While the award-winning dancer was given a pairing on last year’s main show, she did take part in group numbers and even performed a piece while Gregory Porter sang live alongside her partner Cameron Lombard.

Additionally, fans of Strictly will remember the 2021 Christmas Special which saw Jowita dance with presenter and journalist Adrian Chiles.

Elsewhere, Jowita also appeared as part of the Strictly Come Dancing tour and helped bring the programme to arenas up and down the country.