Sun Cable, the energy company backed by billionaires Mike Cannon-Brookes and Andrew “Twiggy” Forrest has scaled up plans for the world’s biggest solar farm by as much as 40 per cent and secured key support from the Indonesian government.

The company announced on Thursday that the size of the Powell Creek Solar Precinct planned for the Northern Territory to supply Darwin and Singapore would now be 17-20 gigawatts (GW) in capacity, up from the previous plan of 14GW. The associated storage system has also been lifted in size to 36-42 GW-hours from an earlier goal of 30GW-hours. 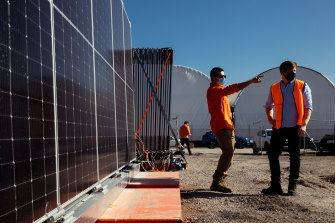 Solar panels developed by Sydney-based 5B could be deployed in Sun Cable’s planned giant solar farm in the Northern Territory to supply Darwin and Singapore with low cost and zero-emissions electricity. Credit:Dominic Lorrimer

In the process, the project’s estimated cost has also increased to about $30 billion, up from $22 billion.

“It’s an important step forward. It’s all driven by some really positive developments from both customer demand and technological enhancements,” David Griffin, chief executive of Sun Cable, told the Herald and The Age, adding that both the solar farm and storage system “will obviously be the largest in the world”.

The release of details about the larger project coincided with Sun Cable also announcing it had secured support from Indonesia for early work on preparing to lay the cable linking Darwin to Singapore to pass through the Indonesian archipelago.

Luhut Binsar Panjaitain, Indonesia’s Co-ordinating Minister for Maritime Affairs and Investment welcomed Sun Cable’s operation in Indonesia and confirmed that his government had granted it a subsea survey permit and recommended the transmission route, according to a statement from Sun Cable.

“Sun Cable is greatly appreciative of the support from the Indonesian government and looks forward to a long-term relationship with Indonesia,” it said.

“As part of building the [Australia-Asia] PowerLink [between Darwin and Singapore], Sun Cable will drive investment and jobs in Indonesia, share knowledge, and support Indonesian manufacturing.”

The project would aim to start supplying Darwin from 2026 and Singapore a year later, with full output reached by 2028.

Sun Cable aims to supply as much as 15 per cent of Singapore’s electricity needs and could reduce Singapore’s emissions by six million tonnes of carbon dioxide-equivalent a year. That would match Singapore’s entire climate abatement gap in its 2030 reduction goals, the company said. 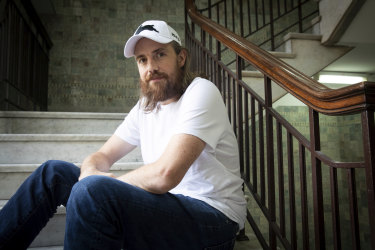 The solar farm will continue to occupy a planned 12,000 hectares despite the increased capacity, including about 28 million solar panels.

Its export capacity would be 2.2GW, or more than four times the current Basslink Interconnector linking Tasmania and mainland Australia. At 4200 kilometres, it would also be more than 10 times as long.

Mr Griffin said more large solar farms were in the works, although the Australia-Asia Powerlink was the “marquee project”.

“The learning rate for solar panels is relentless,” he said. “It is a long way from flattening out yet … It’s not a mature technology. There are still lots of efficiency gains to have.”

Michael Gunner, Northern Territory Chief Minister, said Sun Cable had already employed more than a dozen Darwin firms for initial works. The project would inject some $8 billion into the Australian economy, much of it in the NT.

Sun Cable expects the venture will produce as much as $2 billion a year in exports, create more than 1500 jobs in construction, 350 operational jobs, and 12,000 indirect jobs.