London: Assistant Minister for the Republic Matt Thistlethwaite says requiring Australian MPs to swear allegiance to the Queen is ridiculous and shows why another republic referendum is needed.

The 47th parliament, which was sworn in on Tuesday, is Australia’s most culturally diverse, with more MPs from non-European backgrounds than ever before. 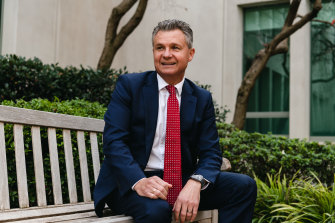 Matt Thistlethwaite says MPs should be pledging to serve the Australian people who elected them and not the British royal family.Credit:James Brickwood

Those born overseas have to relinquish their first citizenship to comply with section 44 of the Constitution, which says anyone who is a citizen or entitled to the rights or privileges of a subject or citizen of a foreign power is incapable of sitting in parliament.

Thistlethwaite said MPs should be pledging to serve the Australian people who elected them and not the British royal family.

“Ironically, under section 44 of the Constitution, you cannot run for parliament if you hold allegiance to another country, yet the first thing we do in parliament is promise to serve a foreign monarch,” he told this masthead.

“It’s archaic and ridiculous. It does not represent the Australia we live in and it’s further evidence of why we need to begin discussing becoming a republic with our own head of state. We are no longer British.”

Section 42 of the Constitution says every senator or member must swear an oath or affirmation to the monarch and their heirs and successors before taking their seat.

Technically, section 42 and the schedule in which the oath is set out could be changed by a referendum without moving to a republic, but it is highly unlikely the government would try to push for this on its own.

Instead, it would be just one of many clauses that would be rewritten if Australia ditched the Queen and her immediate heirs Prince Charles, Prince William and Prince George.

While Thistlethwaite has been appointed Australia’s first-ever assistant minister for the republic, Labor says it will not hold a republic referendum until any second term. It wants to hold a referendum this term asking the Australian people to enshrine an Indigenous Voice into the Constitution.

Thistlethwaite said the document had not been updated since 1977 and it was time for a constitutional refresh, first with recognition of an Indigenous Voice, then a move to a republic.

“We are now a much more mature and independent nation and we should reflect that in the document upon which our democracy and our laws are based,” he said.

Referendums have had limited success in Australia, partly because of the high bar required to approve changes to the Constitution.

Under section 128 of the Constitution, any constitutional amendment must be passed by both houses of parliament. It can then succeed only if approved by a double majority, that is the national majority of the Australian public along with the majority of votes in four of the six states.

Just eight of the 44 referendums in Australia’s history have been approved.

In 1999, 54.87 per cent of voters were against a republic compared to 45.13 per cent nationally. Every state voted no. The ACT, which counts only towards the national total, was the only jurisdiction to vote yes.

A Resolve Political Monitor survey for this masthead in January found that 36 per cent of voters were in favour of a republic, 38 per cent neutral and 27 per cent against.

29/07/2022 Lifestyle Comments Off on Swearing allegiance to the Queen ‘ridiculous’: Republic minister
Lifestyle