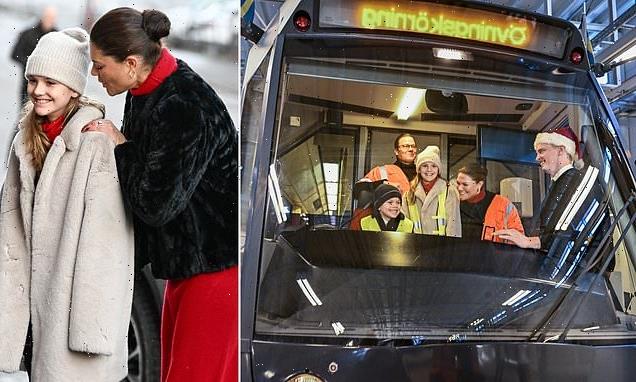 All aboard! Princess Estelle and Prince Oscar of Sweden steal the show as they visit a local traffic depot with their parents on Christmas Eve

Crown Princess Victoria of Sweden packed one last engagement with her family before tonight’s Christmas Eve’s celebrations this morning.

The dedicated royal, 45, visited a local traffic depot in Ulvsunda, near Stockholm, with her husband, Prince Daniel, 49, and their two children, Princess Estelle, ten, and Prince Oscar, six.

For the festive occasion, stylish Victoria wore a red turtleneck with a matching skirt and paired it with trendy black boots. 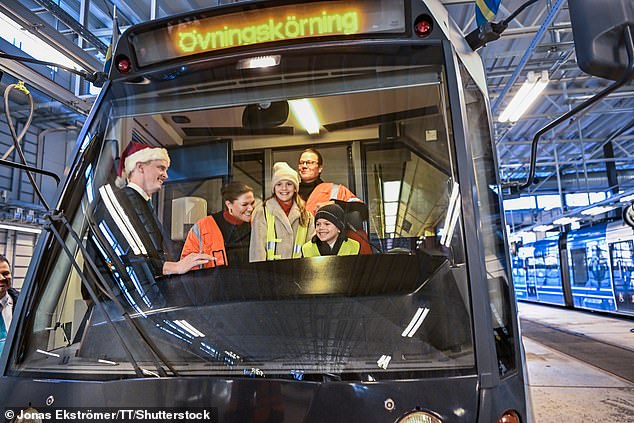 The dedicated Crown Princess of Sweden 45, visited a local traffic depot in Ulvsunda, near Stockholm, with her husband, Prince Daniel, 49, and their two children, Princess Estelle, ten and Prince Oscar, six

Victoria cut a relaxed figure this morning as she arrived at the local depot in a loose fitting skirt and matching sweater she paired with the black boots.

Her hair was styled in a sleek tight bun, and she accessorised with a discreet pair of golden hoop earrings.

The mother-of-two sported a minimal day makeup, with some bronzer highlighting her natural healthy glow.

She added a dash of mascara and a trait of eyeliner to her eyes, and kept her lips nude for the occasion. 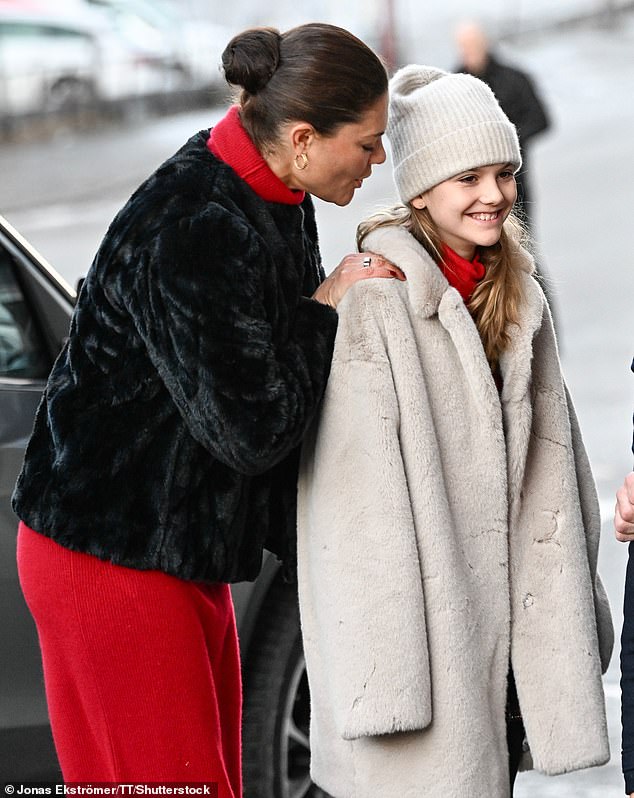 Princess Estelle wrapped up in a cream coat with a matching hat for today’s engagement, while her mother wore a short black fur coat

Meanwhile, Prince Daniel looked dapper in an all black look consisting of a blaser he wore over a stylish turtleneck, with black trainers.

The couple’s children stole the show as they accompanied them on the visit.

Estelle, the eldest, looked seasonal in a black, red and gold tartan skirt, which she paired with a similar red turtleneck top as her mother.

Her blonde locks were styled straight and cascaded down her shoulders and she accessorised with a pair of stud diamond earrings. 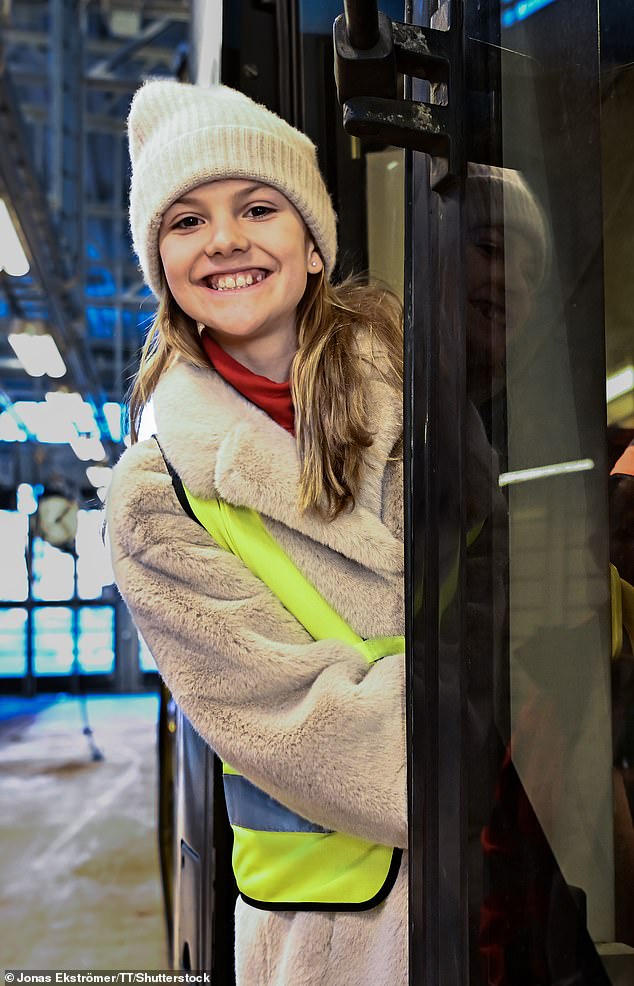 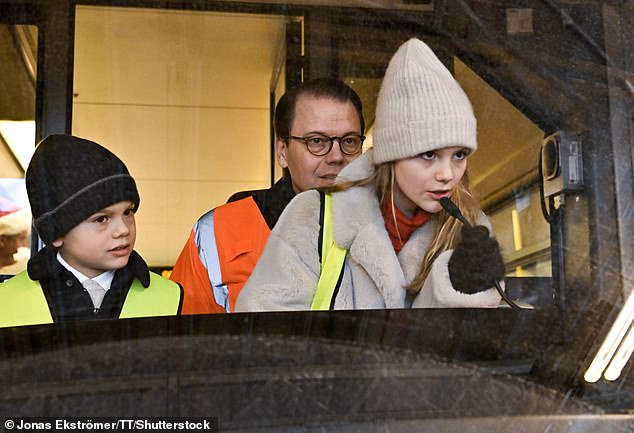 Oscar, left, and Estelle got to play bus conductors during the visit, under the close supervision of Prince Daniel 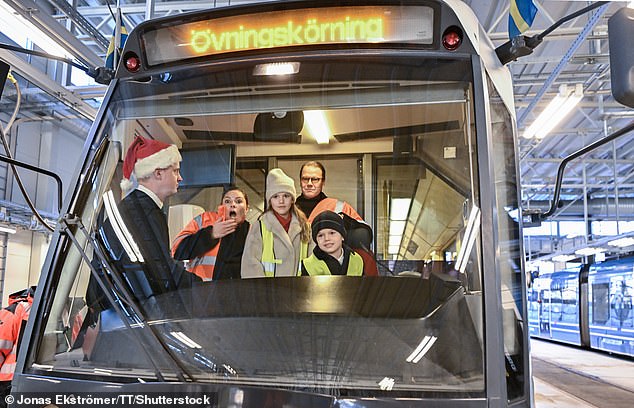 All aboard! Prince Oscar got to sit behind the wheel and pretended he was driving, with Crown Princess Victoria playing along 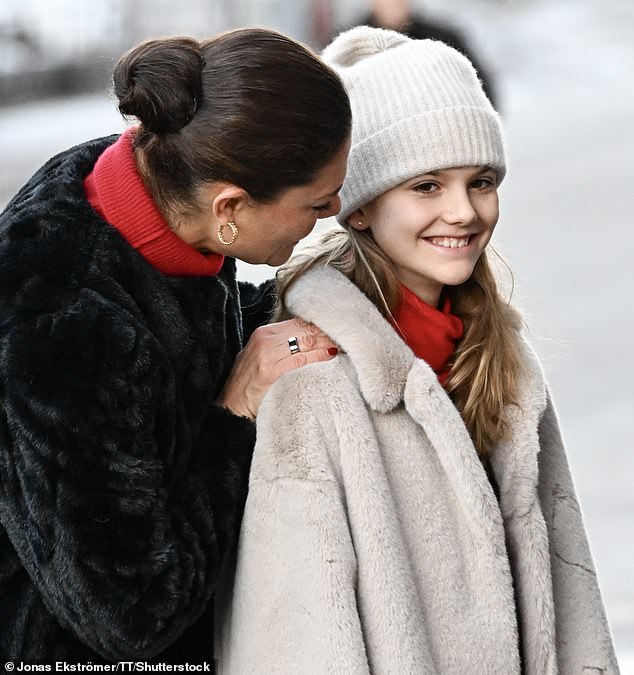 Meanwhile, her brother Oscar looked very smart in a beige sweater he wore over a crisp white shirt, with dark blue jeans and black trainers.

His hair was fixed with a dollop of gel and parted in the middle, giving the young royal a sleek look.

The royal family toured the depot and learned more about how it worked, before meeting with the employees who will be making sure Stockholm public transport is running smoothly throughout the festive period, Per-Erik Selking, Anne-Christine Vuoristo, Eric Wibing, Mirzad Smajlovic, Petrus Sarmento. 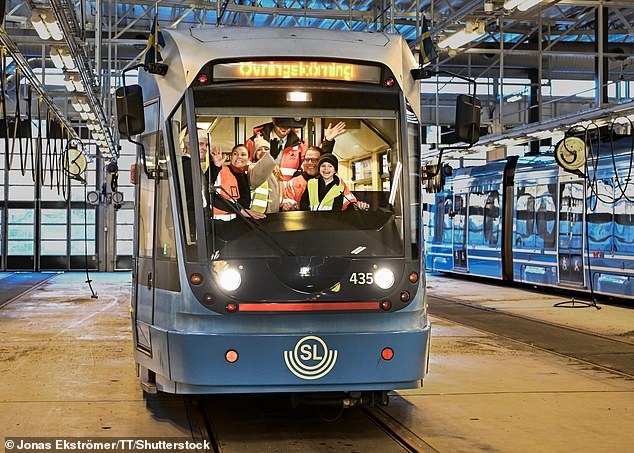 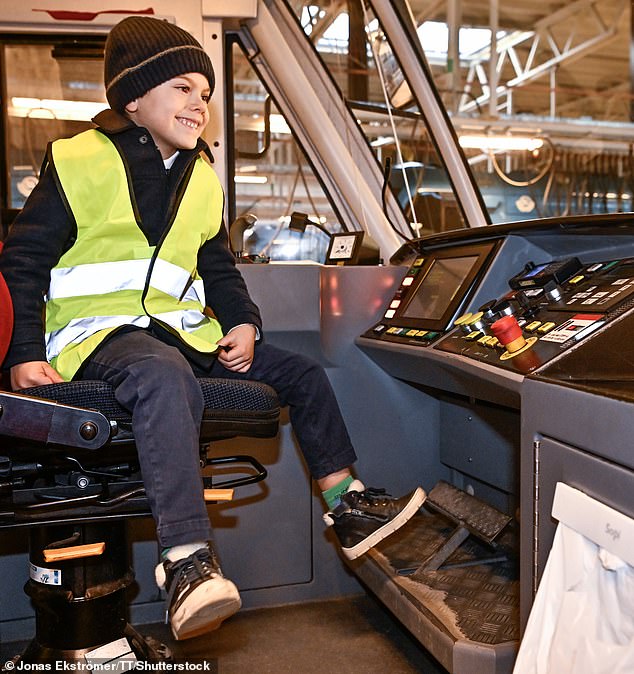 Prince Oscar, dressed in navy jeans and wrapped up in a black coat and beanie, looked pleased with the family outing

During the tour, the young royals got to sit behind the wheels of some of the machinery at the depot.

Victoria wrapped up in a short black fur coat, while Estelle donned an adorable cream fur coat and matching hat.

The Swedish royal family have been multiplying engagements this week in the run up to Christmas Day tomorrow.

Victoria put her best fashion foot forward in a statement purple gown, featuring an elegant round neck and long sleeves as she attended the Swedish Academy’s annual ceremony at the Old Stock Exchange building in Stockholm on Tuesday. 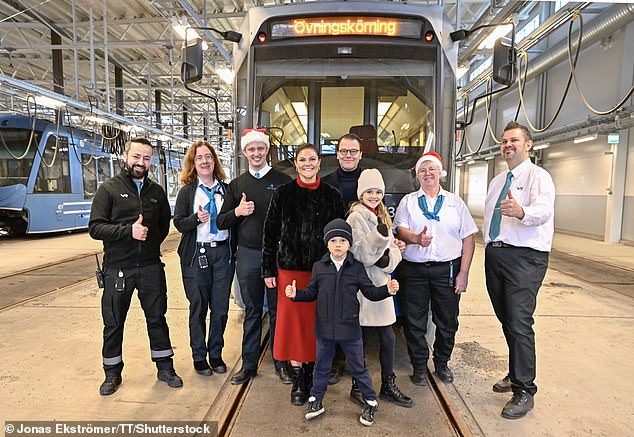 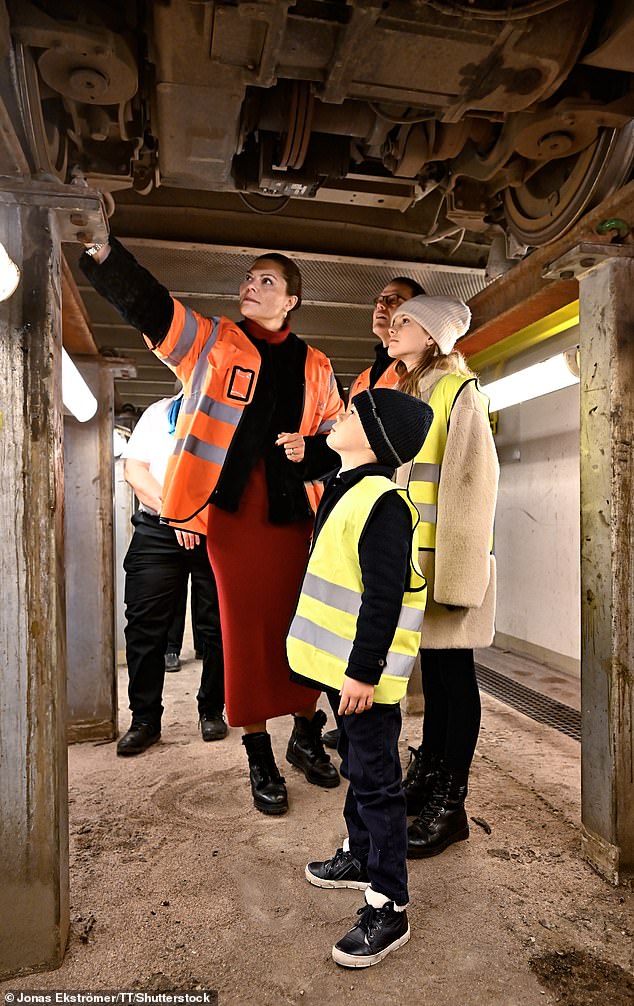 Victoria, who paired her stylish red outfit with comfortable boots, took a closer look at the depot during the visit

She dazzled in the form-hugging plum gown, which espoused her slender silhouette.

On the dress, she was wearing her royal sash and her honours, pinned to the outfit with a blue ribbon. 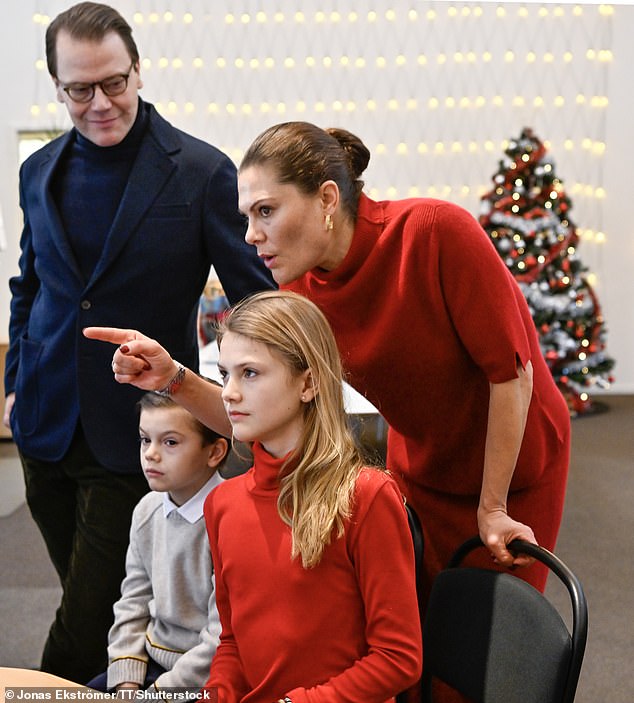 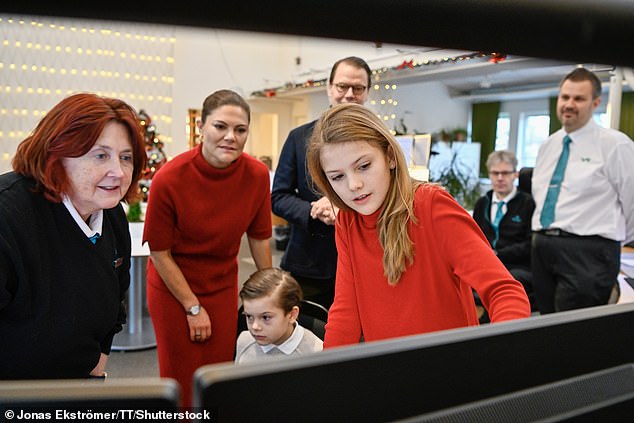 Traffic controller Anne-Christine Vuoristo, left, was there to answer all the questions of the young royals 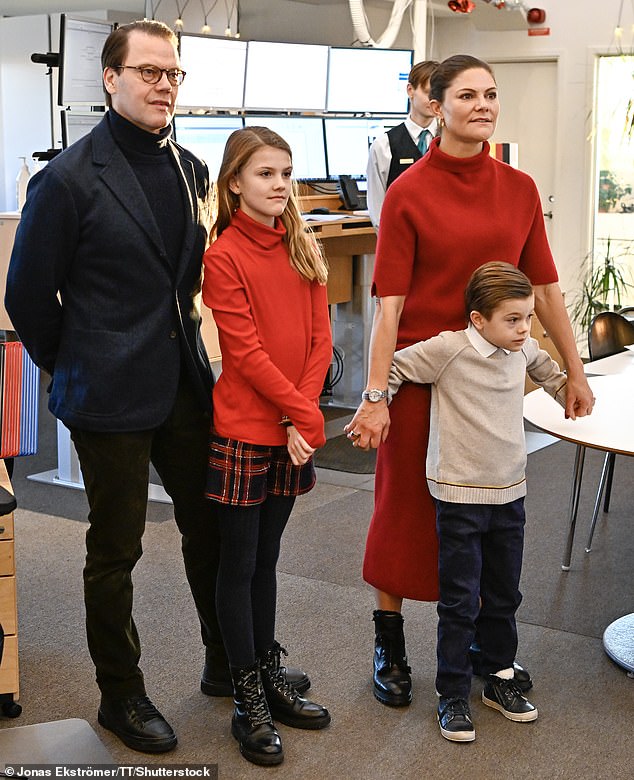 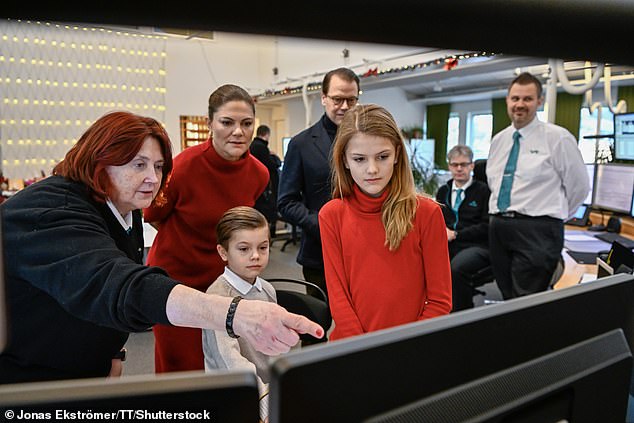 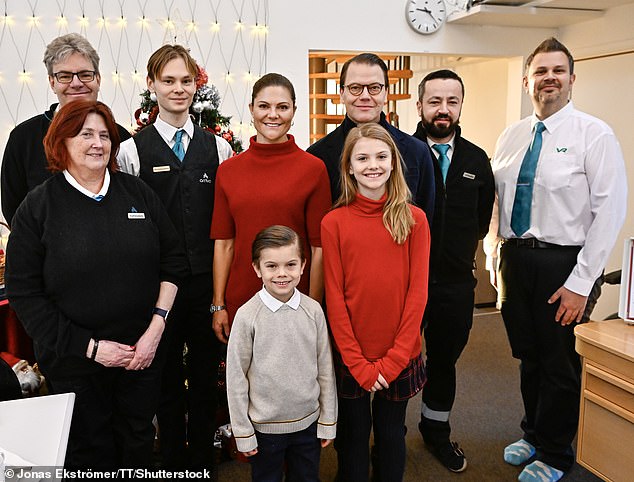 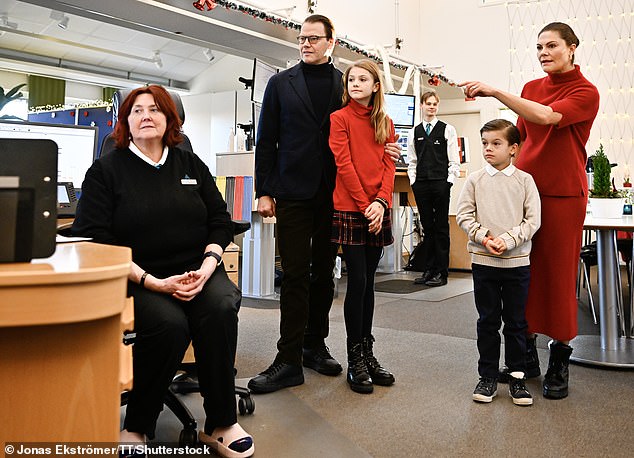 Prince Daniel and Prince Oscar both looked very dapper today, while Princess Estelle looked sweet in her tartan skirt and red turtleneck that matched her mother’s

Meanwhile, on Wednesday, her brother, Prince Carl Philip, and his wife Princess Sofia attending the annual Christmas in Vasastan concert in Stockholm.

The mother-of-three, 38, dazzled in a navy gown, embellished with glittering floral detailing when Looking as stylish as ever, Sofia commanded attention in her statement dress, which she teamed with matching navy heels and a coordinating velvet clutch.

The brunette beauty arrived arm-in-arm with her husband Prince Carl Philip, 43, who is the second child of King Carl XVI Gustaf of Sweden and Queen Silvia.

All the times Prince Louis stole the show in 2022! SIOFRA BRENNAN’S video breakdown of the cheeky young royal’s big year – from refusing to hold William’s hand to pulling faces at the Platinum Jubilee

The King’s most poignant speech: Monarch nods to his late mother the Queen by recording Christmas message in St George’s Chapel where the world was afforded a last glimpse of her coffin