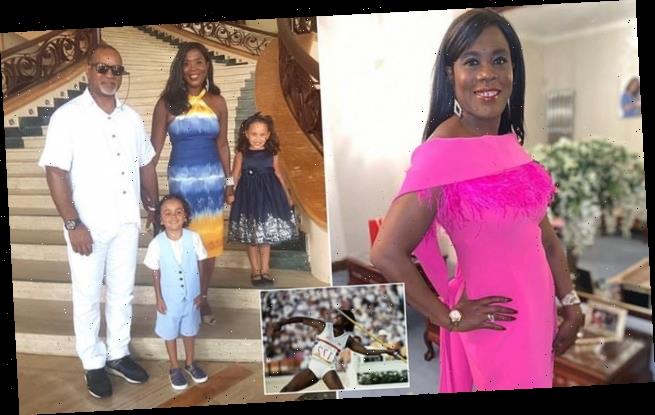 Olympian Tessa Sanderson, 65, reveals she has talked to her eight-year-old twins about racism and their adoption to prepare them for ‘hurtful’ comments in the future

British Olympian Tessa Sanderson has revealed she sat down her eight-year-old twins to explain the Black Lives Matter protests because she is aware they may suffer racist abuse in the future.

The sportswoman, 65, adopted brother and sister Cassius and Ruby Mae seven years ago when they were four months old and she was 58.

They are mixed race, with Irish and Jamaican heritage, and were severely ill initially because their parents were drug users.

Tessa said she made sure that she explained their ethnicity to them because she is aware people might make cruel comments related to their heritage in the future. 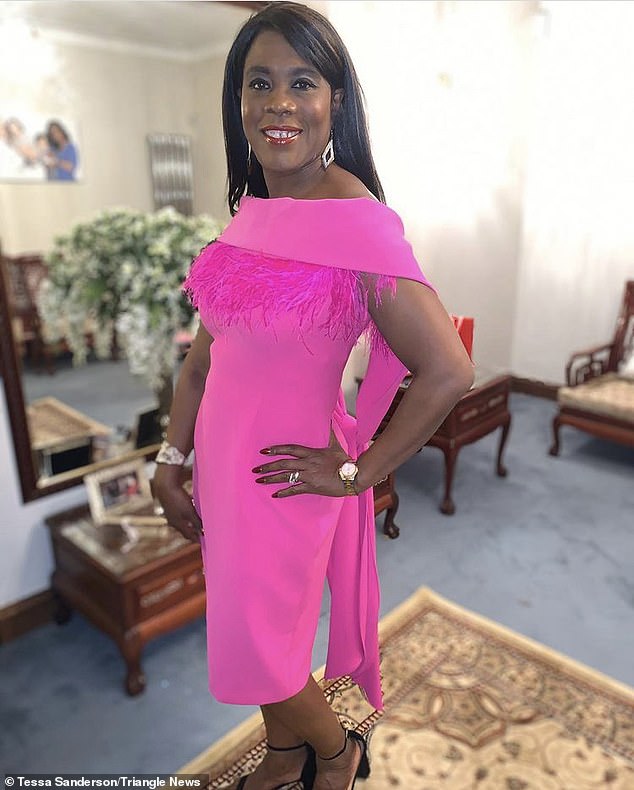 British Olympian Tessa Sanderson, 65, has revealed that she has sat her eight-year-old twins down and explained racism and the Black Lives Matter protests to them

Tessa, a six-time Olympic javelin star whose career spanned 20 years, said: ‘They do realise that ethnicity can be a problem because they’re darker than a lot of people.

‘We have talked to them about the colour of their skin. And I say, “You know what, if you do get called names and things like that, if it hurts you, come home and talk to Mummy or you talk to your teacher about it.”

‘I’d tell them, “Don’t ever judge people by the colour of their skin” – straight up, like that.’

She went on: ‘When the Black Lives Matter marches were on and they asked, “Why’s that happening Mummy?” and I would explain.

‘We talked about unfairness as well. All this different language is what me and my husband use to our kids to make them understand. 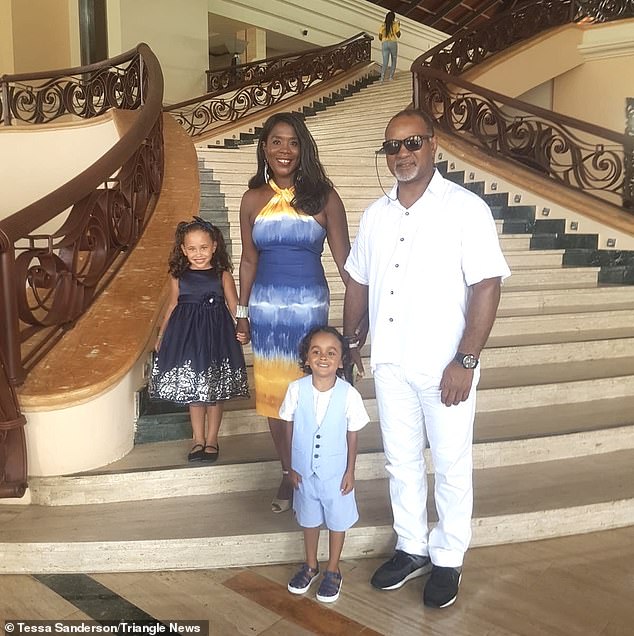 The javelin star and her husband, judo Olympian Densign White, 59, adopted brother and sister Cassius and Ruby Mae, who have Irish and Jamaican heritage, seven years ago when they were four months old

‘We have always taught them that you may get some name-calling, you may get people saying, even about adoption, “Oh they’re not your real mummy and daddy”, they understand all of that.’

Tessa underwent three rounds of failed IVF before the age of 50. She and her husband, judo Olympian Densign White, 59, decided to adopt because Tessa longed to be a mother.

Tessa arrived in Britain as a six-year-old child a year after her Windrush parents left Jamaica to look for work.

The family settled in Wednesfield, West Midlands, and Tessa went on to become the first black British woman to win an Olympic gold after her 69.56-metre javelin triumph at the 1984 games in Los Angeles, US.

She is also the first Briton to represent her country at six Olympic Games and is still the only person, man or woman, to win a throwing gold for GB. 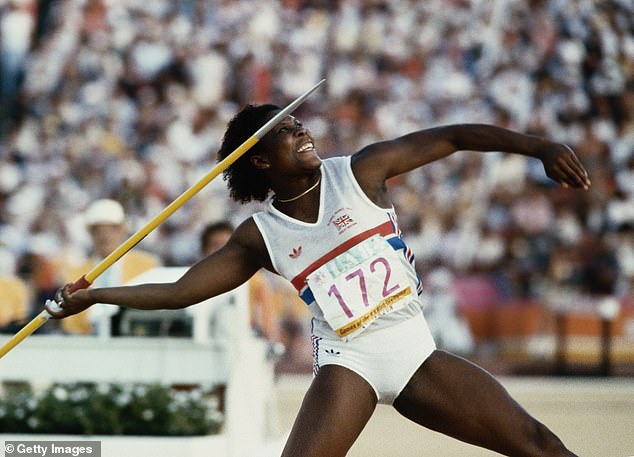 Tessa was the first black British woman to win an Olympic gold after her 69.56-metre javeline triumph at the 1984 games in Los Angeles

She said adopting Cassius and Ruby Mae made her world complete, but the transition hasn’t been without some stresses.

Tessa said someone had already told the twins that she and Densign ‘weren’t their real mum and dad’, but the children were prepared as she had explained that they were adopted when they were four or five years old.

Tessa, who lives in London, said: ‘Somebody said that in the playground, but they were fine because by then they knew about adoption and to them it didn’t matter. Because as far as they’re concerned we are their mummy and daddy.’

She said Cassius had begun reading texts by Martin Luther King and Nelson Mandela, adding: ‘When I talk about racism to my kids it’s not just about being black or white, I have even taken them back to Windrush Days and I said there were things written on the wall that black people were not allowed here and they’d ask, “Well why Mummy?” and I’d say “Well that’s the way some people are, some people can be very hurtful”.

‘I’ve said people should be treated equally, on a level. I’ve said to them that some people just don’t like the colour of other people’s skin and it shouldn’t be like that. 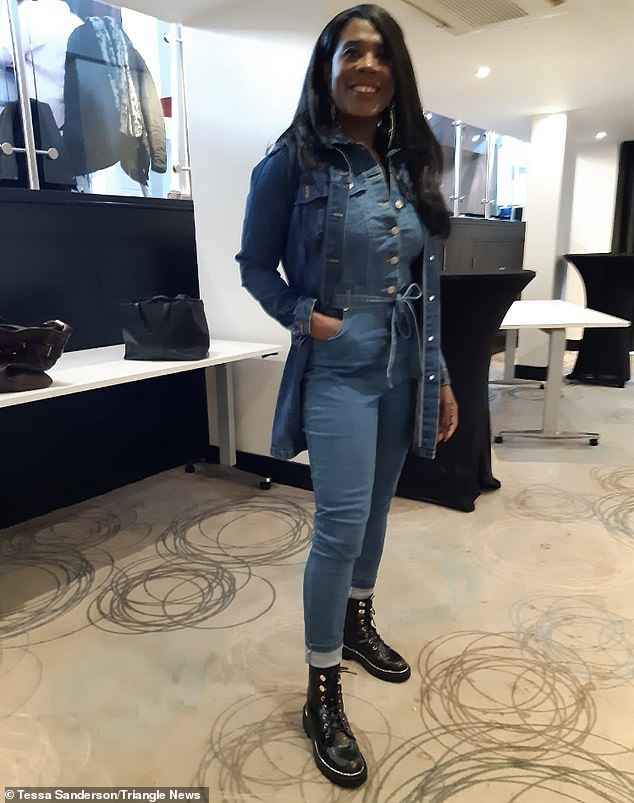 Tessa said said adopting Cassius and Ruby Mae made her world complete, but the transition hasn’t been without some stresses, as a child in the playground told them they weren’t their ‘real parents’, but she had already told the twins about their adoption

‘I said be proud of your skin and be proud of what you do and it has driven home to them, it’s given them the power to realise that they might be a little bit different colour from other people but inside they’re OK.

‘I don’t know in the future if they will have a problem, but what I’m fairly confident about is that they would address that problem in the right way and hopefully they will have the confidence to find the right things to do about it.

‘I tell them I’m proud of being me and you must be proud of being you whatever the consequences. We talk about the hard truth. I say to them that there are a lot of people that are jealous, unkind, don’t want to treat you fairly and this is what happens, but as long as you take onboard your education and your confidence and respect other people’s skin colour then life will be a little bit better.’

Tessa and Densign’s adoption journey also wasn’t easy, as they were turned down for a five-year-old girl before the twins. And when Cassius and Ruby Mae joined their family, they had to have HIV tests due to their parents’ background.

But Tessa says being an older mother has helped her be a better one – and she describes adoption as ‘brilliant’. 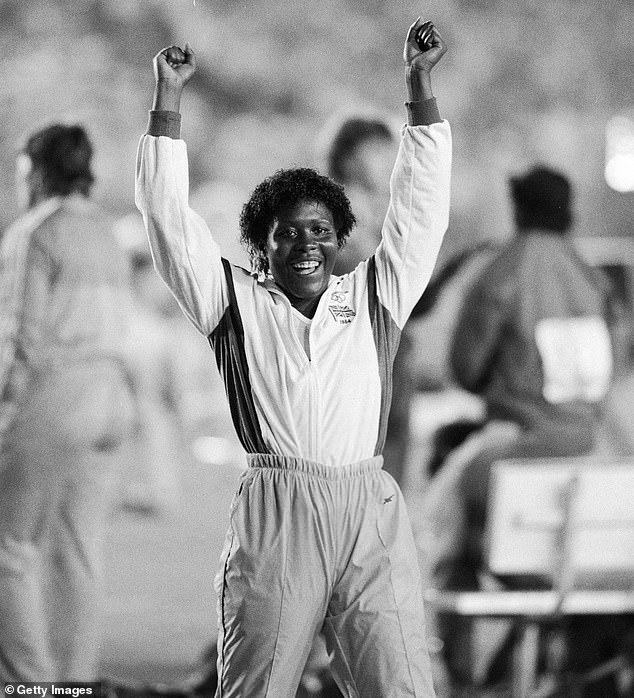 She said being an older mother has helped her to be a better one and is now modelling into her 60s, enjoys motivational speaking and hopes to do more TV presenting in the future (pictured: Tessa winning the gold medal in the Women’s Javelin event in 1984)

She is now modelling into her 60s, enjoys motivational speaking and hopes to do more TV presenting in the future, especially with the Commonwealth Games coming to Birmingham in 2022.

She added: ‘Bringing my children into my word has really made my life complete. I knew I couldn’t have children, there were always children around in my family and I got downhearted.

‘I thought adoption is what I really want to do and it’s brought a lot of happiness to me, even more confidence I’ve got back, it’s made me feel younger. It’s lovely to go forward and create your world.

‘My body’s in good nick, I feel great, my husband is positive so I’ve got the support there, I am healthy enough. Age isn’t a barrier. Do I feel different from 35? Yes of course I bloody do.

‘But I’m a lot more confident even in myself and over 50 started all of that. I jog three times a week, I exercise with my kids when I want to. I really keep myself healthy. I’m not 25 or 35 but I don’t have to be.’