The relationship between pop culture and our society is a symbiotic one. We are what we consume, and what we consume reflects who we are, a beautiful example of crippling co-dependency. But this year, of all years, we have needed pop culture more than it has needed us.

As the pandemic reduced our friends and family to pixelated faces on a phone screen or a Zoom call (or House Party for those who remember when House Party was a thing), pop culture became a life raft to which we could cling.

Pop culture has coaxed out hidden smiles after grim press conferences. It has offered an escape when reality felt too real. It has propped us up when we're oh-so-close to crumbling. And so as we enter the home stretch of this marathon year, the time has come to pay tribute to the moments that helped us crawl across the finish line.

It was back in April (which was 10 years ago, yes?) that JT Firstman posted his first series of Impressions to Instagram. These were not impressions as we've come to expect, no exaggerated Trump voice or Steve Buscemi impersonation. Instead, the LA writer delivered eerily accurate impressions of things we didn't know we needed. Someone ''doing the work", an actor attempting to justify her role in a children's animated film and, my personal favourite, the publicist for banana bread.

No one has benefited more from 2020 than Four Seasons Total Landscaping. This small family-owned gardening business was thrust into the limelight after accidentally hosting Team Trump's now infamous post-election press conference. A far cry from the actual Four Seasons, the internet had a field day with the mix-up, rejoicing as a sweaty Rudy Giuliani spoke to the press while sandwiched between two depressing buildings. Because this is 2020 and because nothing makes sense anymore, Four Seasons Total Landscaping has since become a global phenomenon, and they even sell their own merch. Their Make America Rake Again jumper is a Christmas must-have. 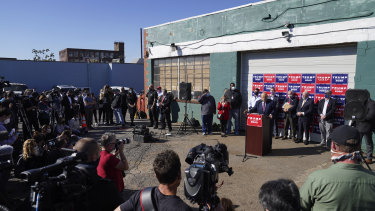 Beyond parody: The Trump administration’s bizarre “Four Seasons” press conference in the car park of a landscaping company in industrial Philadelphia.Credit:AP

The Inspired Unemployed: The battlers we needed

Round of applause for Matt Ford and Jack Steele, AKA The Inspired Unemployed, two best mates from Kiama who reminded us that it's ok to be silly when things feel serious. The pair have built a vast Instagram platform – 800,000 followers and climbing – off the back of their weird-and-wonderful content, but it's their hypnotic dancing videos that deserve a shout out. Dance floors were corona-cancelled across the country, but The Inspired Unemployed bravely kept the boogie alive.

Spare a thought for everyone older than 35 who had to Google what WAP stood for (spoiler alert: it's Wet Ass Pussy). Released in August, Cardi B and Megan Thee Stallion's anthemic ode to female pleasure proved to be a fitting soundtrack for the year. While everyone was stuck inside obsessing about hygiene, WAP was unashamedly dirty, and we couldn't get enough of it. The film clip racked up more than 26 million views in its first 24 hours on YouTube and would go on to inspire a hugely popular dance challenge on TikTok.

"Are you watching anything good lately?" was a redundant question this year as we found ourselves glued to the same programs, each one a reflection of our changing moods. First came Tiger King in mid-March, a stranger-than-fiction documentary series that was just weird enough to distract us from how strange things were becoming in the real world. Who can worry about a pandemic when you're concerned Carole Baskin fed her first husband to a tiger? Next was The Last Dance, which simultaneously hit us with a dose of nostalgia (when stadiums were full of people, not cardboard cut-outs), while also filling the hole left by live sport. Finally, just as we had plummeted to peak-pessimism along came Emily in Paris. Nothing brings people together like hating the same thing, and as the tres-annoying Emily swanned about Paris, we celebrated the best worst show on TV. 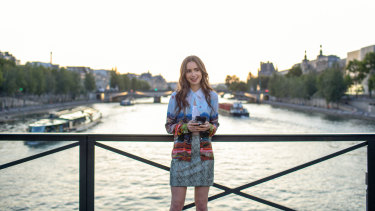 Rule number one of living in Paris: unless you’re a tour guide, do not wear a shirt printed with the Eiffel Tower.

Saluting the The Fly on Mike Pence’s head

This year has offered plenty of heroes: frontline workers, exhausted state Premiers, UberEats drivers. But none deserve more recognition than the Fly that landed on Mike Pence's head during the Vice Presidential debate. Amid a fiery political exchange, the fly was able to cut through the noise and offer us all a welcome distraction. 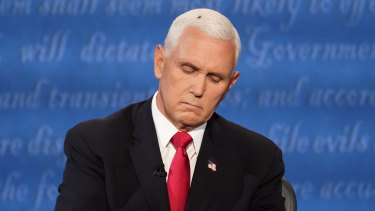 Vice-President Mike Pence and the fly that pulled focus. Credit:AP

Doggface teaches us to dream again

When Nathan Apodaca's car broke down on the way to work, he made a decision that would catapult him into the annals of pop culture history. Rather than order an Uber he hopped on his skateboard and cruised the rest of the way, sipping casually from a giant bottle of Ocean Spray Cranberry Juice. Nathan captured the journey on his iPhone and uploaded it to TikTok – where he posts under the username Doggface – using Fleetwood Mac's Dreams as a backing track. The combination of Nick's dreamy voice and Doggface's floaty commute captured the collective imagination of the internet – by the time he knocked off work, the clip had gone viral. Naturally, the video sparked a copy cat craze, while also turning Doggface's life upside down. Ocean Spray gifted him a new car to say thanks for all the free publicity, Fleetwood Mac's 1977 album Rumours re-entered the charts, and the 37-year-old is now in talks for his own TV show.

With a captive audience in dire need of entertaining, social media curators stepped up this year, offering much-needed laughs amongst a glut of updates and case numbers. Deux Moi, an Instagram account that allows users to share wildly speculative rumours about celebrities appealed to our thirst for guilty pleasure gossip. The page ballooned from 50,000 followers at the start of this year, to more than 500,00 at the time of writing. Meanwhile, Syrian artist Saint Hoax proved that Instagram pages could be celeb-obsessed while also having a social conscience. The account used it's massive reach to push the #FreeBritney movement into the mainstream, leading to a legal examination of her father's conservatorship.

Schitt's Creek: For the Schitt show that was 2020

2020 was the year we cheered from the sidelines as a wealthy and entitled family endured a spectacular fall from grace. Amazingly we refer not to Donald and Melania, but instead to Johnny and Moira. Despite premiering way back in 2015, Schitt's Creek permeated pop culture in a way no other program could rival. The redemptive tale of the Rose family struck a chord with binge-watchers perhaps buoyed by the message that even the hideously unlikeable can turn a corner. Plus it offers a near endless stream of quotes that seem to sum up the mood of 2020 entirely. I'll leave you with this one from the great Moira Rose: "Pick up a hammer and nail this coffin shut!"

Annie Murphy as Alexis, Eugene Levy as Johnny, Catherine O’Hara as Moira and Daniel Levy as David in Schitt’s Creek.Credit:CBC