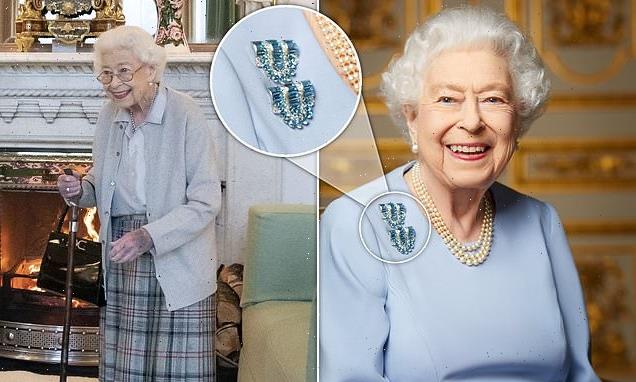 A nod to her ‘Papa’: The Queen paid tribute to her father King George VI by wearing aquamarine and diamond brooches he gave her for her 18th birthday in a portrait released by the Royal Family on the eve of her funeral

The Royal Family has released a never-seen-before portrait of Her Majesty The Queen on the eve of her funeral.

It was taken at Windsor Castle in May earlier this year with the Queen flashing a beaming smile while wearing some of her favourite jewellery.

Her late Majesty was wearing a pastel blue dress, adorned with a stunning pair of aquamarine and diamond clip brooches.

The brooches, worn separately above each other, which were an 18th birthday present from her beloved ‘Papa’, George VI, in April 1944. 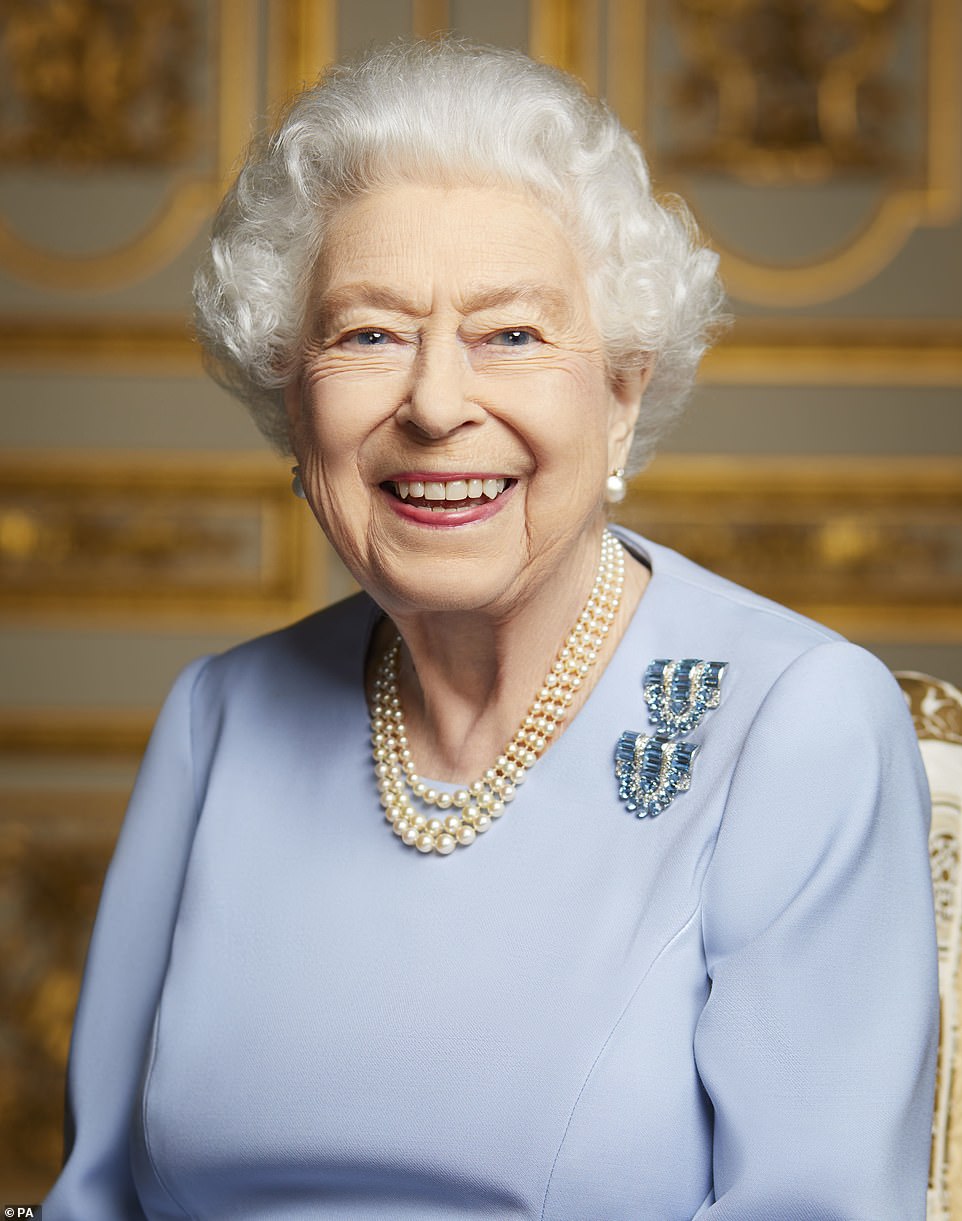 The Royal Family has released a never-seen-before portrait of the Queen on the eve of her funeral. The portrait was taken in May earlier this year at Windsor Castle 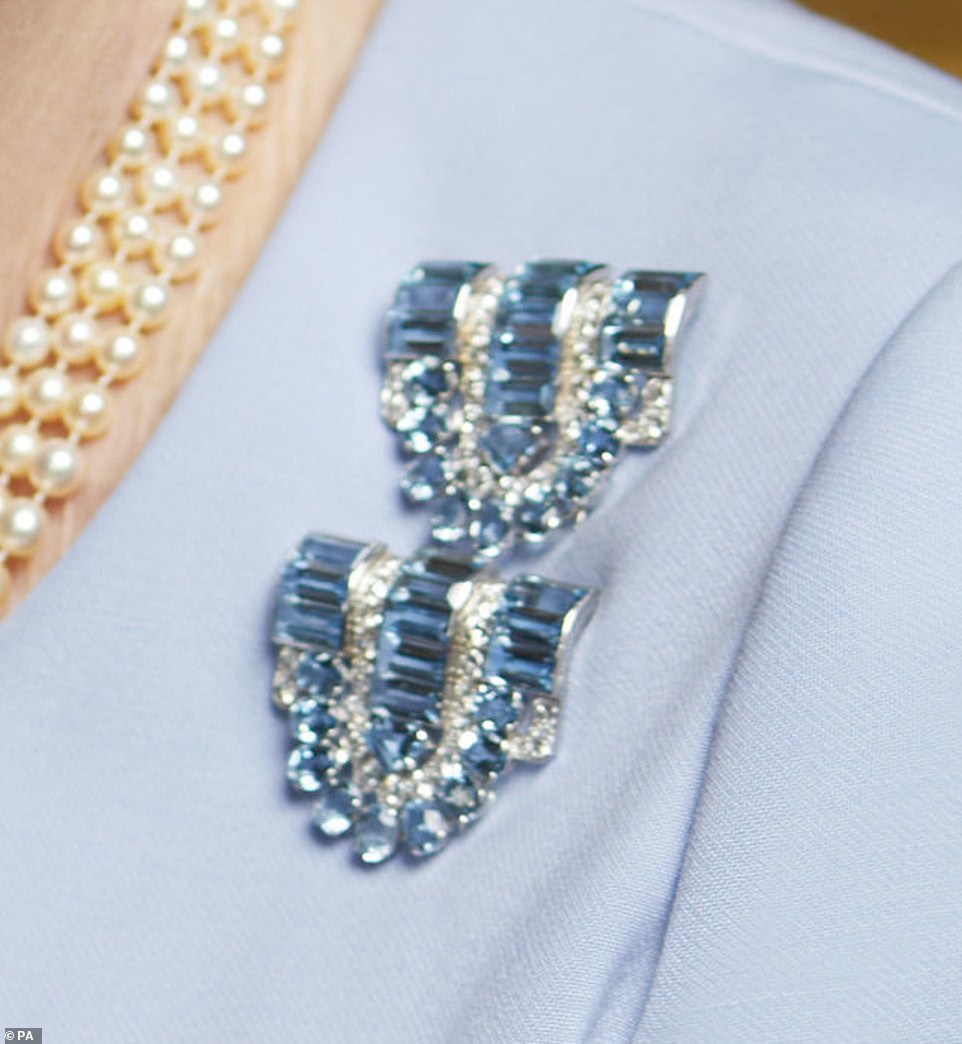 She was wearing her aquamarine and diamond clip brooches, worn separately above each other, which were an 18th birthday present from her beloved ‘Papa’, George VI, in April 1944

She was also wearing her three-stranded pearl necklace, which appeared to be the same one she wore in the last ever photo of her (pictured), as she met Prime Minister Liz Truss at Balmoral Castle in Scotland

The monarch also accessorised with pearl and diamond earrings and a three-stranded pearl necklace.

They appear to be the same earrings the Princess of Wales has worn four times in the past week to pay tribute to the late monarch.

Meanwhile, the necklace appears to be the same one she wore in the last known photograph of her, when she met Prime Minister Liz Truss at Balmoral Castle just days before her death.

Throughout her life, the Queen amassed a jewellery collection full of family heirlooms, priceless treasures and gifts from world leaders.

The monarch was rarely seen without diamonds, pearls or gemstones adorning her clothes, with royal commentators sometimes suggesting she used the pieces to send unspoken signals.

Particular attention was paid to her brooches: Her Majesty would often choose one with a connection to the person, country or organisation she was visiting. 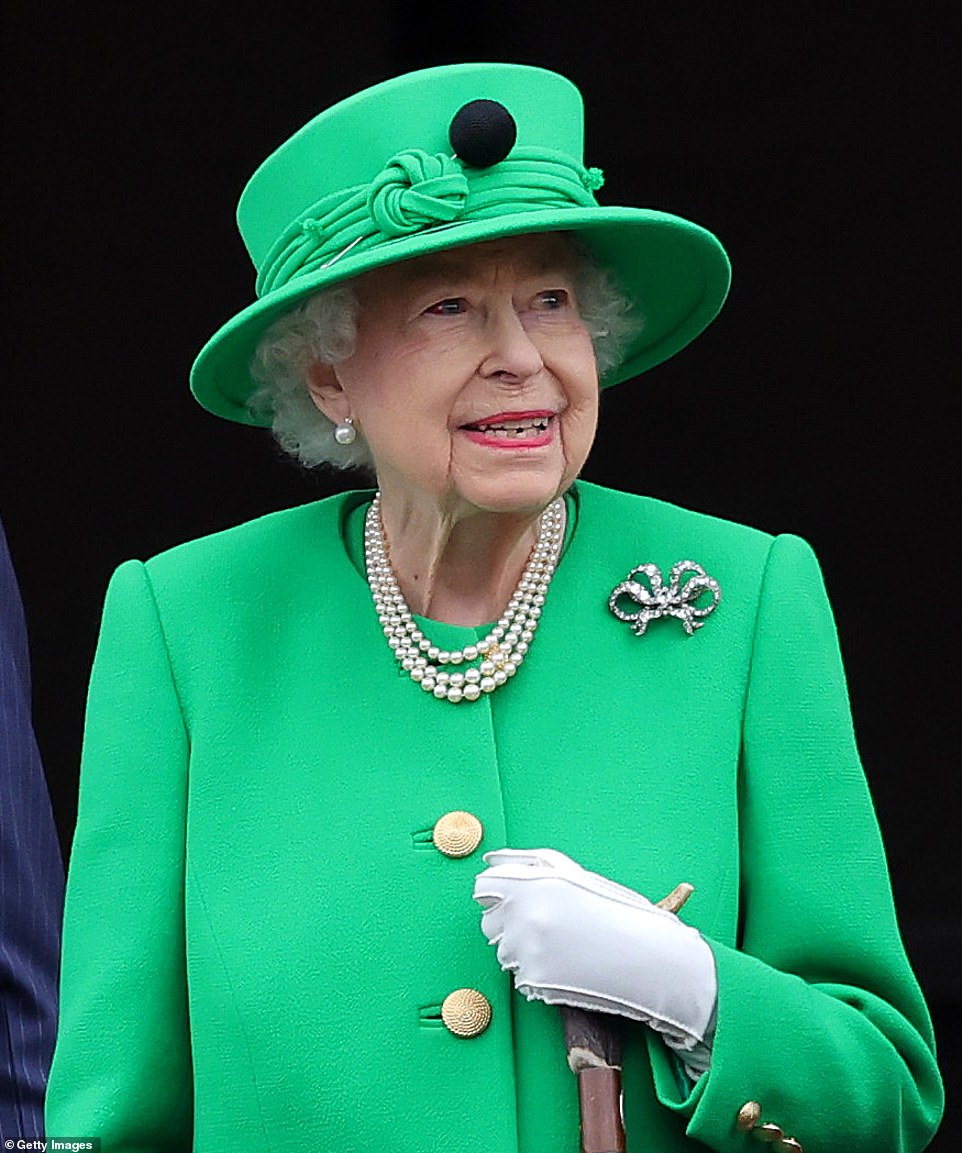 The Queen was rarely seen without a dazzling array of diamonds, pearls and gemstones decorating her bright and colourful clothes (pictured, in 2022 at the Platinum Jubilee celebration wearing her favourite pearl necklace, earrings and one of her favourite brooches the Kensington Bow brooch) 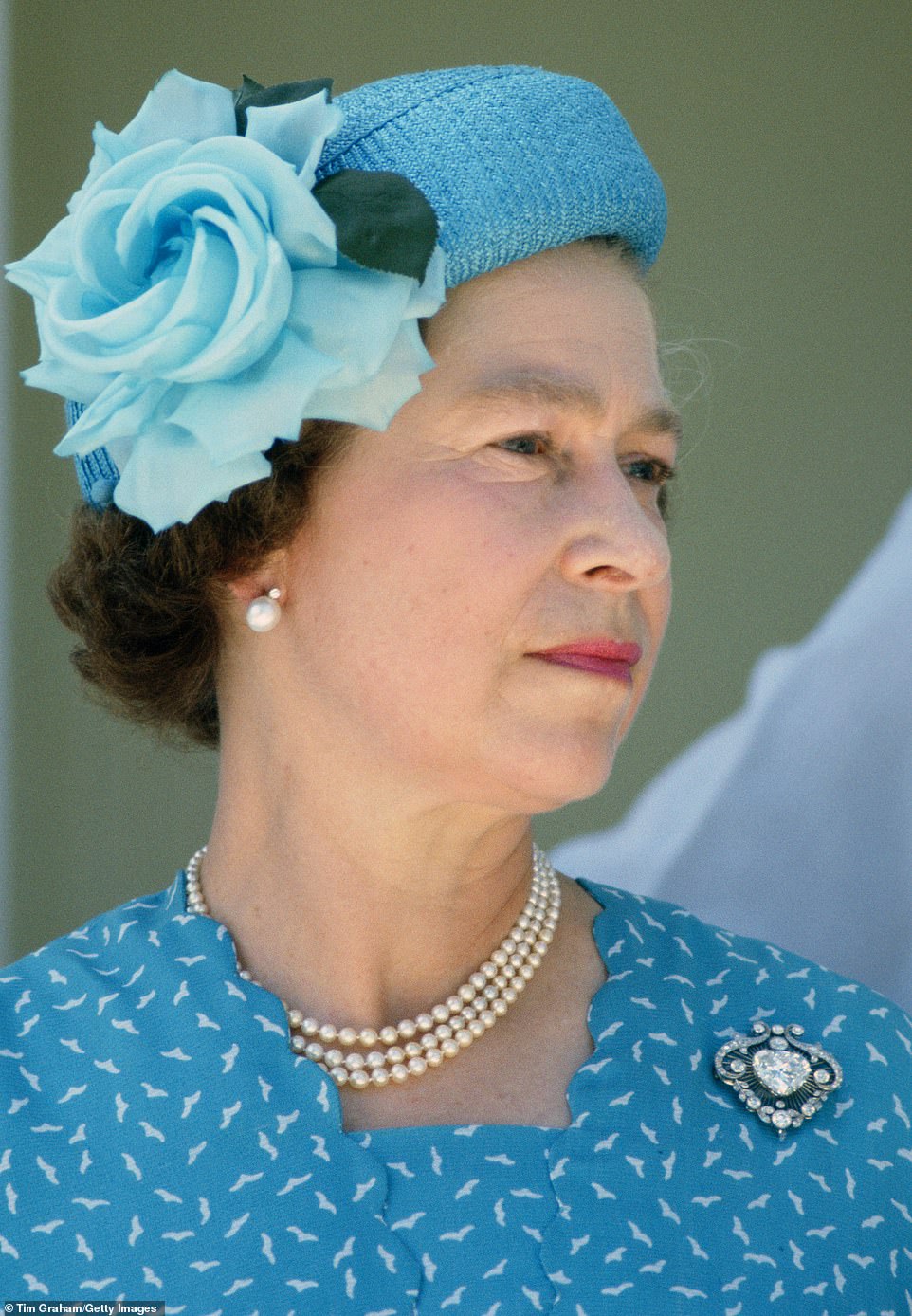 The Queen had a huge selection of brooches, with over 100 in her personal collection. One of her favourites was the Cullinan V Brooch, given to Queen Mary, the Queen’s grandmother, by the people of South Africa in 1910 (pictured wearing it during a visit to Tuvalu in South Pacific)

The Queen was believed to have more than 100 brooches in her collection.

The art deco-style Boucheron clips worn in the portrait released on Sunday evening were adored by the late Queen.

They are made of aquamarine and diamonds and in a typical 1940s design and combine baguette, oval and round stones.

The distinctive style of the brooches – one often used by Cartier – led many jewellery experts to believe the clips were actually the work of the brand, which is why they are often incorrectly identified as the Cartier aquamarine clips.

The clips can be worn in a number of different ways: as matching clips, on either shoulder or as a single brooch.

The Queen usually wore them as separate clips, one above the other, on her left shoulder.

Due to the translucent nature of the jewels, the Queen typically wore them with blue or pale purple fabrics that enhanced the natural colour.

She wore the pieces on a host of occasions over the years, including during her televised message on the 75th anniversary of VE Day in May 2020.

Meanwhile, although many often associated the Queen with her incredible royal collection of priceless tiaras, intricate brooches and dazzling diamond earrings, she was, like many Englishwomen of a certain age, most at ease in her pearls. 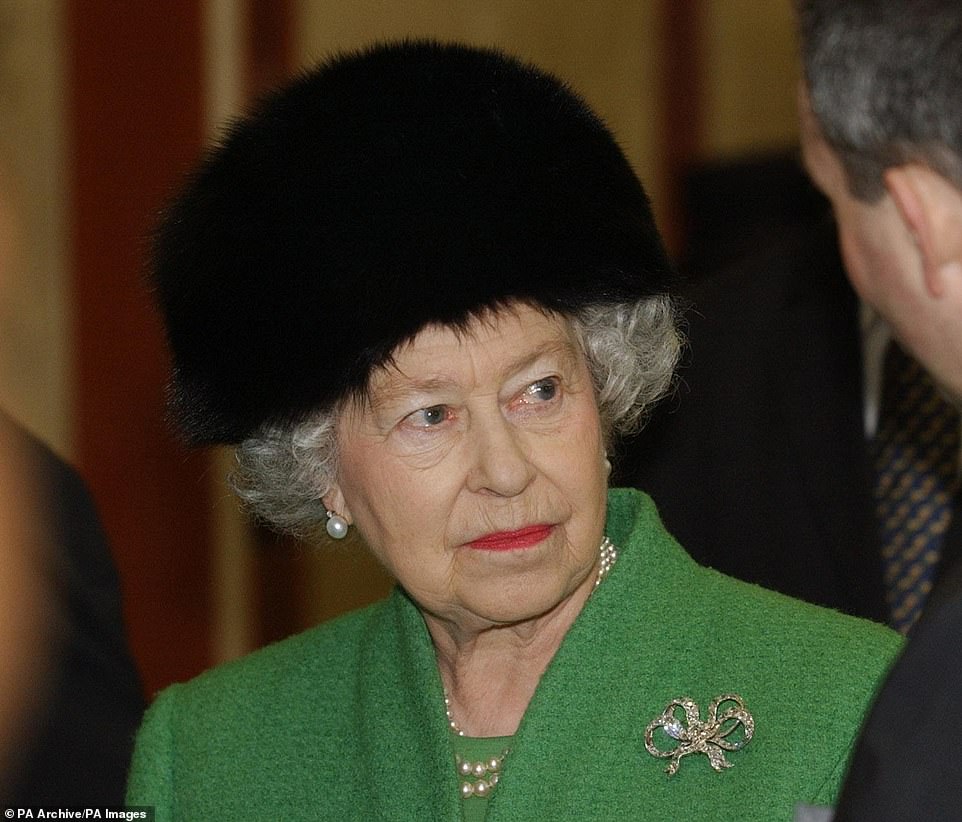 One of the royal’s favourites was the Kensington Bow brooch, a wedding gift from the residents of Kensington to her grandmother in 1893, costing £450 (about £40,000 today). (pictured in 2005 visiting Bristol university) 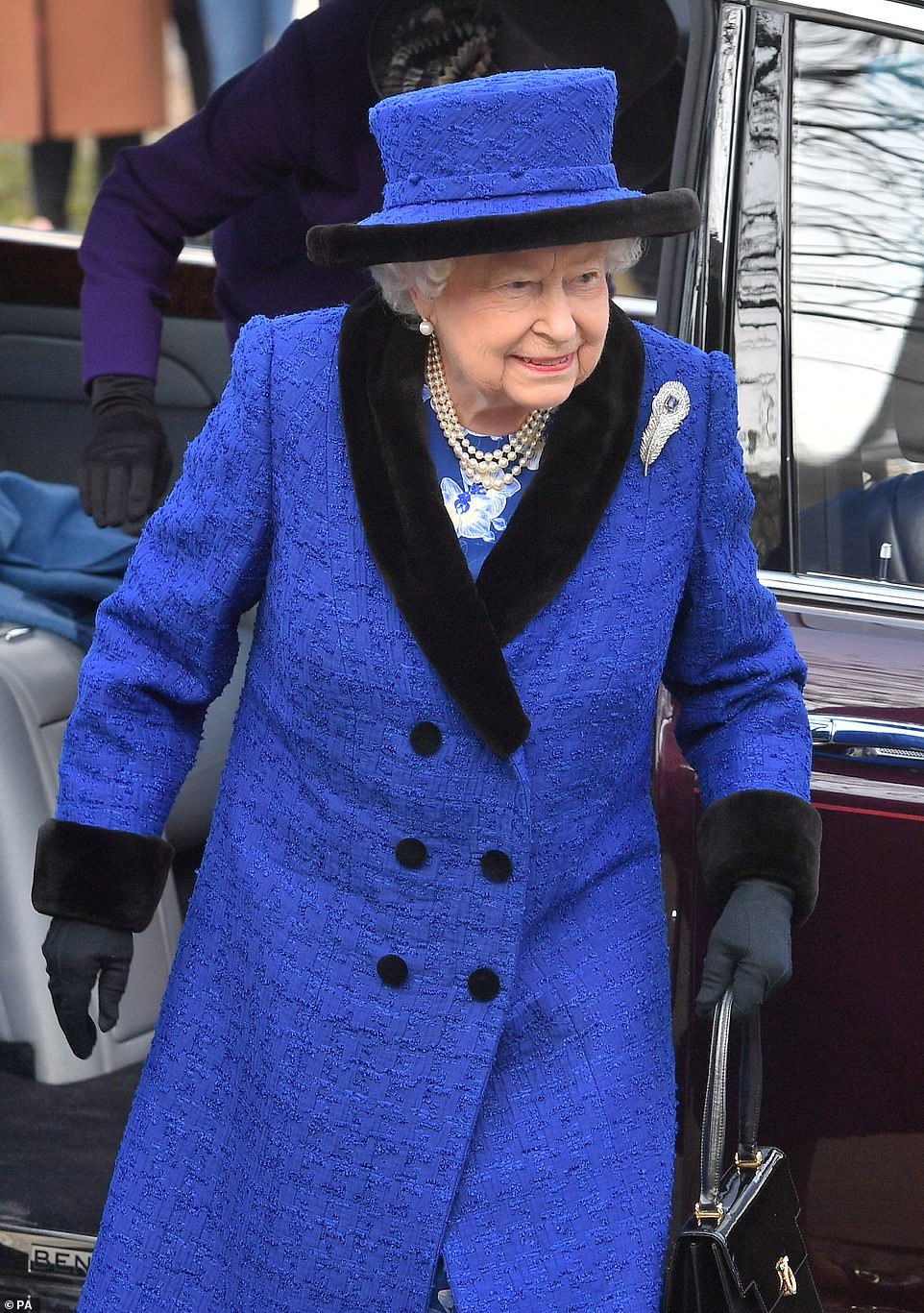 Another of the 2,500 wedding presents given to the Queen on her marriage to Prince Philip, the Carrington Sapphire Feather brooch (pictured) was a gift from Carrington jewellers. A fine diamond feather with a sapphire centre, it was always paired with blue or purple, as here in 2019

Pearls were the Queen’s first ‘serious’ piece of jewellery.

When her grandfather George V celebrated his Silver Jubilee in 1935, he gave both his granddaughters pearl necklaces.

Among the collection Elizabeth owns today are two stunning necklaces – the 18th-century Queen Anne pearl necklace and the 50-pearl Queen Caroline necklace, both given as a wedding present from her father.

Her favourite necklace for quiet days was her single-strand version, one of the first pieces she acquired, and very much in the English tradition, matching the timeless elegance of her treasured pearl and diamond studs.

When it came to earrings, like her necklaces, the Queen had a love of pearls.

She often chose a simple stud or pearl drop for her daily appearances.

The royal’s favourite earrings for casual wear were the simple Queen Mary’s Button Earrings, which featured a single pearl with a small diamond on top.

Meanwhile she would wear the Ladies of Devonshire earrings for more formal day events, such as the Diamond Jubilee service or the Order of the Garter service, as well as for evening occasions.

Queen Mary gave the Devonshire Earrings to her granddaughter, Princess Elizabeth, as a wedding present in 1947.