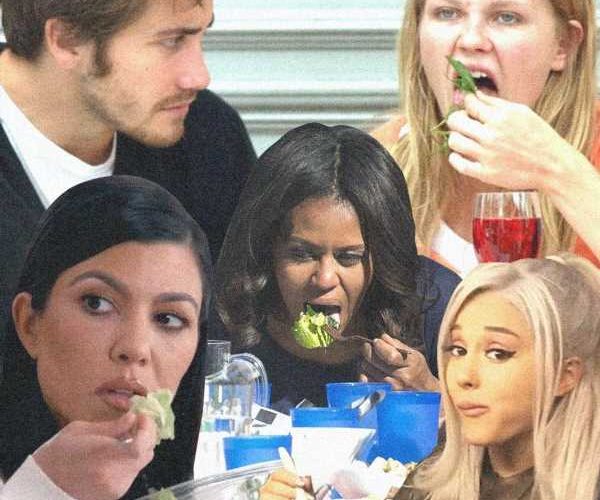 Enter the world of The Salad Lab, where you, too, can make salads loved by the Kardashians, Ariana Grande, Michelle Obama, and more. 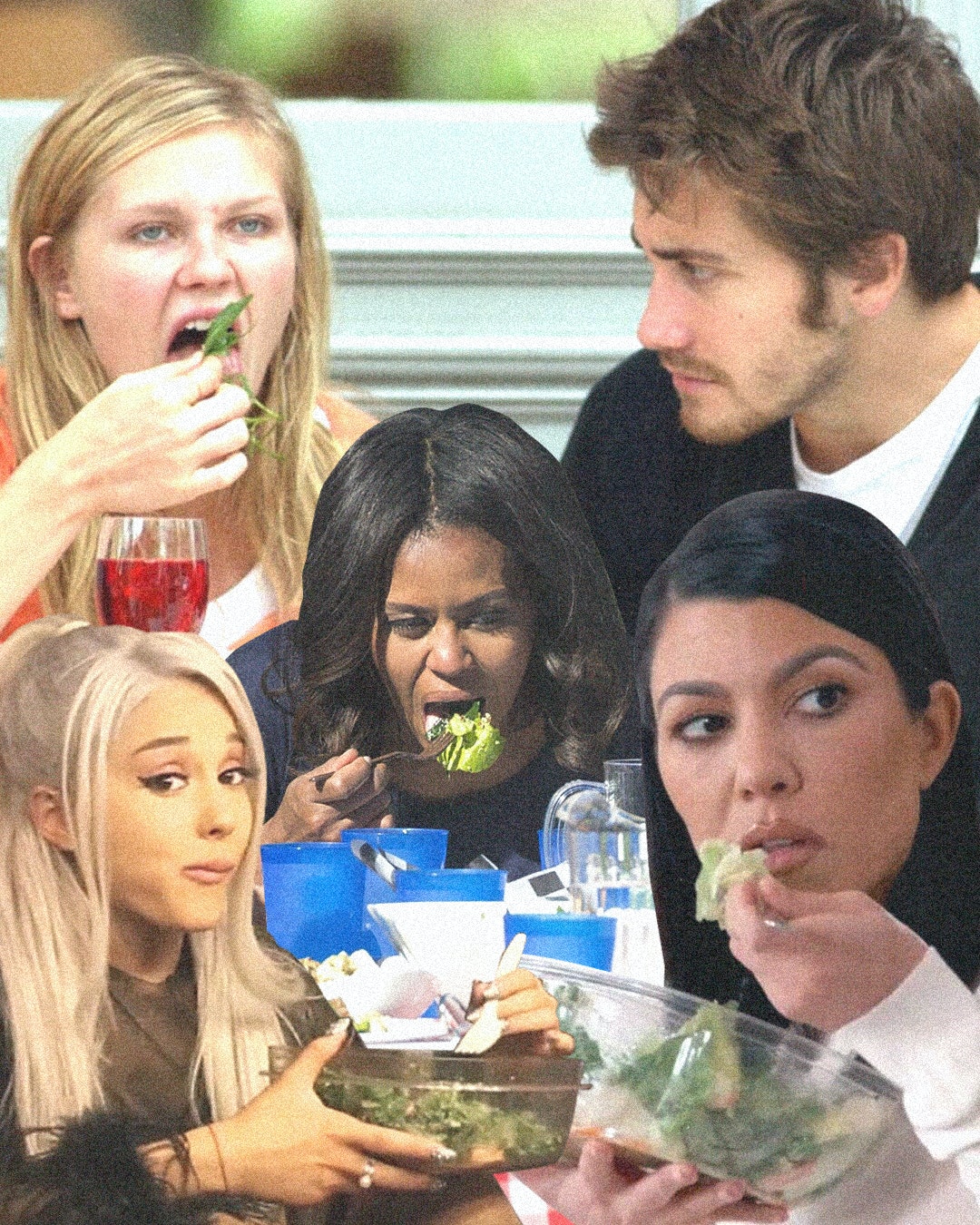 At the beginning of the pandemic, I tried to avoid the dreaded doom scrolling to which nearly everyone fell victim. Of course, I eventually caved in the summer of 2020, and hit the download button on TikTok. The app’s shockingly accurate (read: creepy) algorithm quickly picked up on the fact that I loved FoodTok. And the one account that appeared on my feed without fail each night was The Salad Lab.

The vibe is exactly how it sounds: you watch a woman (whom I’ll refer to as Salad Lab Lady, as she prefers to keep her real name private) make a salad, using tools like petri dishes and test tubes to go along with the laboratory theme. All you hear is her voice and all you see are her hands, ingredients, and the bowl that acts as the great veggie vessel. Every video opens with the line: “Welcome to The Salad Lab, where we’re making fabulous salads every day.” How wholesome, how soothing!

One of the best parts of the channel is Salad Lab Lady’s recipes based on the salads that celebrities love. Unsurprisingly, these particular videos usually go viral: Ariana Grande’s favorite salad (3.4 million views), a sweet and salty combo of greens, strawberries, tofu and dates; Kourtney Kardashian’s famed Poosh Meeting Salad (7.7 million views), a romaine-based concoction mixed with a citrus-y vinaigrette that the reality TV star eats during her site’s weekly editorial meetings; Michelle Obama’s garden salad (2.4 million views), and a personal favorite, Guy Fieri’s Family Favorite Salad with ranch and croutons (1.8 million views). In addition, there are re-created salads from well-known restaurants like Cheesecake Factory, Panera, and for you Angelenos, Joan’s on Third.

As I watched the transfixing videos, I found myself with the strange desire to make salad creations of my own. (It’s worth noting I side-eyed salads throughout my 20s.) Who was this mysterious woman from Sonoma County, California making these, as she calls them, “fabulous” meals? And how was it possible that she had such a hold on someone like me, to compel me to begin eating salads?

Her origin story is simple: the Salad Lab Lady simply loves salads. “When I go out to lunch with friends, my regular question is, who has a good salad?” she wrote in her first message to me. “When I brought something to an event, I always brought my big bowl of salad.”

But she sees salads as more than just a bowl of veggies, grains, and proteins. While Salad Lab Lady started her TikTok account to show recipes to her college-aged daughter and friends, she also found solace in the production of it all. “I lost my home to a fire three years ago, my mom was diagnosed with Alzheimer’s, Covid hit and I found my life turned a little upside down,” she told me via e-mail. “Making the videos became my therapy.” Soon, her page grew in numbers and followers convinced her to keep the channel running. “I guess I wasn’t the only one who loved a good salad and glass of wine,” she added.

Here, the Salad Lab Lady discusses her rapid ascent on TikTok and the subsequent internet trolls, the importance of fresh produce, and of course, her favorite celebrity salad she’s ever made.

How do you pick the salads you feature?

Originally, I picked salads I had at restaurants, made family recipes, or ones that my daughter requested. Then I got curious about the Kardashians’ favorite Chinese chicken salad—how do they make it, and why is it so popular? I just got on Google and started researching. Sometimes people comment and make requests. I got lots of requests from people asking for a Panera-style salad—then, anything from a Nobu-style salad to Applebee’s. If it looks decent, I’ll make it.

Do you buy ingredients at your local grocery store or are you a farmer’s market type of person?

I live in Sonoma County, California—it’s an agricultural area. Historically, a lot of Italians have moved here from San Francisco, and the wine industry is here, so there is fabulous produce; we’re so spoiled in Northern California! I do frequent farmer’s markets, and enjoy them. I try to promote the local farmer’s markets and get people to go. But there’s a market in Sonoma County called Oliver’s and they have everything—the organic section is larger than the regular section. That’s where I get a lot of my stuff. I’ve also challenged myself and gone shopping at the Walmart grocery store. You can buy produce there, but it won’t taste the same as something purchased at a farmer’s market, or a local grocer.

You mentioned that making these videos became your therapy and for me personally, it was nice seeing something on the feed that takes you away from the real world.

I try to stay away from politics. Sometimes I get political statements in the comments and I try to delete them right away, just because there are other platforms for that. When I posted the Michelle Obama salad, I was very surprised by the negative comments people made toward her. But that’s another reason why I’m so drawn to doing this: I’m learning more and more about the country and my community in general.

Speaking of Michelle Obama, you’ve made salads that celebs like Ariana Grande, Billie Eilish, and Kourtney Kardashian love. Do you have a favorite celeb salad, or was there one that surprised you?

I was surprised by Kourtney Kardashian’s Poosh salad, to be honest. I didn’t think it would taste that good—but it was delicious. It’s low-calorie and easy to make. She got a lot of flack from the Poosh thing, but I try to avoid the negativity surrounding the Kardashians. All those girls work hard. I’m not here to comment on what they’re doing socially or culturally. I’m just making a salad.

The Michelle Obama salad was fabulous. The Billie Eilish didn’t get that many hits, but I thought that was a delicious salad. You never know what’s going to go viral and what’s not. You just keep going.

Yeah. It just didn’t hit. Who knew the Guy Fieri ranch dressing was going to be such a hit? I did that one soon after the Michelle Obama salad and I thought for sure everybody would hate Guy Fieri and love Michelle Obama. But it was the opposite effect.

What does the production behind this look like for you?

I make these videos from my house, in my kitchen. I work part-time as an airline customer service agent. It’s funny—I get comments often that say I sound like a flight attendant. Usually, production time takes me anywhere between an hour and two hours to prep everything. It only takes me about 10 minutes to film, then it’ll take me another hour to an hour and a half to edit.

The classic vinaigrette is one of my favorite salad dressings. I haven’t done a blue cheese dressing yet, but I do like a good blue cheese. [Editor note: she just published a blue cheese recipe!]

For someone like me who watches these videos, saves them, and goes “I’m going to make one of these salads” but then gets overwhelmed with the thought of chopping things and prep, what are your salad-making pointers?

Make a list before you go to the grocery store and check it twice. I always forget something. Turn on some good music, get everything out, have a seat, and have some fun.