Rachel Griffiths is in no doubt about the sort of movie she has made with Ride Like a Girl, the story of how Michelle Payne became the first female jockey to win the Melbourne Cup.

“It’s a Disney princess film,” says the 51-year-old actress, who makes her feature-directing debut with the movie. She credits the American producer Bill Mechanic, who is a friend, with helping her realise in every single Disney princess film “by the end of the first song you know who she is, what she wants, and what’s stopping her”.

There are no musical numbers in Ride Like a Girl, but the film does open with some documentary footage of the real Michelle as a little girl. What do you want to be when you grow up, she is asked. “I just want to win the Melbourne Cup,” she answers. 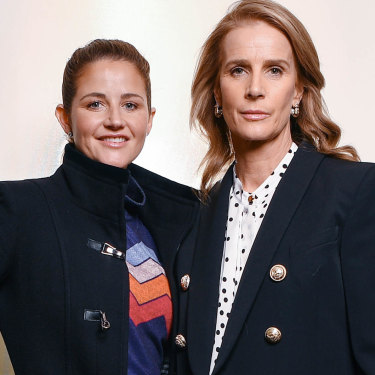 “Who does that,” asks Griffiths in wonder as she sits beside Payne the morning after the film’s world premiere on each and every screen of Village’s Jam Factory multiplex in Melbourne. “That’s a 15-year dream, you know, spoken at the beginning of the film, when she’s five.”

“I feel leading up to it was like a fairytale, and afterwards even more so,” says Payne, who fronted the premiere in a big-skirted pink-hued designer frock that would not have looked out of place on Belle or Ariel or pretty much any Disney princess other than maybe Elsa.

“As soon as I won the race and got off the horse I was like, ‘This is so much more than me just achieving my dream’. There were just so many different elements – of girls having a dream and following it and sticking to it, and people having tough times and getting through it and persevering. Just so many different elements that I feel it was meant to be, in a way. And I feel there’s some sort of responsibility now to carry that on.”

Payne isn’t alone in feeling her story had wider significance. “The Melbourne Cup doesn’t mean a lot internationally, we’re not kidding ourselves about that,” says producer Richard Keddie. “And horse racing isn’t a big sport universally, although it does have some reach. But to me this story is like Billy Elliot, but with horse racing instead of ballet.”

Payne grew up near Ballarat, one of 10 children being raised by father Paddy, a trainer, following the death of his wife Mary in a car crash. Michelle was just a baby when her mother died; she and the next-youngest sibling, Stevie, who has Down syndrome, were (and are) inseparable, referred to by their father and siblings alike as “the little kids”. 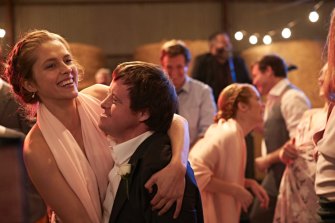 Teresa Palmer as Michelle Payne and Stevie Payne as himself in <i>Ride Like a Girl</i>.Credit:Transmission

That bond is one of the sweetest elements in Ride Like a Girl, a story that is unashamedly upbeat despite touching on tragedies – not just the death of Mary but also of Michelle’s sister Brigid, from an aneurysm following a riding fall – plus chauvinism and the habitual near-starvation faced by jockeys in pursuit of an ideal riding weight. And it’s helped massively by the fact that Stevie Payne is played by Stevie Payne.

How does it feel to play yourself, I asked Stevie when I visited the set one blowy spring day last year.

“Ah, it’s unbelievable,” he answered, beaming. “When they asked me to be an actor, I didn’t think I was going to do it, because I haven’t done it before.”

Do you find it at all scary? “Not really.”

Directing Stevie, says Griffiths, was “the easiest part” of making a movie with no shortage of challenges (working with animals and children being right up there).

She cites the maxim of legendary screenwriter Robert Towne (Chinatown) that every great film ultimately is built around three extraordinary moments between people. “That’s what I was looking for all the time. And most of them have Stevie.”

As a performer, she says, “he’s incredibly present, he’s incredibly open, he is utterly truthful. And they are the three things you’re trying to get your actors to be.

“Thirty years ago, you’d get Dustin Hoffman to play that character. Thankfully we live in a world now of inclusive cinema, where the appropriate people should be playing the roles.” 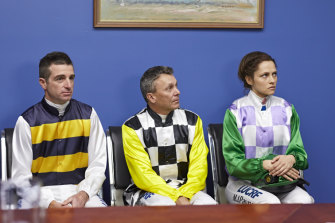 There's plenty of chauvinism on display in <i>Ride Like a Girl</i>, but it's Payne's fighting spirit that Griffiths wants audiences to remember most.Credit:Transmission

Despite feeling her story had some broader relevance, Payne wasn’t bursting to see it turned into a movie.

“You never imagine in a million years there’s going to be a film made about your life. But I live by gut feeling and as soon as I met Rachel and the warmth that came from her, I knew I was happy with her taking the reins,” she says.

Convincing her family, though, was another story. “That took a little while. They were certainly not on board with it. They were just, ‘We don’t want to talk about our family, we’re private people’. I didn’t particularly want a film about my life either. But I pointed out that they can make a film without our consent, someone else can just do whatever they want, so it was better to go with people that we could trust.”

Not that she sought to have any influence over the version of her life that ended up on screen.

“I didn’t want to be a part of it,” Payne says. “I just thought that’s for them to do and they didn’t need me interfering and putting in my two bob’s worth.” 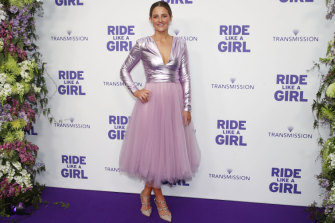 Just like a Disney princess: Michelle Payne at the premiere of the movie about her life.Credit:Scott Barbour

Teresa Palmer plays Payne in the film and is full of admiration for her, as an individual and a role model.

“We have absolutely connected,” the Adelaide-raised, LA-based actor says. “She’s a joyful, wonderful woman, such an inspiration and she’s using her profile to effect positive change.”

Palmer grew up riding horses and does some of her own riding in the film – but not the race stuff.

“Being a jockey is so different to being someone who just takes a horse out for a ride,” she says. “It’s just incredibly technical.”

Many of her race scenes were performed in a mechanical harness or by a riding double whose face was digitally replaced with Palmer’s in the edit suite. Still, she says, “I want to make it look right. I put pressure on myself because I’m such a perfectionist. I want people watching the movie to be like, ‘Oh yeah, she does ride horses, and she obviously trained to be a jockey’.”

One thing she could never nail was the diet. “The discipline you have to have, and what they have to do to get their weight down – sometimes jockeys are trying to lose three kilos in two days – none of that sounds very fun to me.

“I’m a big eater,” she continues. “I always have a massive plate full of food. And a lot of actors on the film are real jockeys and they’re like, ‘We’ve never seen a jockey eat that much’.” 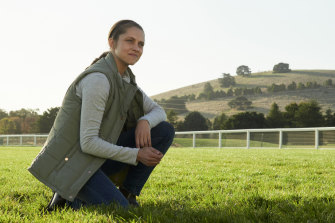 Trackwork: Teresa Palmer has ridden since she was a child, but riding horses is not the same as being a jockey, she says.Credit:Transmission

Palmer sees the film as a product of this moment, when “women are being highlighted and celebrated” like never before. “Michelle faced so much adversity in her life, and she had a lot of restrictions placed upon her by external sources who labelled her weaker because she was female. I love that she just stuck to her guns and now she’s using her win to be an advocate for other female jockeys and other women who are in sports that feel chauvinistic. I’m just very proud of her and proud of this story and all the beautiful messages that are involved in this kind of heroic story.”

Keddie, too, feels the film draws some of its power not just from the inherent drama of Payne’s personal story but from the issues thrust into the spotlight by the #MeToo movement.

But Griffiths is a little hesitant to have the film framed in that way – in part, no doubt, because she has no desire to alienate the potential male audience, and because she wants to see this as a story of positives rather than negatives.

“I see it as a ‘you can’t be what you can’t see’ story,” she says. “It’s not a man-shaming movie. We celebrate Paddy, we celebrate [trainer] Darren Weir as a guy who kept Michelle on the horse and gave Stevie a job, both quite gutsy and unconventional moves. He only saw the abilities in these two human beings and didn’t judge them through any other lens. It really is ‘hold on to your dream, and you have to work your ass off if you want to realise it’.” 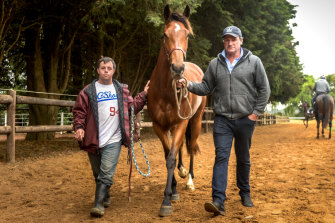 Speaking of Weir, who was banned from racing for four years in February for using electric jiggers in training, the film steers well clear of the controversy. Was Griffiths concerned that it might have an impact?

“I don’t say this to be nasty, but only men raise that,” says Griffiths, bristling. “I think for women, they just don’t see its relevancy. It’s just very common to change the conversation of a woman’s accomplishment to something about a guy.

“I was dismayed that that might happen,” she continues. “But I didn’t shy from celebrating him in my film because there are door-openers in every profession, and then there are guardians of the gate, deciding who can come through and who can’t. And in our film, he keeps the woman on the horse and he gave Stevie a job. And I think both of those things reflect that he’s a man of heart and he saw their abilities – and I would rather that be the message than the other conversation.”

Of course, one other controversy is likely to dog the film – the claims of animal cruelty levelled against the profession by activists such as those who protested outside the premiere last weekend.

Payne argues that anyone who had spent any time in a racing stable would see things differently.

“They’re treated like kings,” she says of the thoroughbreds. “There’s massages, they’re taken to the beach, they couldn’t be treated any better.”

It’s not because the owners, trainers and jockeys are altruistic, it’s simply because that’s how you get results. “You won’t get the best out of a horse unless they want to do it for you because they’ve got a mind of their own, they’ll just say no.”

Despite nearly losing her life in racetrack accidents more than once, Payne is still riding. But these days she’s a trainer, too, with Stevie a strapper in her stables.

Her passion for the sport is undimmed – and infectious. She’s even got Griffiths on board in a syndicate, along with some old schoolmates from Ballarat, “and a netballer and a billionaire”, in a horse she thinks just might be another champion in the making.

“We’re going to Royal Ascot next year. That’s my next dream,” says Payne. “I think she has the potential to do it.”

If it works, she’ll be in England as both jockey and trainer. There’d be material there, surely, for a sequel.

20/09/2019 Lifestyle Comments Off on ‘This is not a man-shaming movie’: Rachel Griffiths on Ride Like a Girl
Lifestyle