‘Britain’s vainest man’, 27, who set up a crowdfunding page to pay for his liposuction is accused of ‘begging’ by a fellow This Morning guest – but viewers blast HER for being rude

A man who set up a crowdfunding page to raise money for liposuction, despite having two jobs, has been accused of ‘begging’ by a fellow This Morning guest.

Sam Barton, 27, from Birmingham, insisted that there’s nothing wrong with asking others to pay for something he really wants, but journalist Anna May Mangan criticised Sam for using the internet to ‘pick pocket’.

However, while some viewers criticised Sam’s actions, many others hit out at Anna for being ‘rude’ and attacking her fellow guest, who’s previously used crowdfunding to get new shoes and go on holiday.

Sam, who has been dubbed ‘Britain’s vainest man’, clarified that he hasn’t asked strangers to contribute to his target of £3,500, but has set up the page so that friends and family can donate as a gift for his 30th birthday. 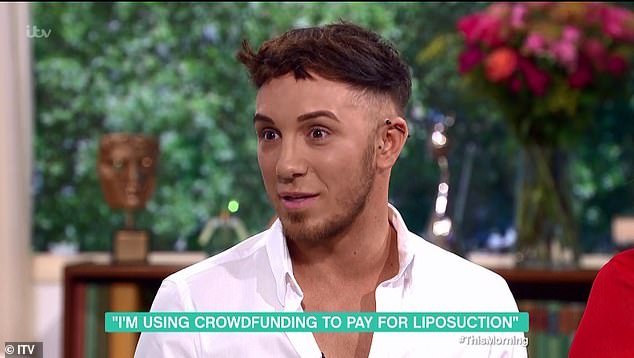 Sam Barton, dubbed Britain’s vainest man in Britain, defended his decision to set up a crowdfunding page to pay for his liposuction 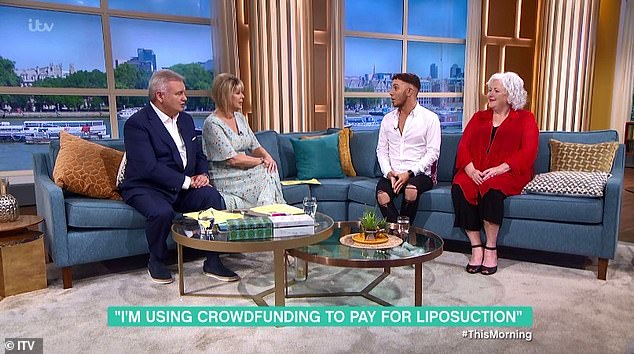 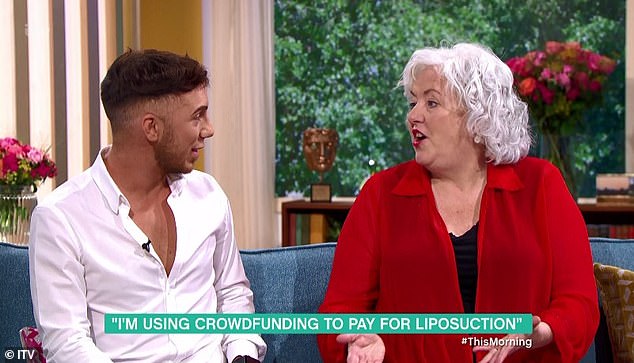 Journalist Anna May Mangan critcised Sam for asking people, including strangers, for money to pay for something so personal

‘I’m not asking everyone or anyone. I’ve got a page. I’m going to be 30 soon and on my birthday every year I get gifts such as brew your own beer, clothes that I’m never going to wear.

‘So what I thought I’d do, is ask my family and friends that want to give towards my birthday for them to donate so it actually goes somewhere that I want it too.’

However, he did admit that he would happily accept the money offered to him by a stranger.

‘If members of the public want to donate then I’m absolutely not going to turn it down,’ he stated.

Annoyed that he could behave in such a way despite having two jobs, Anna didn’t hold back when she told Sam what she thought of his crowdfunding page. 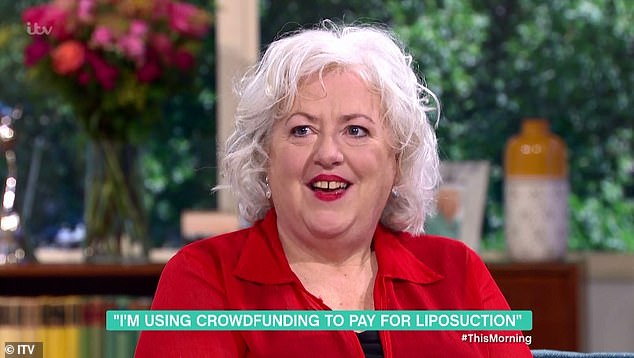 ‘It’s nothing else but online begging. That’s all it is, and have you ever considered doing something to earn people’s contribution?’ she said.

‘Before the time of the internet, would you have gone knocking door to door? Of course you wouldn’t. The internet is enabling you to beg or pick pocket even worse.’

Dismissing the comparison, Sam responded: ‘Pick pocketing is stealing and this isn’t stealing. It’s not a form of theft, I’m not going into their bank accounts and taking it.’

In a bid to defend himself, Sam explained that his crowdfunding page had a clear message which clearly states what he wants to do with the money.

‘I don’t need funding, I’ve never said that I need it. In the dialogue it does clearly say that it’s something that I’d like,’ he said during the interview with Ruth Langsford and Eamonn Holmes.

Refusing to be dismissed on the subject, Anna asked: ‘Do you not feel cheeky? You’ve got money, you’ve got a job and yet you’re still asking people for stuff? What’s next, a car?’

As the debate played out on air, viewers turned their attention to Anna and commented on her reaction, with some criticising her for the comments she made. 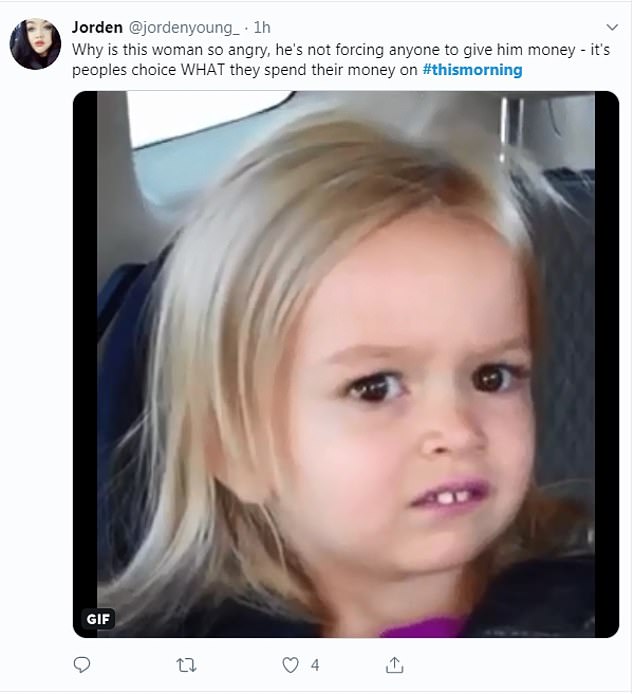 ‘Why is this woman so angry, he’s not forcing anyone to give him money – it’s peoples choice WHAT they spend their money on #thismorning,’ asked one viewer.

‘This debate is so interesting. He’s not begging or stealing he’s literally asking for you not to waste your money on something he won’t use. The woman in the red is disgustingly rude! #ThisMorning,’ another user of the social networking site commented.

A third This Morning viewer posted: ‘I get the feeling that this women is just permanently angry, she’s just been invited to the studio to be argumentative #ThisMorning’

‘This woman is a bit of a bully.. calm down love he’s not forcing anyone to donate it’s optional #ThisMorning,’ came the response from one Twitter account before another agreed with the post: ‘This woman is awful, no opinion just attacking#ThisMorning.’