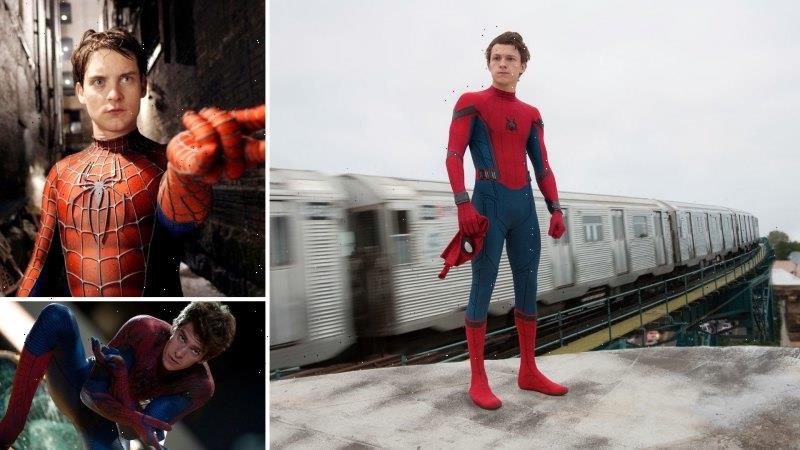 The famous red suit, the mask with the exaggerated white eyes, the webs fired from the wrists. Spider-Man is back in cinemas for the ninth movie in 20 years, without counting his appearances in various Avengers, Captain America and Venom instalments.

And not just back in cinemas. Spider-Man: No Way Home has become the “must see” and “must see again” movie since just before Christmas. 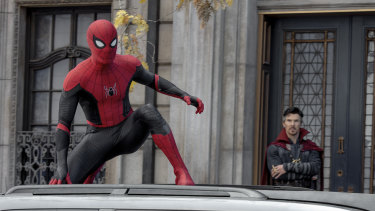 A hit movie that has become a cultural phenomenon: Tom Holland and Benedict Cumberbatch in Spider-Man: No Way Home.Credit:Sony

After three weeks, it is heading towards becoming the fourth highest-grossing movie in Australian cinemas, taking $58.3 million here and $US1.39 billion ($1.94 billion) around the world so far.

As a relatively unheralded Marvel movie screening as Omicron cases surge, even cinema insiders are stunned by how popular it has been. “Wow,” said Sony Pictures Releasing boss Stephen Basil-Jones of the box office. “It’s blown me away the response,” said Event Cinemas executive Claire Gandy. “There’s [been] cheering and clapping through the film and absolute silence in the right places.”

There is now a studio campaign to have No Way Home nominated for best picture at the Oscars. Past Spider-Man movies have been trending on streaming services. And having completed a trilogy with Holland, producer Amy Pascal wants him to stick around for another trilogy.

Batman and Superman are evergreens in DC Comics movies; the Avengers movies have been hugely successful for Marvel. But Spider-Man just keeps coming back.

Holland was more convincing as a teenager in Spider-Man: Homecoming (2017), Far From Home (2019) and No Way Home (2021), as Peter Parker’s world became more socially diverse and high-tech.

His warm-hearted relationship with Zendaya’s MJ has been a highlight of the trilogy and – like Maguire and Dunst then Garfield and Emma Stone for a time – it has become a relationship in real life as well.

So with two new animated and potentially three new live-action movies on the way, the Spider-Man business is thriving. 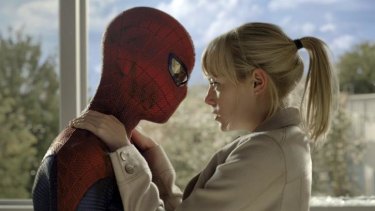 Andrew Garfield and Emma Stone in The Amazing Spider-Man.Credit:Sony

That’s testament to the character’s appeal: an uncertain orphan with relatable teenage anxieties about girls, school and his future gets superpowers after being bitten by a radioactive spider then has to deal with questions like “who am I now?“, “who can I tell?” and “how do I use these powers?”

So who is Australia’s favourite Spider-Man?

The nine movies so far have taken a handsome $248 million at the Australian box office. Adjusting for inflation, that is equivalent to more than $290 million now.

Adjusting Numero box office statistics, No Way Home is easily the most successful Spider-Man movie with weeks of its cinema run still to come.

While you might expect audience fatigue about yet another version of “with great power comes great responsibility”, it has clearly appealed to a new generation of viewers, just as appearances by Maguire and Garfield to battle old foes brought back from the multiverse have appealed to older viewers. 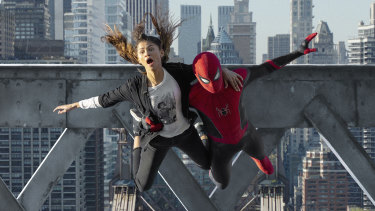 Zendaya and Tom Holland in Spider-Man: No Way Home.Credit:Sony Pictures

No Way Home has a witty script that makes Parker and MJ feel human, taking the curse off the inevitable CGI battles with villains. Director Jon Watts, who had previously made the little-seen movies Clown (2014) and Cop Car (2015), built interest with a storyline that has continued through the three movies.

Also helping is Zendaya’s huge popularity on social media and a buzzy trailer that was watched a record 355 million times in the first 24 hours online last year.

Second on our box office list is the original Spider-Man with Maguire, followed by Holland’s Far From Home then Maguire’s Spider-Man 2 and 3. 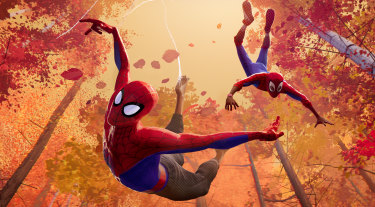 Winner of best animated feature film at the Oscars: Spider-Man: Into The Spider-Verse.Credit:Sony

Adjusting to current dollars, Holland’s combined box office is $124.3 million compared to Maguire’s $116.2 million and Garfield’s $38.5 million, which makes the latest Spider-Man the most popular at the box office.

Now 25, Holland’s star power will be tested when he and Mark Wahlberg play adventurers seeking treasure in Uncharted, which opens in cinemas next month, then when he plays Fred Astaire in a coming bio-pic.

If Holland sticks around for another trilogy, he will become the definitive Spider-Man for another generation of fans. Though Peter Parker might need to finish high school.