On the surface, The White Lotus is the exact type of show those of us in lockdown should be desperately avoiding. Set on a glorious five-star resort in Hawaii, HBO’s comedy-drama series, airing on Binge, is an ode to a pre-pandemic world (even though it was actually shot in a coronavirus bubble).

But despite the many sweeping sunset shots – and there are plenty – The White Lotus might just be the surprise cure to your travel blues. Ostensibly, the show is a murder mystery, but really it’s a searing exploration of class, wealth, and relationships played out between a mixed bag of painfully familiar characters.

Each character is unlikeable in their own unique way and serves as a reminder that while travelling is soothing for the soul, it also thrusts you into the path of people you can’t stand, can’t avoid and can’t wait to get away from. 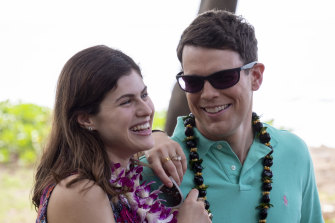 Jake Lacy and Alexandra Daddario as a newly married couple in The White Lotus.Credit:Mario Perez/HBO

You can clock this couple a mile off – they’re the ones making sure everyone in earshot knows they’re “just married” in the hope it’ll get them an upgrade, or at the very least a complimentary bottle of Yellowglen.

In The White Lotus, the lovebirds are packaged up as Shane (Jake Lacy) and Rachel (Alexandra Daddario) Patton. The highly attractive Pattons should be having the trip of a lifetime, but Shane can’t move past a mix up that has resulted in their original room being double booked. “I promised my wife the Honeymoon Suite,” he fumes to a clueless employee.

Ironically, Rachel isn’t remotely fussed because she’s too preoccupied with the realisation she may have made the biggest mistake of her life by marrying an uptight trust fund baby. 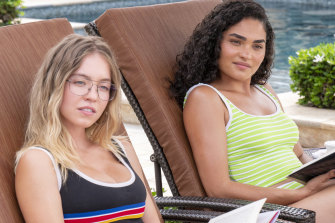 Olivia (Sydney Sweeney) and her friend Paula (Brittany O’Grady) packed a whole heap of sass in their suitcases.

Dragged on holidays by their parents, the awkward teens refuse to engage in any of the “fun” hobbies on offer, instead choosing to indulge in their activity of choice: brooding.

While Quinn might be hard work, he’s nowhere near as bad as his sister, Olivia (Sydney Sweeney). Fluent in sarcasm and convinced she has the world figured out after one semester at university, Olivia is the awkward teen who spends her lunchtime reading a copy of The Portable Nietzsche by Friedrich Nietzsche only to quote it back to you at dinner. 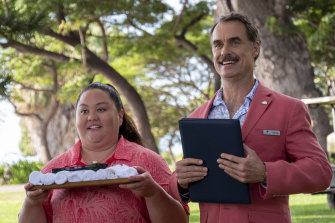 “No request is too big or small,” chimes The White Lotus’ all-smiles all-the-time resort manager, Armond. Played with infectious enthusiasm by Australian actor Murray Bartlett, anyone who has ever set foot in a fancy hotel has dealt with an Armond. They positively thrum with “good vibes only”, giving off the impression that tending to your minor errands brings them unbridled joy.

But no one is ever that excited to help book a tour bus, and you often suspect that their over-exuberance masks a sinister sadness.

The “do you mind if I join?” singleton 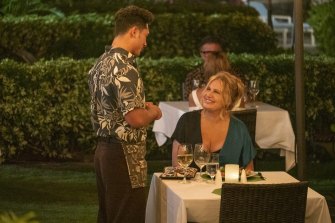 Arguably the most recognisable holidaymaker, this traveller has rolled the dice on a solo trip (possibly after a breakup) and is now busy finding themselves. But what that really means is they’re desperate for company, and it’s only a matter of time before they sidle up to your table and ask the dreaded question, “Do you mind if I join?”

It’s a role Jennifer Coolidge was born to play, and as the troubled Tanya McQuoid, she is both a subject of sympathy and despair. Holidaying alone after her mother’s death, Tanya latches on to anyone who makes eye contact for a second too long, including the staff.

The rich but in a rut parents 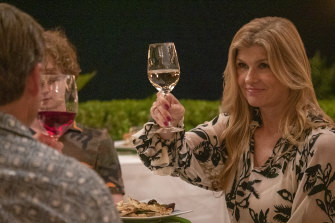 You know the types; Mum bounces between the bar and the pool never spotted without her modesty sarong and iPad. Meanwhile, Dad uses the opportunity to get some judgement-free day drinking done.

In casting Steve Zahn and Connie Britton as the Mossbacher parents, show creator Ben White has nailed the brief. Zahn is note-perfect as the downtrodden dad whose life, wife and children are seemingly a mystery to him. “You love me, don’t you?” he asks his son during a forced scuba bonding session.

Meanwhile, Britton’s Nicole is equally adrift but able to distract herself. When she’s not refereeing fights between her children – “Olivia include your brother, please!” – she’s tending to the demands of her high-powered job as an executive at a GOOP-style website.

Like so many characters in The White Lotus, the Mossbacher parents appear alone even when they’re together, which is perhaps a feeling we can all relate to right now.

03/08/2021 Lifestyle Comments Off on TV series White Lotus reminds us of the worst part of overseas travel: other people
Lifestyle