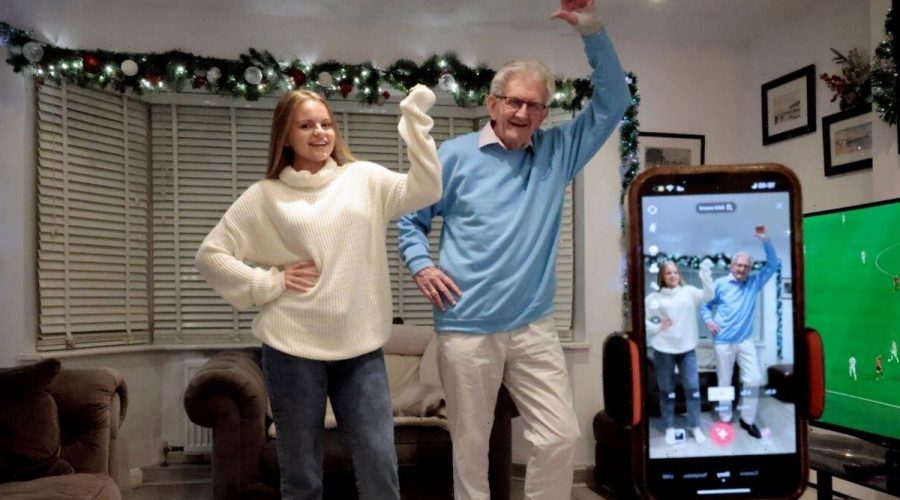 Kim Kardashian gives herself a ‘British chav makeover’ on TikTok

Frank Hackett has always been a natural entertainer. “I’ve always loved dancing and singing and acting – anything for a laugh,” he smiles. So when he found fame on the internet three years ago, he was not astonished in the slightest. “Of course not, I was born for it!” the retired environmental health and safety worker laughs, a twinkle in his eye.

It is no surprise that Frank is loved by so many people – 7.2 million to be precise – on the video-sharing site TikTok.

The unlikely content creator, who is 77 and goes by the name “Grandad Frank” [@grandadfrankk], has won acclaim for his energetic dances and lip-synching performed with granddaughter Kiera Hackett-Hall, 17.

And he is far from alone. Recent years have seen a remarkable rise in so-called “granfluencers” – people aged 50 to 90 who are racking up millions of followers on social media platforms, and earning handsome retirement incomes.

With 11 percent of the site’s users now aged 50 or above, such granfluencers – or “Twilight TikTokers” as they are also known – have seen their followings grow, winning the hearts and minds of youngsters, especially with their humour and wisdom.

They can, it turns out, show the US-based Kardashian family a thing or two.

“The most comments I get seem to be from teenagers who never knew their own grandparents. Or their families have broken up and they don’t see their grandparents anymore,” Frank, originally from Galway, Ireland, explains. “Some of them have really heartbreaking stories.”

Fans also love his occasional videos with his wife Julie. One recent clip of the pair dancing was watched by 2.2 million people.

Kiera, who curates the short videos, which typically last 10 to 20 seconds, tempted Frank onto TikTok in late 2019 and, since then, he has racked up an astonishing 176 million likes.

Indeed, he has become so famous that he gets recognised in Kent where he lives.

“We were at a concert recently in Dartford and during the interval at half-time, I got a tap on my shoulder with ‘Grandad Frank, can we have a photograph with you?’” he says. “I was in the middle of somewhere with complete strangers. It was unbelievable.”

This trend of senior influencers as social media kingmakers has been gathering pace for some time, but the popularity of double acts like Frank and Kiera snowballed during the pandemic as stay-at-home orders restricted opportunities to meet in real life.

Much has been made of granfluencers who become bankable stars through brand sponsorships and lucrative paid-for posts but Kiera, who is in her second year of A-levels, does not put herself and Frank in that bracket.

“Yes, we make some money, but that’s not really what keeps us going,” she says. “We just do it because of the fun, really.”

With his beaming smile and cuddly physique, Grandad Joe, as he is known, is 89 and has six million followers for his videos, light-hearted skits, jokes and dancing with 18-year-old granddaughter Brooke Paintain.

“The dances aren’t my favourite because they can be hard to choreograph, I prefer the funny, light-hearted ones,” the retired truck driver says. “If me or my daughter or one of my granddaughters sees a dance or a trend that we think is funny we share it with each other and decide whether we should recreate it – it’s a lovely thing to have everybody involved.”

When his wife Joyce died in 2008 from dementia, he was left shellshocked.

She was 77 and had displayed no symptoms except for the occasional forgetfulness; her untimely death left him grief-stricken and isolated after 18 years of happiness. “I wasn’t expecting it and suddenly I was alone in the home we’d shared,” the pensioner admits with a sigh. “I think to some extent I just gave up.”

After Joe suffered a near-fatal heart attack, his daughter Wendy insisted he move in with her and her three children including Brooke. It was during lockdown she interested him in TikTok. “She was always on her phone,” he remembers.

“I would ask her what she was doing and it was always TikTok. She asked why I didn’t start my own, and I thought, well, why not. Then my account exploded – I suddenly was getting millions of views on my videos.”

Joe defies expectations with his gallows humour. In one clip as he clicks his fingers, a message reads: “You’re not bringing your wife are you?” He walks off to the side, followed by someone carrying an urn of Joyce’s ashes.

Although some might baulk at this, Joe sees laughter as medicine. “I like to play the joker and I hope showing difficult and painful things like this in a humorous way means other people my age who have experienced loss can feel comfortable having conversations about this,” he says.

It is why he is backing a BT digital skills campaign to support older people to master their mobiles so they can better keep in touch with loved ones and friends.

Research found 71 percent of older people thought sharing videos and pictures could be key to tackling isolation – yet just 17 percent of them did so regularly.

“When I lived alone I did feel lonely,” says Joe. “There was no way I could keep in touch with my family the way I do now because I wasn’t using tech and the internet.”

Another couple intent on spreading positivity on TikTok are husband and wife Jimmy and Joan O’Shaughnessy, from Southport, Merseyside, who have two sons and a grandson.

They have been together since Joan was 16 and Jimmy was 17 and will celebrate their golden anniversary later this year.

After learning to dance in their forties, they became English and British ballroom champions. After joining TikTok during lockdown to keep dancing, they have amassed 2.4 million followers on their account [@twojays2].

“We’ve been together a long time and we get so many comments from people saying they want to be like us, quoting the term ‘relationship goals’,” says former IT worker Joan. “We hashtag ‘love and positivity’ because we find that that’s what people get out of our videos.”

One response in particular came from a man who had lost his wife.

“He said seeing the love we have for each other in our video made him think of the love he had for his wife,” says Joan.

“It really touched us.” They replied privately and publicly with their best wishes. Our followers then sent him love, support and sympathy. That’s incredible.”

They are still messaging each other now.

Joan and Jimmy have so many views that they were asked to do a promotional dance for one of Motown legend Diana Ross’s records last year, which the singer formally approved before it aired. Disney and Amazon Prime have also been in touch.

“It’s turned out to be quite lucrative in the end because we’ve been commissioned to do different dances,” says Jimmy, a former executive for defence firm BAE Systems.

With offers of free cruises and appearances on chat shows in America, they’ve decided to drop the dancing in real life to dedicate themselves to TikTok.

“We spent 20 years doing ballroom and Latin dancing and it’s as if this is another phase of our life that we never thought we’d be involved with,” Jimmy says.

“It’s opened up opportunities for us and the amount of positive feedback we get from people around the world is mind-blowing really.”

He adds: “People are astonished that we’re able to still do the moves that young people do today but we did disco back in the 1970s – we used to have all the moves.”