PROPERTY asking prices have crept up to a record high of over £320,000 due to an "unexpected mini boom" surge in demand.

The average asking price in July stood at £320,265 – 2.4 per cent or £7,640 more than before the coronavirus crisis – according to property portal Rightmove. 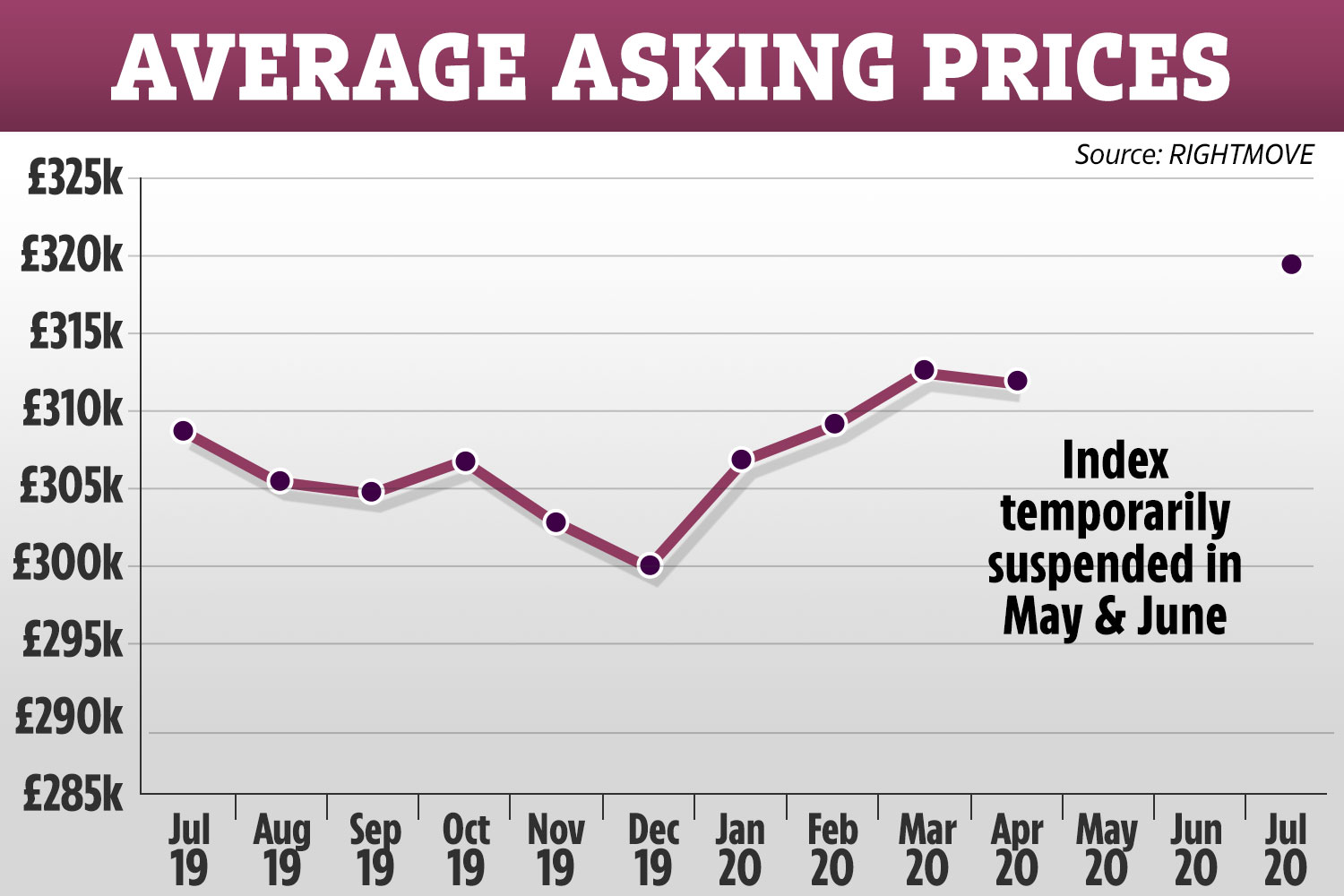 In March, just before the housing market was put on hold to help limit the spread of coronavirus, the average asking price was £312,625, which had also been a record.

On an annual basis, Rightmove says asking prices in July were 3.7 per cent higher than a year ago, which is the highest annual increase for over three and-a-half years.

Experts had warned that property prices could rise as a result of chancellor Rishi Sunak introducing a stamp duty cut for England and Northern Ireland.

What is stamp duty?

STAMP duty land tax (SDLT) is a lump sum payment anyone buying a property or piece of land over a certain price has to pay.

Up until July 8, most house-buyers in England and Northern Ireland had to pay stamp duty on properties over £125,000.

The rate a buyer has to fork out varies depending on the price and type of property.

Rates are different depending on whether it is residential, a second home or buy-to-let, or whether you're a first-time buyer.

The usual system in England for residential properties means:

For second homes or buy to let properties:

Stamp duty rates are different in Scotland and Wales.

But Rightmove's latest report only covers the period up to July 11; just a few days after the stamp duty cut was announced on July 8 so it's unlikely to have had a huge immediate impact on asking prices.

Of course, Rightmove's data is only based on asking prices and the eventual price a property is sold for may well differ.

In fact, recent sales figures show property prices have in fact fallen, which is in contrast with the property portal's findings.

Halifax's most recent report, for example, found that property prices fell for their fourth month in a row by 0.1 per cent to £237,616 in June.

Meanwhile, Nationwide found prices fell by 1.4 per cent in June compared to May, taking the average house price down to £216,403.

And Lloyds predicted a 5 per cent drop in house prices earlier this year. 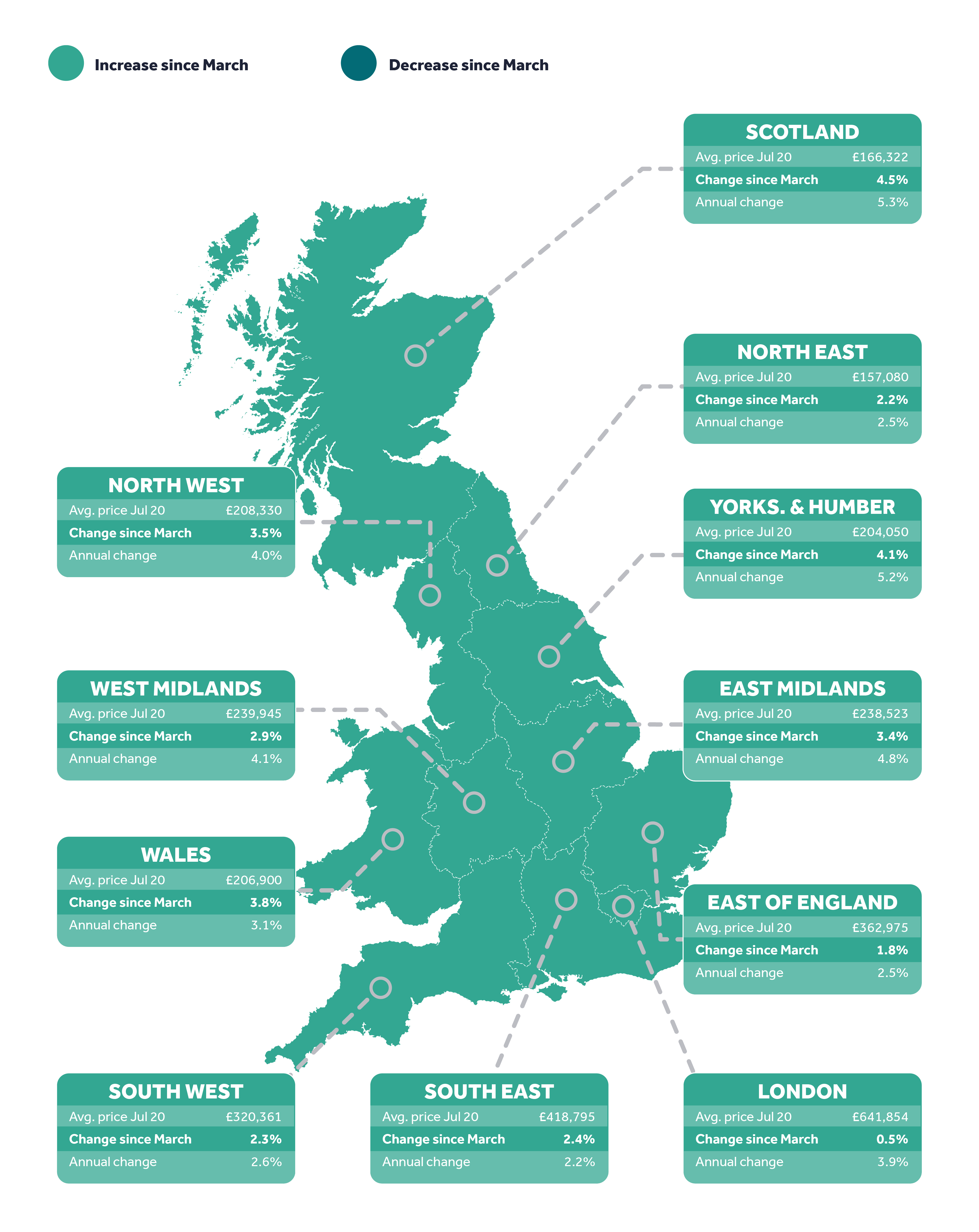 Despite perceived uncertainty Rightmove adds that 44 per cent of new listings that came up for sale in the first month after the housing market in England opened on May 13 have already been marked as "sale agreed".

This compares with 34 per cent for the equivalent dates last year.

In addition, Rightmove says the number of properties coming to market is up by 11.1 per cent this month compared with a year ago, despite data for Scotland and Wales not contributing to the full period.

On a regional basis, prices in Scotland rose by the largest amount where they increased by 4.5 per cent in July compared to March taking average prices to £166,322.

Scotland and Wales have different stamp duty systems but both devolved governments followed England and Northern Ireland's lead in temporarily cutting tax on properties worth up to £250,000 until March 31, 2021.

"The busy until interrupted spring market has now picked up where it left off and has been accelerated by both time-limited stamp duty holidays and by home owners reappraising their homes and lifestyles because of the lockdown."

Martin Walshe, director at Cheffins in Cambridge, told Rightmove: "Lockdown made those who were already considering a house move almost frantic with anticipation for estate agency doors to reopen and the increase we've seen in inquiries since rules were relaxed has overtaken any other peak I've ever experienced."