Major construction work has ended and the installation of artworks is underway ahead of the December opening of Sydney Modern, the city’s dazzling new stage for contemporary art.

“We will not be knocking this one down,” the NSW Premier, Dominic Perrottet quipped referring to the rebuilt Allianz Stadium as he marked the symbolic handover of the $344 million Sydney Modern project from construction giant, Richard Crookes, to the Art Gallery of NSW. 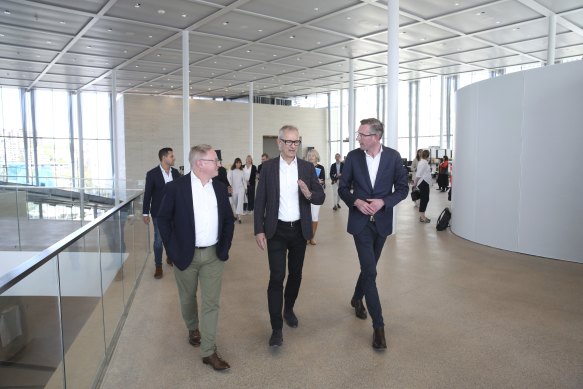 “For far too long projects like this have been seen to be vanity projects; they are not,” he said.

Ten years in the vision and three years in the building, all that remains to be completed for the Art Gallery of NSW expansion is landscaping and exterior works, and internal fit outs.

A team of 590 builders and artisans worked through COVID-19 lockdowns, unprecedented rains and bushfires to deliver the project by December 3, largely on time and within budget.

The first walk inside Sydney Modern shows the building’s cascading structure. Three major art pavilions are positioned within a soaring backdrop of glass and a 250-metre rammed earth wall sweeping across two levels. 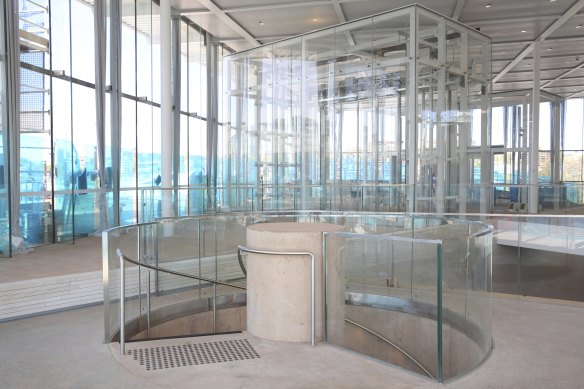 Each of the pavilions is clad in limestone bricks from among 64,000 cut by stonemasons.

The NSW Government contributed $244 million in funding, with the Art Gallery raising $109 million from philanthropic and corporate donors to support the expansion.

It’s a partnership Art Gallery of NSW president David Gonski said was forged by “art and beauty on the one hand and practicality on the other”. 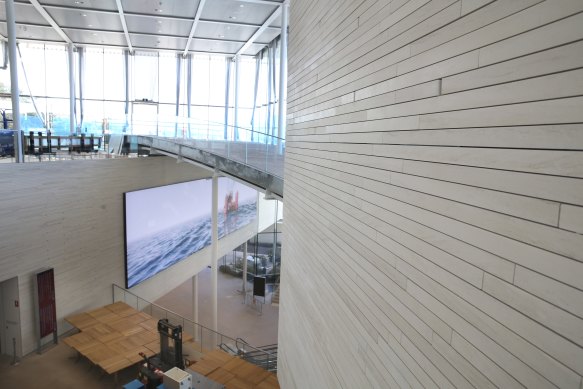 The limestone walls of the art pavilions.Credit:James Alcock

Outside, the fritted glass canopy of Sydney’s Modern’s Welcome Plaza stands seven metres above street level. A shop constructed of translucent surfboard resin will begin to be installed nearby from next week, Art Gallery of NSW, director Michael Brand said.

On entry, the public will first encounter the Yiribana gallery, dedicated to Aboriginal and Torres Strait Islander art.

Yiribana Gallery has moved from the basement level of the existing Walter Vernon-designed building to Sydney Modern’s entry level to demonstrate the centrality of Indigenous art in the building’s future programs, Arts minister Ben Franklin said.

On the lower level, the large major exhibition gallery will take touring blockbuster exhibitions of a size, Brand said, the gallery had, until now, not been able to accept.

Premier Perrottet said art was a mirror on society.

“The art that we have here today, that will come through from pre settlement to today will be able to be appreciated for generations to come. Every great city has a great art gallery.”

Challenged why the state put in four times the amount of money to rebuild $874 million Sydney Football Stadium, and Parramatta still lacked a government-supported art gallery, the Premier said Sydney Modern was an example of social good in action.

Western Sydney was benefiting from “a combination of everything” including health care, transport and education, he said.

A cultural guide to going out and loving your city. Sign up to our Culture Fix newsletter here.

18/09/2022 Lifestyle Comments Off on ‘We won’t be knocking this one down’: Curtain lifts on Sydney Modern
Lifestyle