What does the average person do if they find out a large apartment tower could soon be built just metres from their home, without their local council giving them any warning? They’d complain to the council, maybe call a journalist, or perhaps pen a letter to their local MP.

But if you’re John Wylie – investment banker, Rhodes Scholar, one of Melbourne’s most well-connected businessmen and far from the average person – you hire lobbyists to help make your case public. And you call in the state’s top planning barrister – who charges $15,000 a day – to launch a Supreme Court case against the council for the errors you believe have been made. 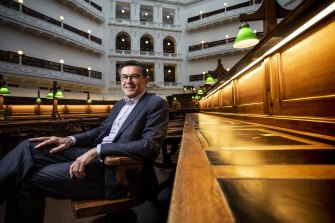 Mr Wylie is a former chair of Sport Australia and the MCG Trust, a former president of the State Library, and the former Australian chief executive of financial giant Lazard.

Along with his wife Myriam, Mr Wylie is taking Glen Eira City Council to the Supreme Court to overturn its approval of a five-storey building in Glen Huntly Road, Elsternwick.

The council approved the tower “under delegation” – meaning it never went to a full council, and only some affected residents were told that it was going to be built.

Mr Wylie and his wife were not among those told the tower had been approved. Their home in the street behind the plan is 30 metres away from the project’s boundary. 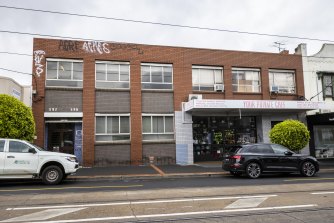 The building at 590 Glen Huntly Road in Elsternwick to be demolished for a new apartment tower.Credit:Wayne Taylor

The developer, not satisfied with five levels, has challenged Glen Eira’s approval and is asking the state planning tribunal for permission to build seven.

The project is directly north of the Wylies’ sprawling 4000-square-metre home, “Burreel”, bought two decades ago for $2.1 million.

An affidavit for the couple, lodged last week in the Supreme Court,says the council never had the right to approve such a tall building in an area where its own policies allow for only two-storey buildings. The affidavit also argues the council failed to notify the Wylies despite the project causing “material detriment” to them. 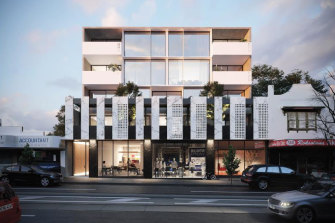 An artist’s impression of the building proposed for 590 Glen Huntly Road.Credit:Glen Eira Council

Along with Mr Morris, the Wylies have also hired lobbyists and media managers the Civic Group to help fight the proposal. The company contacted The Age over the issue, and provided a statement from Mr Wiley.

“How does a five-storey building on a site with a two-storey height limit get approved by council officers without properly consulting affected neighbours?” he said in the statement. “We’re bringing this action not just for ourselves, but for more than 20 of our neighbours.”

One of those neighbours is Jon Hinwood, who has lived in his home 100 metres west of the building site for 50 years. “My house is going to be directly affected by cars coming and going” from the apartments, he said.

He and other residents fear the precedent the tower may set. “Once this is approved there is no good reason to knock back any other seven-storey development here. And this is a little tin-pot shopping centre that has had a magical resurgence since COVID.” 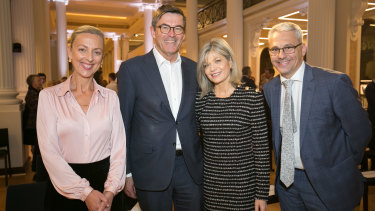 Mr Hinwood said he was never informed by the council about the plan, despite being able to see the existing two-level building on the site from his front window.

Internal advice seen by The Age, from a council planning officer sent after the Supreme Court action was first initiated, said that “we consider that their prospects are low” of winning the case.

Glen Eira’s planning director Ron Torres said the council had approved the original application for a five-storey building, but refused the developer’s seven-storey proposal in February. Healey and Co, the group behind the proposal, went to VCAT to fight that refusal.

Asked about the court case the Wylies had brought against Glen Eira, Mr Torres said the council “does not comment on proceedings before the court”. But he confirmed Glen Eira “is defending the proceeding”.

If the legal action is successful, the original permit issued by Glen Eira council will be cancelled and the site’s owner will have to resubmit a proposal to redevelop the site.

The Age on Friday contacted Wendy Healey of Toorak and Andrew Robinson of Black Rock, the owners of the company behind the proposed apartments, but did not receive a response.