Wendy Whiteley was 15 when she dropped out of Hornsby Girls High to enrol in art school. She stayed about a year at East Sydney Technical College, in Darlinghurst, eventually following her prodigiously talented boyfriend to Italy. The rest, as they say, is Australian art history.

More than six decades later, Whiteley has made a $500,000 promised bequest to her alma mater, now the National Art School (NAS) – among the largest gifts the institution has received.

“I’m trying to tidy up loose ends towards the end of my life because I don’t want to leave another mess,” Whiteley says. “There’s been enough messes around Whiteley wills.” 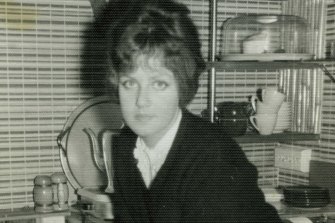 Wendy Whiteley in the Kings Cross cafe where she worked while at art school.Credit:Brett Whiteley Studio Archive

Her latest promise is her most personal, coming a month after Whiteley disclosed her intention to leave the proceeds from her Lavender Bay home, and her collection of Brett Whiteley paintings – numbering almost 2000 artworks – to the Art Gallery of NSW and the Brett Whiteley Foundation.

The Wendy and Arkie Whiteley Endowment Fund, honouring her late daughter, will be used to support female students and alumni of NAS, including help with exhibitions, residencies and acquisitions of their work for the NAS Collection.

Whiteley says she wants to encourage female creatives like herself who came to art school without financial wherewithal: “I had to work at the same time as I went to art school. I worked at a coffee shop at night to earn the money because I didn’t have parents who could pay for me.

“My mother was worried about me being a starving artist in the attic, that sort of thing, and not finishing high school properly. It was regarded as a tricky occupation being an artist, especially for a woman.”

Whiteley was taught by abstract impressionist John Passmore and sculptor Lyndon Dadswell. She was also a peer of Vivienne Binns, whose retrospective On and through the Surface is now showing at the Museum of Contemporary Art.

Binns once recalled that young women studying at East Sydney Tech weren’t regarded as promising in the same way as some male students. Whiteley says it was a commonly held idea in the late 1950s that women should be models or muses. Then, as now, NAS draws an overwhelmingly female cohort to its model of small atelier-based classes and intensive tutoring.

It was at art school that Wendy was introduced to Brett Whiteley, who was working as a commercial artist for an advertising agency and attending sketching clubs and life drawing classes at Julian Ashton Art School.

Shortly after their meeting, Wendy ran away from home and moved into a flat in Kirribilli with a girlfriend to live a “bohemian life”. “I’d sew up these loose dresses, and mine would be covered in paint. I’d have bare feet and be marching through Town Hall. It was all quite harmless.” 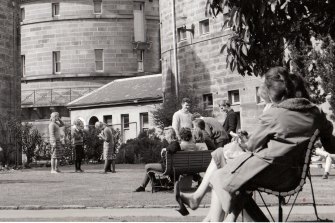 East Sydney Technical College in the 1960s on the site of the Old Darlinghurst Goal before the name change. Credit:National Art School

From high school art was “the thing I got most pleasure from and the most applause for as well”.

Although, she didn’t have any real desire to do it every day: “I wasn’t untalented, but I didn’t have the determination which I might have had a couple of generations later, like women do now. [If I had], my relationship with Brett wouldn’t have lasted five minutes.”

Wendy quit art school after a year and, for a while, studied interior design with Peter Travis at night. She tried typing school but lasted “three days because Brett would pop his head up and start making noises and throwing things through the window”. His hijinks cost her a job as an usher at the Lindfield Cinema, too.

Wendy then worked with Brett’s father Clem in his interior design business in Gordon to save for a ticket to join Brett in Italy. At 20, he’d won the Italian Government Travelling Arts Scholarship. It didn’t occur to her that she could also apply.

When the couple settled back in Lavender Bay years later she bumped into Travis who admonished her for not going on with her painting.

“To be honest I never really thought about it,” she says. “It wasn’t a big, heavy decision. We were so busy travelling, we were going everywhere together. Brett was painting in a one-room studio. And I wasn’t thinking, ‘my God, my God, I should be painting’. 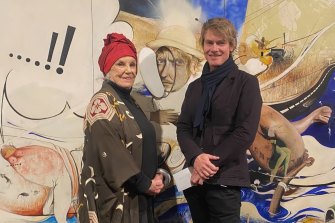 “I was having a ball looking at museums and the great works of history and wandering the streets in Italy, Paris and London.”

Later, she directed her artistic passions into the rehabilitation of derelict railway land which became known as Wendy’s Secret Garden. “I never thought of art as a hobby and I hate mediocrity,” she says. “I would be very impatient with myself if I was to just make mediocre things. Whatever I do, I want to do well.”

National Art School Director and CEO Steven Alderton has thanked Whiteley on behalf of the talented women who will benefit from her generosity.

“It is a tribute to the life-changing effect of this school that Wendy experienced herself, and as we celebrate 100 years of making art on the historic Darlinghurst Gaol site after moving here in 1922.

“This endowment offers great encouragement to our next generation of emerging artists, as they embark on their careers.”

Whiteley doesn’t think an artist can be taught but you can be taught the techniques you need. An artist, she says, ideally needs a combination of talent, visual intelligence, determination and a “special kind of grit” to bear criticism.

Whiteley’s gift equals a $500,000 donation made three years ago by the Margaret Olley Art Trust to the National Art School. This was regarded as the single largest bequest to the school in living memory.

“I just hope it’s going to help somebody,” Whiteley says. “The time has come for women to be given a bit of attention.”

24/07/2022 Lifestyle Comments Off on Wendy Whiteley’s second gift: ‘The time has come to give women a bit of attention’
Lifestyle