Did you know that Alexander Hamilton, the first secretary of the treasury of the United States and one of George Washington's most dedicated allies and trusted advisors, had a torrid affair?

The woman's husband discovered the affair and when Hamilton's political opponents, including Thomas Jefferson, threatened to expose his infidelity, Hamilton decided to own the narrative and released a pamphlet exposing it himself. 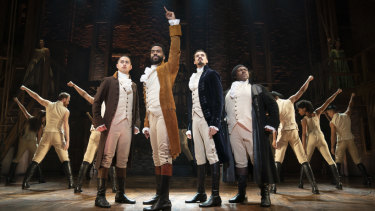 Hamilton is a rare piece that earns the hype that follows it.

It is for people who are woefully under-represented on our stages – people of colour and people from diverse backgrounds.

The resulting casting diversity, which saw non-caucasian performers playing America's founding fathers and singing about topics like slavery, immigration, oppression but, more importantly, love of country and a shared history, ended up being more profoundly political than anyone could have even anticipated.

But Hamilton is more than just the power of the music and who sings it.

It is an extraordinarily well-crafted piece of theatre. Thomas Kail's direction is extremely elegant, you never feel the effort of the show happening. Actors move around seamlessly, almost as if a painting is slowly coming to life before you. Andy Blankenbuehler's choreography is as exciting as the music and, at various stages through the show, actually forms as much of the language of the piece as what is being sung.

Hamilton is a rare piece that not only lives up to and earns the hype that follows it, but exceeds it.

22/05/2019 Lifestyle Comments Off on What it’s like in the room where it happens: the Hamilton phenomenon
Lifestyle