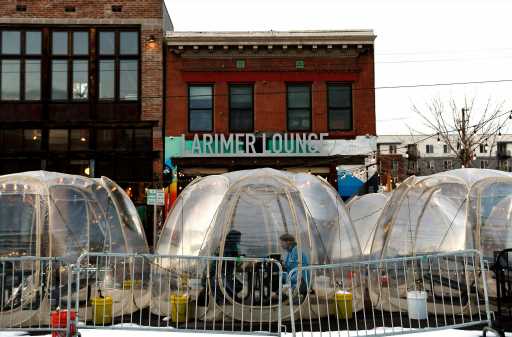 This week, The Denver Post will examine the long-lasting effects the coronavirus pandemic will have on the workplace, culture, schools, restaurants and even sports in Colorado.

Today, we look at how the pandemic has changed Denver dining.

For dozens of restaurants, bars, breweries and distilleries along Larimer Street in Denver’s River North Art District, the last nine months of suffering brought on by the coronavirus pandemic have been accompanied by one notable bright spot.

“When you own a small business in the service industry, you’re all going through similar struggles,” said Kraig Weaver, co-owner of The Block Distilling Co. His family business is based at 30th and Larimer streets, along a stretch that’s been closed to car traffic in an effort to boost outdoor pedestrian use since the summer months.

“Our block is pretty unique in that we have quite a few businesses that are all taking advantage (of the street closure),” Weaver added. “Which definitely made it kind of an attraction. It’s a complete lifeline for us.”

The Block and many of its neighboring businesses along Larimer are offering on-street dining that will continue at least through October 2021. Along with the pedestrian closure, these businesses have made other changes that could stick around for the near future and signal a longer-term shift. New formats of food and drink service; an increase in to-go options for takeout, delivery and even drive-thru; and of course alcohol to-go are all here to stay, they hope.

“A lot of people reference Europe and how similar it could be,” Weaver said. “We have our fingers crossed, but at the same time we’re just focusing on individual days right now.”

Outside of the distillery and tasting room, two custom shipping containers have been joined together to create an outdoor dining space lined with garage-style doors and windows but also protected from the elements.

Just down the block, Ratio Beerworks has expanded its street presence with a front lawn and room for rotating, walk-up food trucks. These neighbors rely on the same foot traffic to survive, but they also share more than that.

“There’s so much bartering and equipment borrowing,” Weaver said. Whether it’s lending out a forklift, providing barrels to the Odell Brewing location across the street or selling nearby restaurants’ food (such as Barcelona and Work & Class) along with their own drinks, Weaver says the Larimer Street businesses are doing what they can to support each other.

Outside Ratio on a recent Friday night, Foodhalla was selling its Spudnation loaded potatoes and bodega Cuban sandwiches from a food truck or “mobile food court,” as owners Jesus Olaya, Nicole Zajac and Alan Berger have coined it.

Rather than pigeonholing themselves to any style of cuisine, as food trucks and restaurants have done in the past, this trio of hospitality industry vets wanted to create different menus under one mobile roof, “so you can access multiple kitchens in one transaction,” Olaya said.

For now, they have two distinct menus up and running. But in the new year, the team will start Seoul Brothas Korean barbecue. And by summer, they hope to open a small brick-and-mortar restaurant with eight to nine different cuisines coming out of one kitchen, along with a drive-up window providing expedited service.

The idea sounds like a mashup of a ghost kitchen, a drive-thru and a food hall — all in one relatively compact space. They might not even bother to include dine-in seats, Olaya said.

“The drive-thru is a big thing right now,” he explained. “I think, even post-COVID, people do still want that safety zone, that barrier.”

A few more blocks away from Ratio and The Block Distilling, Sushi-Rama, Denver’s homegrown conveyor-belt Japanese restaurant, sits closed to indoor dining while still offering seating on a small patio as well as delivery and takeout. Its owner, Jeff Osaka, is planning big moves, starting as early as next month.

Like buffet-style before it, conveyor-belt sushi is tough to operate during a public health crisis. But Osaka says he plans to continue the unique service once the indoor shutdown ends. The change he will make is to combine that concept with his other brand, Osaka Ramen, as he opens and reopens more offshoots of the two in Lone Tree, DTC, Aurora and eventually Broomfield.

“As we expanded out into the (su)burbs, we thought our focus shouldn’t be so narrow-minded,” Osaka said. “I hate to use the phrase ‘something for everyone,’ but we just wanted to offer more variety on our menu besides just sushi.”

A few more things are at play in the decision to combine two restaurants in 2021. For one, the cost of real estate: “Just the rates that are out there are ridiculous,” Osaka said. And then there’s some strategy to it: Restaurateurs can either expand or specialize, “offering like six things on the menu,” Osaka said, in order to survive now and differentiate.

“So you have two different ends of the spectrum,” he explained. “Now’s the time to get creative, and just do what you do best. We have proven concepts, so it just made sense to marry the two together.”

But the two proven concepts and their multiple locations aren’t the only businesses Osaka started with in 2020. Rather, they’re what’s left. At the end of May and following the first shutdown, Osaka closed his flagship restaurant [email protected], which had been lauded as one of Denver’s best dinner and brunch spots.

With a staff of nearly 200 between the three businesses to support, it turned out that fast-casual sushi and filling ramen were easier than fine dining to make the transition into a successful post-pandemic restaurant.

Osaka still thinks about his “passion project,” though, which reflected some 30 years of cooking experience from classic French to Asian fusion. If it were to ever reopen, [email protected] would be in its third Denver iteration, but the future of that kind of business is getting harder and harder to envision, he admits. Also harder to imagine: What “relevance” will mean when it comes to restaurants after the harsh realities 2020 brought.

“I don’t want to say fine dining is dead,” Osaka said, “but I think it’s tough to be on that end right now.”

Subscribe to our food newsletter, Stuffed, to get Denver food and drink news sent straight to your inbox.